On Sculpture and Object Oriented Ontology

The following isan essay contributed by curator Caterina Molteni, originally titled Alfredo Aceto and the Anti-Heroic Object and published in the exhibition catalogue of AZURE, the first solo show in Berlin by Italian artist Alfredo Aceto, at DITTRICH & SCHLECHTRIEM.

Turin is a city that trains your skill in looking at things from far away, things in movement. When workday routine and pressure begins clutching at your throat, you go down to the Po and stroll along its bank, watching it flow.

There by the river, attempting to catch your breath, your eyes in search of some distant object come to rest on the rowers and follow their fluid movement over the water, losing all the rest of the river’s detail in the process. Azure is a convertible designed by the automobile maker Bentley to offer drivers and their passengers a panoramic ride. Evoking the colors and atmosphere of the French Riviera (the “Costa Azzurra” or “Sky-blue Coast” in Italian), the prestigious vehicle was conceived to enhance the visual experience while driving along the coast, following the imaginary lines of the horizon and the road. The flowing lines of the auto’s body develop in the direction of the sea and the land’s promontories. Azure is itself a horizon, its folding roof allows it to merge with the coastline, on the border between the fragrance and sensations of a color and the hues of an authentic landscape. 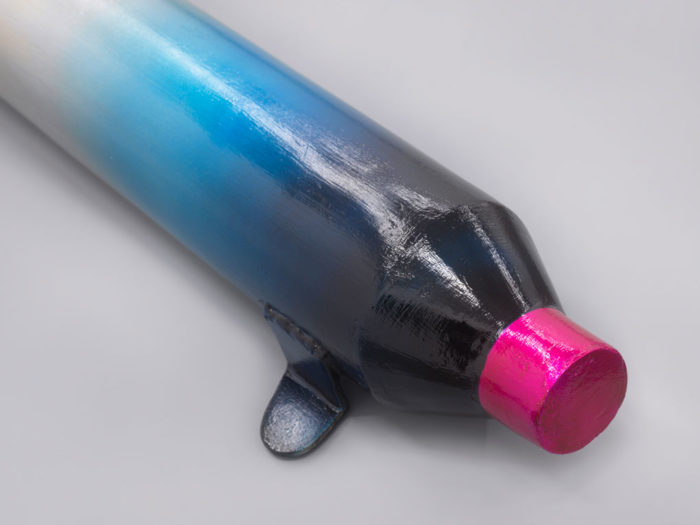 Alfredo Aceto works at the frontiers of the vectors used to define a thing and an identity. Interested in the nature of the object, he explores its attributes in order to re-conceive it in some new form that expands its narrative possibilities.

Echinoidea (2018) is one of a series of sculptures the artist developed from the shape of automobile silencers also known as mufflers. Made in polystyrene by craftsmen and then faced with fiberglass, folded over onto itself, it shimmers brightly. If the color chosen alludes to the industrial production world from which it comes, the sculpture’s structure obstructs any possible functionality by inserting into it the new attribute suggested by the title. Olive Sea Snake Digesting a Watermelon (2018), in which the muffler was structurally modified by curving a section of its narrowest part, is conceived in the same way. The artist explains his sculptural intervention as “a dreamy hunchback,” an element that allows the object to be inserted in another context and transformed into a narrative device. Both sculptures are useful in understanding just what an object means for Aceto and why it’s important for this to be discussed today. 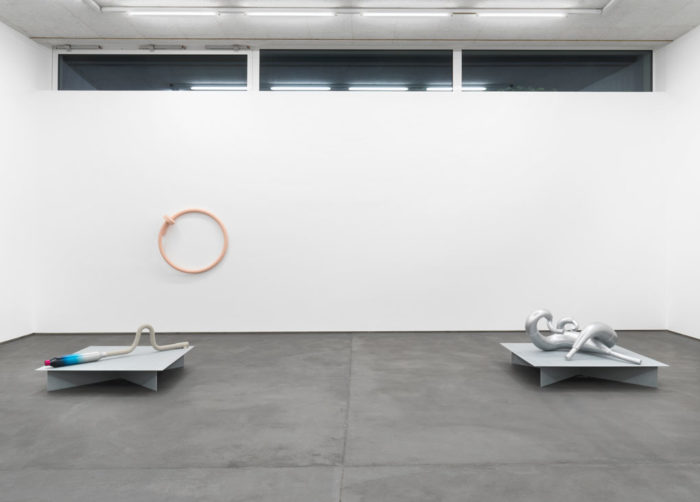 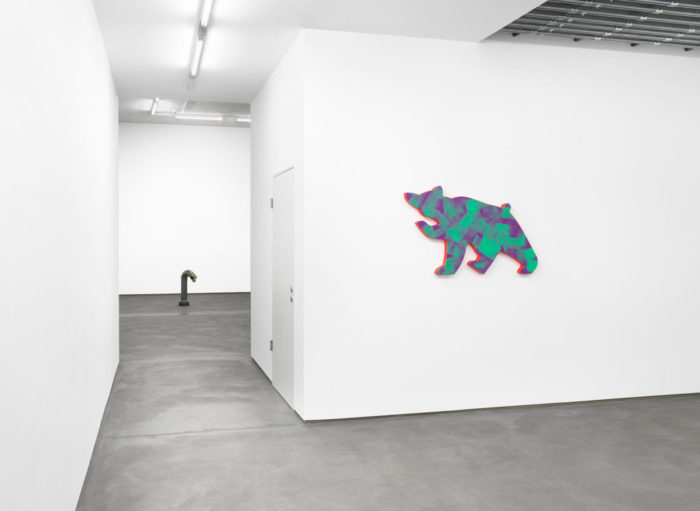 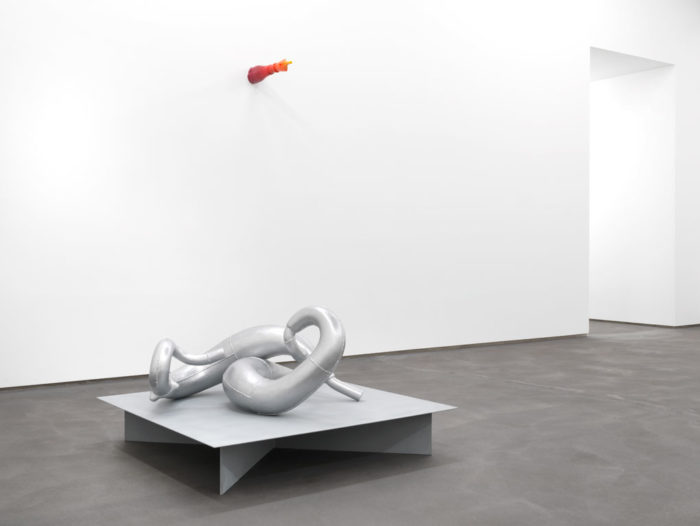 Reflections on the nature of the object and the capacity of human thought to grasp its meaning continue to enliven the international discussion as demonstrated by the success of OOO (Object Oriented Ontology) and the new materialisms that have spread throughout Europe and the United States in the last ten years. The fundamental references for these theories include Martin Heidegger’s theory of “the question of things,” according to which an object expresses its essence precisely in the moment in which it breaks and loses its functionality. In this breakage, the thing manifests itself in its simple presence, here and now. This interpretation of the object, which today applies to the autonomy of a human being repositioned as a co-star among organic and inorganic beings, has also been used to analyze the nature of the work of art, its uniqueness, its story, and the impossibility of ever really interpreting it completely. Imagining the nature of a thing as a unique body separate from any function it has might appear fascinating, yet such theories could easily be used to strengthen the neoliberalist model of thought. In the same way that the new expressions of the sharing and gig economy have been absorbed by the capitalist model, a glorification of the object’s essentiality can be easily incorporated into the moment’s dominant cultural and economic structures. In which terms may we then refer to an object today?

Alfredo Aceto offers us an ontology of the anti-heroic object. In literature, the antihero is a character apparently unable to play the hero’s role. Described as inept, he is used to criticize the dominant models of thought personified by the hero or the antagonist. The antihero enables the development of an anti-narration and a narrative work that subverts story structure as the narrative form accepted by the current historical-cultural context. Objects can also be antiheroes when they pose themselves as alternatives to the today’s two prevailing worldviews: the one, “essentialist” (the “auratic” object), the other, functionalist (the ready-for-use consumer object). The antihero object is as impoverished, blundering, and unsuited to the occasion as the protagonist of Fyodor Dostoevsky’s Notes from Underground who is unable to carry his claims to conclusion and transforms a lunch into a show of all his deepest insecurities. 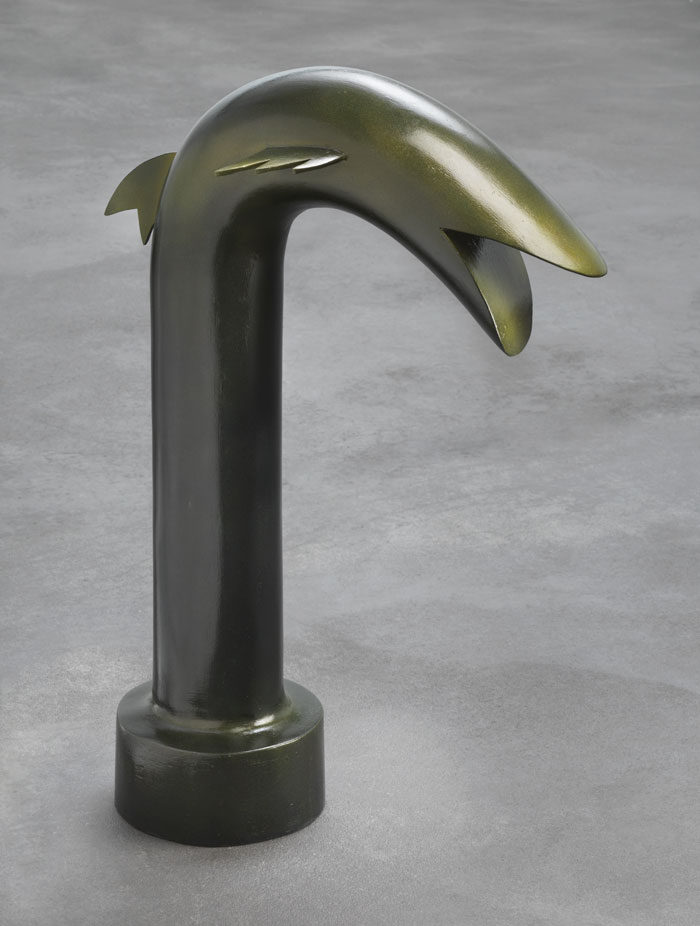 In the same way, the mufflers (Echinoidea, 2018, and Olive Sea Snake Digesting a Watermelon, 2018) imitate with their surfaces the intriguing nature of an automobile’s body of whose ecosystem they alter only an extremely technical role. Through this parody of their status, the sculptures acquire the liberty of a character capable of transforming his inadequacies into a new narrative structure. In Juste un Clou Rose (2018), Aceto considers the shape of an object with strong connotations, in this instance a Maison Cartier ring, by modifying its color and size in order to reach a formal neutrality that is stripped of any evident aesthetic allusions to the jewelry industry. Through this procedure of eliminating details, the object in the sculpture discovers itself to be a new entity, liberated from what usually defines it and limits it to one single productive, historical, and geographical context. The shape of a nail bent over onto itself can become an amulet for another culture. A muffler can transform into the image of a snake digesting a watermelon. 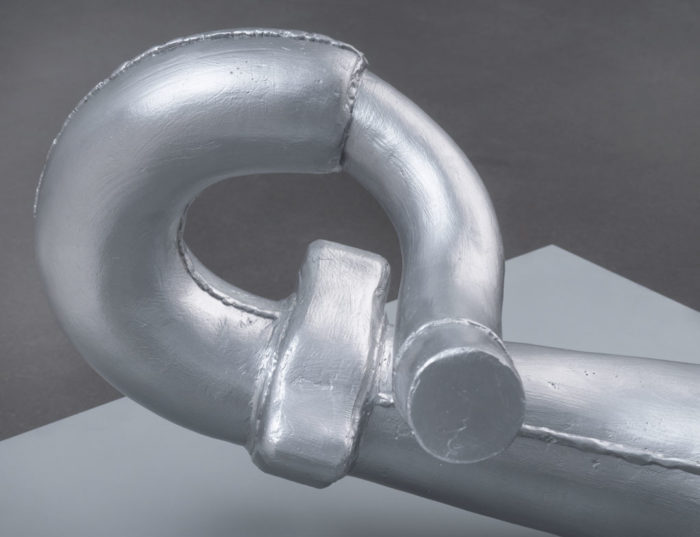 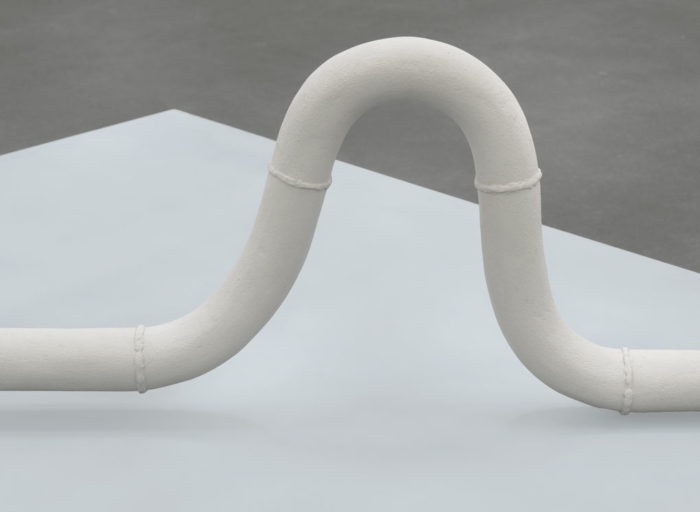 In a constellation of timid, inept objects, Gutter-Hydrant (2018), a hybrid gutter/fire hydrant with the features of some underwater creature, and Pen with an Arm (2018), an arm/fountain pen that serves as a street sign, were conceived by Aceto as index hands that guide the viewer’s gaze. Composed of double and even triple identities, these works work as “chimeras” that despite being clumsy and grotesque are capable of triggering an anti-narration and alternative model of using space, of observing and understanding works.

Regardless of whether this might be considered a show, a leisurely drive along the Trois Corniches of the French Riviera, or an illusory river cruise, what changes in the observer’s experience is the way in which the scene’s static elements are perceived and remembered. During this passage, whether sudden or of long duration, the objects and persons present lose detail and remain desaturated, evanescent memories.

Art / Exhibition
A look into the current artistic Italian production, in which narration is a chance to put speculative thought into practice
Adult Contemporary: When Genre Exceeds Form