The big battle between desire, philosophy, and sex

Liam Gillick and Gelatin shot the amorphous project and experimental film Stinking Dawn, while the display at Kunsthalle Wien turned into a shambolic movie set for a transitory period of nine days. Curated by Lucas Gehrmann and Luca Lo Pinto the shooting process metamorphosed in a short-lived parallel world, where the artists called for participation to descent collectively into a fluid chaos.

What does it mean and—more importantly—what does it take to be a Revolutionary in a Eurocentric and capitalist world, where humans are essential parts of a competitive system while they are stuck in their crisis? Formulated by economics like Luc Boltanski already claimed, the critique persists in a cultural pessimism or initiates a radical counter-reform. While artist and allrounder Liam Gillick works in various formats on the neoliberal effects on structural conditions and coexistence, the Austrian collective Gelatin transcends the existing borders in some sort of anarchic way.

Together, they negotiated the question of the revolutionary with a lot of humor and chaos, by shooting the experimental film Stinking Dawn, turning the whole process into an exhibition. In collaboration with Gelatin and Gillick, the developed script left much space for improvisation, which was both decisive and necessary to the whole project. Thereby, the display at Kunsthalle Wien functioned first as the set for the movie. During nine days, visitors were able to observe this process by sitting on an oversized sofa, a tribute to Franz West Divan, or standing around, paying attention not to get slayed by vast piles of polystyrene. More importantly, there was also the option to participate in different shoots, sometimes ending up eating pizza or drinking wine with the crew. 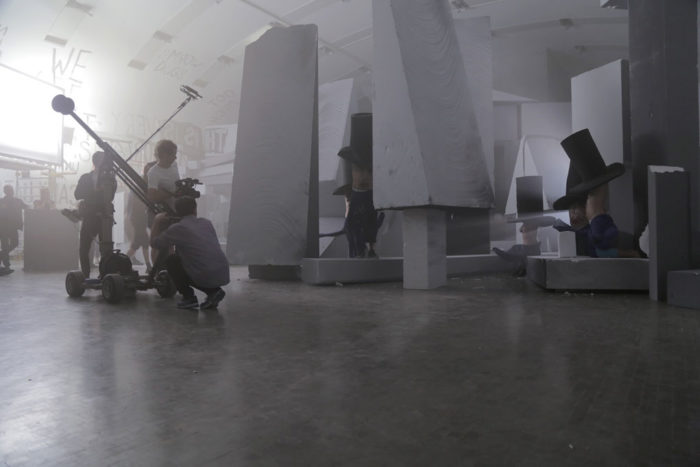 By entering the exhibition, the first irritating thing was the additional crossed out wall text, with red isolating tape, in a compatible color to the actual font of the official text for the exhibition, institutionally discussed, overturned, and changed. An undefined noise increases when approaching the show, slowly and continuously, amidst the diffused smell of a mixture of baby oil, fog and alcohol.

Giant piles of differently painted gray polystyrene blocks obstructed the view into the space. “Act like a pig” and other mostly classic anti-capitalist slogans, adorned the walls along the polystyrene. Of course, in the expected wild manner of Gelatin. Between costumes and polystyrene beer cans, notes from the script and a wheelchair were lying around. Genital dresses in shapes of pink, brown, and yellow at disposal to wear. In passing the chaotic entry, the center of the stage is an even bigger polystyrene’s construction. Those different size blocks are constitutive of the alternated, brutalist architecture of the set. According to the script, the entire crew modified the setting in a slightly dangerous and improvised manner, so the display remained in constant transformation—from a forest to the nightclub.

Liam Gillick wore a suit, sunglasses, and bath slippers, while other crew members dressed in quirky underpants or genital costumes. The occurrence was accompanied by an autonomous, inclusive and hilarious atmosphere in this mysterious lego world made of polystyrene. They created a space, where everything was possible—also, the dedicated crew made of colleagues, friends, and friends of friends. Besides the four main protagonists, there was no pre-existing cast, wherefore all characters were fluid.

The whole script evoked a generic negotiation of a quarter-life to mid-life crisis by questioning existence and future, or it wouldn’t be a movie made by Gelatin and Liam Gillick. In the attempt to deconstruct the hierarchy, the shoot involved a steadily changing process and dissolved binaries deliberately. The search for meaning posed the philosophical questions of a Eurocentric welfare society, and ended up in the form of a devastating anarchy doomed to failure. Moreover, the main protagonists, four young white privileged men, failed in a narcissistic manner in surmounting any crisis of meaning. 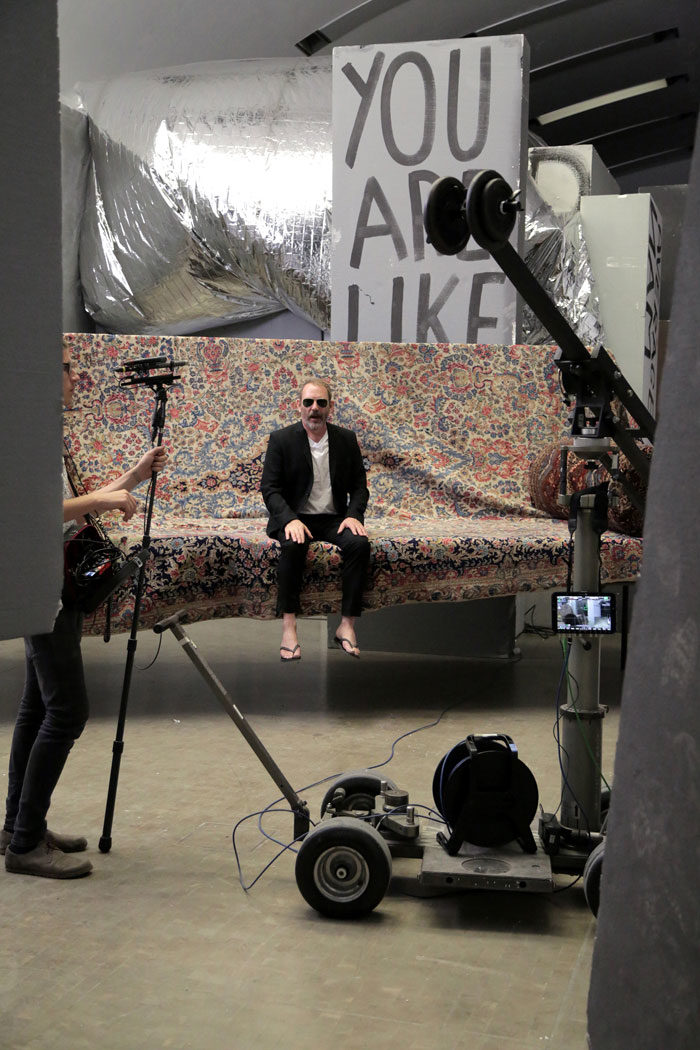 By observing this rather long-lasting real-life performance, improvisation, anarchy, and disorder manifested alongside supplementing the context of the general sense of the human overburdened by the capitalist system, looking for his place in the competitive Western world. Despite the presence of naked male bodies, during the shooting nudity and sexuality were part of a fragile and intimate negotiation. Not least, the participation of the collective Young Boy Dancing Group, who deconstructed sexuality and gender to conquer the limits of narrative through an intensive performance with lasers in butts.

However, conventions and dichotomies within groups were put out of action beyond the time of the shooting. During the process Stinking Dawn briefly beat the laws of a cultural institution. The shooting did not start before afternoon and ended at night. The holy display functioned as a place to dwell, eat, drink, without knowing what was going on. Shooting plans were changing daily. When the brief moment crept in, that recipients thought, they understood what was going to happen, what the shoot was about, they got disabused after two hours the latest. The strength of this exhibition project is not the theoretical negotiation of the capitalistic effect on individuals. Nor is the empty set architecture which functions beyond the retrospective slideshow or the post-shooting exhibition. Stinking Dawn fascinated for its transitory character and the opportunity it offered to be part of the crazy parallel world during those nine days. The process created an addictive factor to this real-life performance due to the fear of missing something and the awareness about the rarity and uniqueness of this happening. With its amorphous character, nothing was predictable, so Fomo started, and reflected on the paradox of the economic structure beyond the anarchic idea. Kunsthalle Wien became a temporary world, a home that, despite an unmanageable gray, filthy chaos, lured to linger.

What remains is the worn polystyrene, incoherent word fragments on the walls and a photographic documentation of what has already been missed. Now it is time to wait till fall for the edited movie.

Paula Thomaka currently works for Kunsthalle Wien and writes for Viennese based online magazines. Besides, she is a student in Cultural Studies at the University of Hildesheim.
feature filmGelatinLiam Gillick
The Biggest Other

Exhibition / News
How difficult is it for a troubled masculinity, a masculinity under siege, to be gentle, or ironic or ambiguous?