How difficult is it for a troubled masculinity, a masculinity under siege, to be gentle, or ironic or ambiguous?

MACHISMO is the third of Villa Lontana’s series of contemporary art exhibitions in collaboration with Fondazione Dino ed Ernesta Santarelli’s Collection. Curated by Jo Melvin and Vittoria Bonifati, the series aims to create fluid platforms of encounter between the sculptures and works from the collection with contemporary art practices.

“In this exhibition we concentrate on how machismo’s presence haunts contemporary art practice. This vast topic is embedded in Western art’s history, in its representations of power and strength and in displays of technical virtuosity. Machismo’s iconography is both weighty and light. It traces to the ancient gods, Apollo, Heracles, Hermes, Dionysius, Pan and Bacchus; wisdom, power and strength, to masculine beauty in conflict and to emasculation. MACHISMO creates a dialogue between selected sculptures from the Santarelli Collection and thirteen contemporary male artists across generations from Belgium, Italy, India, the Netherlands, USA and the UK, who in different ways interrogate and critique iconographies of machismo. The media of film, sound, painting, performance and sculpture in works by Bas Jan Ader, Marcel Broodthaers, Gino De Dominicis, Jeff Gibbons, Emiliano Maggi, Michael O’Mahony, Luigi Ontani, Cesare Pietroiusti, Gianni Politi, Robert Rauschenberg, Prem Sahib, Raja Ram Sharma and Franco Troiani, experienced in juxtaposition with the ancient sculptures, creates new dialogues with the construct of machismo. 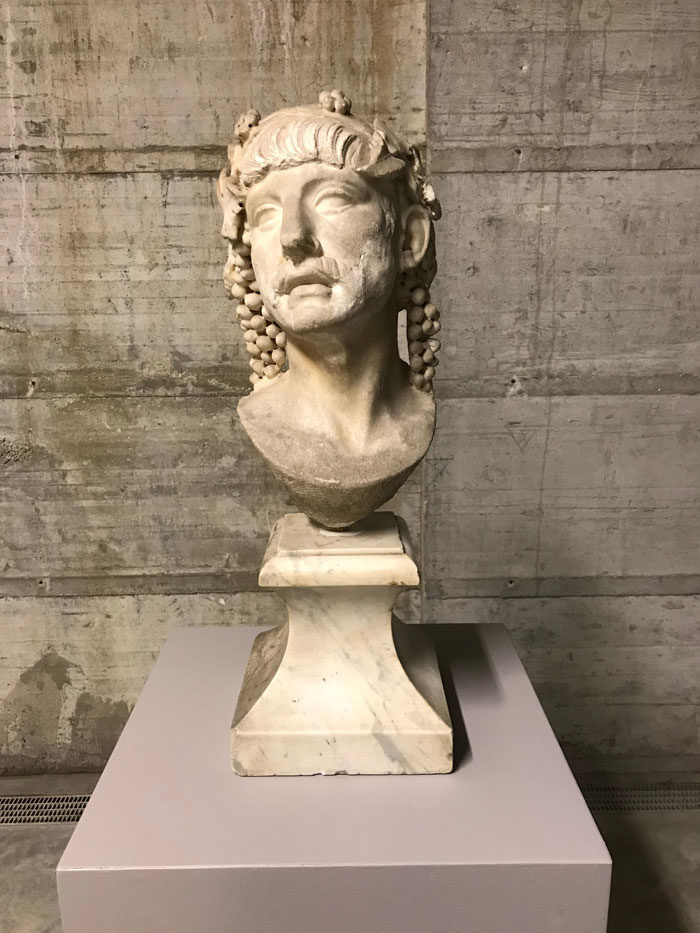 As women, we are interested in how men’s celebrations of masculinity might present an implicit critique of the negative associations of the macho, while enabling a reflective, open and more tentative exploration of the term. The word ‘machismo’ is the Spanish term for masculinity and ‘macho’ is simply man. Since the 1940s its widespread use is applied to toughness and virility. It suggests a desire for the invincible; it infers power and courage. Other macho traits such as presence of mind, stoicism, and bravery are overlooked by the negative associations. To speak about macho necessarily implies gender. It is difficult to speak about gender without inflections of fluidity and ambiguity. We are looking at a masculinity that may deal with its feminine as well as its masculine nature, but that aspect is not necessarily the main focus of intention. How difficult is it for a troubled masculinity, a masculinity under siege, to be gentle, or ironic or ambiguous? How possible is it to remain masculine while simultaneously rendering a critique of its performative gestural nature? 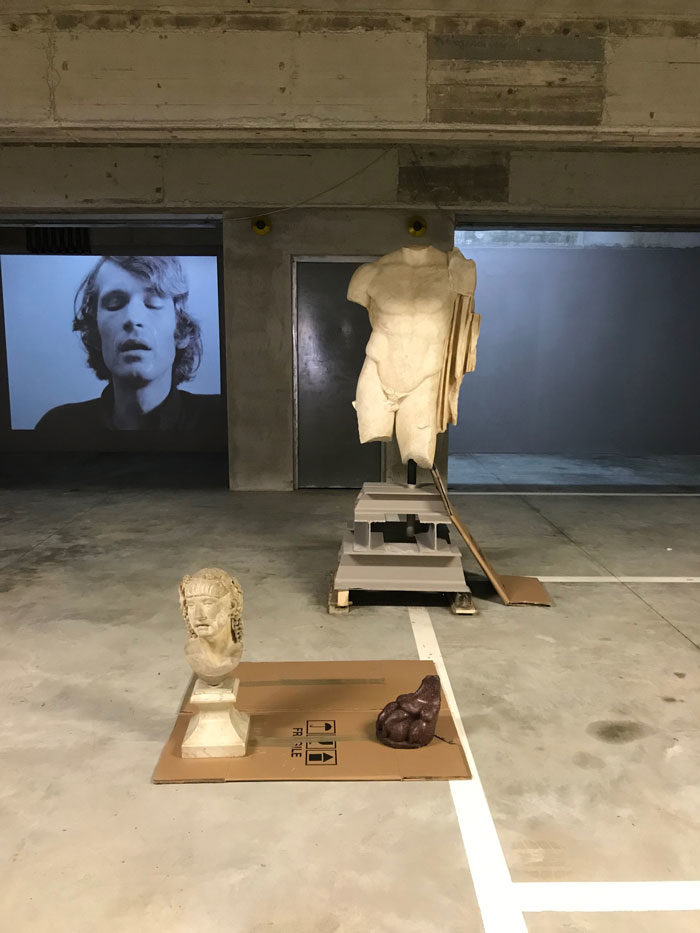 Critiques of patriarchy over the past sixty years have redressed gender driven assumptions in many ways. The current preoccupations arising from #MeToo and ‘toxic masculinity’ bring these urgent considerations more pressingly into the public domain. In some discourses the negative connotations of “machismo” have eclipsed the definition, so that it becomes difficult to speak of without a disclaimer.

This exhibition takes place in Rome. Various myths of the Founding of Rome told by the ancient Romans as the earliest histories of their city are relevant to understanding the intertwining relationships between machismo’s histories with that of the city. These stories survive today. The most famous is the story of Romulus and Remus, the infant twins who were suckled by a she-wolf in the 8th century BC. Another earlier account claims that the Romans were descended from Aeneas, the Trojan War hero, who escaped to Italy, and whose son, Ascanio, was the ancestor of Julius Caesar and Augustus. The ancient Romans were certain of the day Rome was founded: April 21st. This date marked the sacred festival of Pales, the goddess of shepherds and livestock. The celebration was called the Parilia (or Palilia). Pales was a triple goddess regarded by some as male, by others female and by others still as both male and female. She presided at childbirth to protect the mother. She protected women and men, animals and crops in their growth and fecundity. In this all-seeing capacity she also presided over war and death. Pales’s multiplicity was the holy trinity in ancient times, the capitoline triade which was later inherited by the Catholic religion in a mystery that includes a father, a son and a holy spirit, where the feminine is totally missing. Today the 21st of April is celebrated as Rome’s birthday. It is the day Romulus and Remus traced the sulcus primigenius. The figure of Pales has been forgotten. 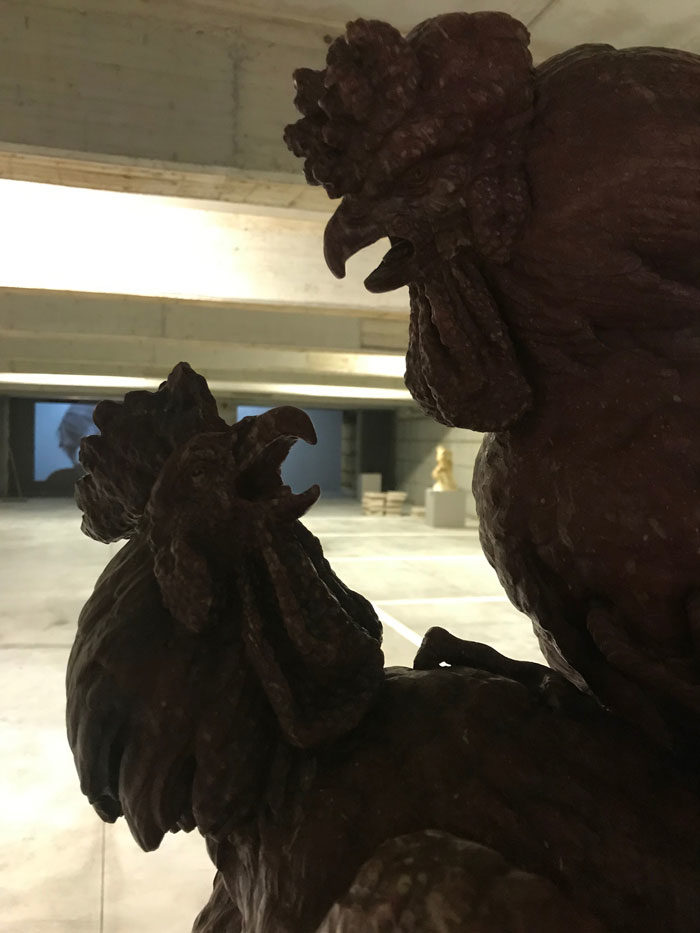 The collection of the Fondazione Dino ed Ernesta Santarelli spans from the Ptolemaic period until the XIX century with a particular interest on Roman statuary and coloured marbles from Imperial Rome, architecture fragments, marble samples, glyptic and painting on stone. A number of works in the collection triggered the thought processes for this exhibition. A sculpture from the XVIII century of cockerels fighting (an ancient sport) is carved from a reddish shell stone, like the colour of porphyry. Porphyry marble is immensely hard and was used by the Pharaohs, by the Roman emperors and through centuries to signify strength and power. There are two busts, one of Dionysus (III century AD) and the other of emperor Trajan (II-IV century AD). The iconography of this particular Dionysus is remarkable because, as well as its ambiguous feminine character, it has a moustache. The Emperor Trajan was the Emperor under which the Roman Empire reached its maximum dominion. The XVI century sculpture of Prometheus is strikingly poignant. Prometheus aspired to become a god; and the enraged Zeus, King of the gods, condemned him to eternal torment whereby on every third day an eagle eats his liver. A series of XIX century Indian miniature paintings from the Jaipur school depicting scenes of the epic Ramayana, showing a masculinity that is both strong and gentle.”—Text by Jo Melvin and Vittoria Bonifati.