Cécile B. Evans, What the Heart Wants (still detail), 2016. Courtesy the artist

Limits and Possibilities of the Moving Image

The main character of Alex Garland’s film Ex Machina is an attractive female cyborg called Ava. In order to obtain freedom from the laboratory where she is locked up, Ava seduces the engineer that is testing her intellectual abilities and kills him and her creator. Apparently, she could not find any better strategy to escape the control of humans than playing the well-worn role of the femme fatale. Sci-fi cinema is in fact populated by attractive female cyborgs. Unfortunately, sometimes things go wrong and smart engineers become victims of cunning sexy androids. This is not the only cultural stereotype that cinema projects on artificial intelligence (AI). Cyborgs and intelligent machines are generally represented by cinema with a whole range of (western) human habits, as if to be intelligent necessarily means to look like humans. This process of anthropomorphization indicates the incapability of our culture to accept and deal with the emergence of non-human agents. “What was once attributed to the obscure and infinite night” the philosopher Matteo Pasquinelli claims “is now projected onto the abstract abyss of computation, data centers, and machine learning.” 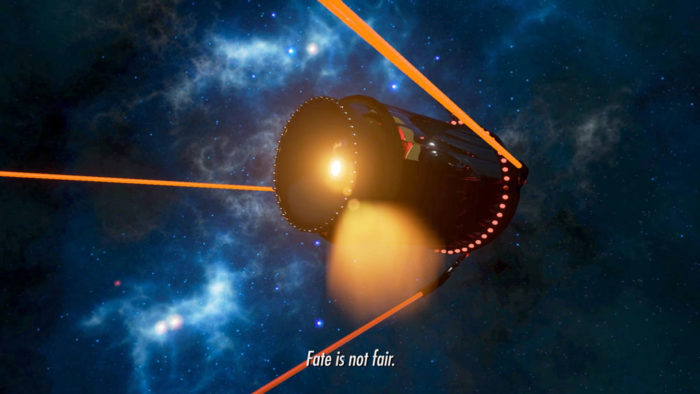 The excess of virtuosity, the spectacular special effects, and the frenetic sequence of the scenes of recent films that deal with the AI, such as Blade Runner 2049, Prometheus, Tau, the already mentioned Ex Machina, indeed betray a complete void of imagination. All the efforts made to impress the viewer with overloaded sensations hide banal narrative structures similar to those of soap operas, or, in the best cases, borrowed from novels or previous films. In both instances, we witness the exhausting repetition of the same ideas. There is evidently not even an attempt to explore this unprecedented reality, which is emerging as a total alterity. Computation and AI, in fact, operate according to their own logic, which is only partially knowable and not reducible to ours. All the features that are specific to human intelligence, such as individuality, consciousness, intentionality, are not applicable to artificial forms of intelligence. As argued by the media theorist Benjamin Bratton, rather than to identify AI as an individual agent, we should think of it in terms of an expanded multi-layered surface, that constitutes the very environment in which we live in. AI and computation are indeed radically reshaping the world from the inner strata of our subjectivities, up to the planetary geopolitical order. 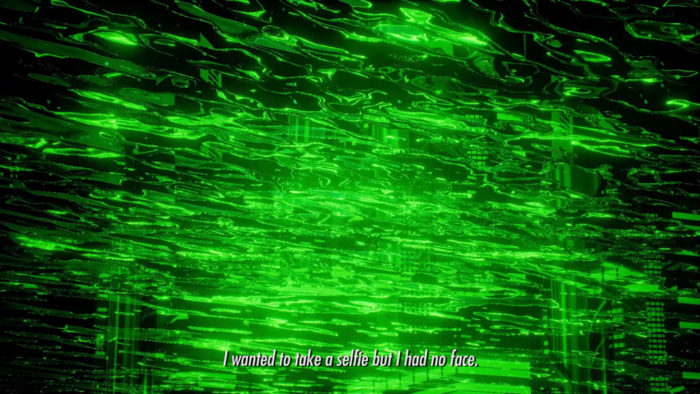 In light of this, one could ask whether cinema is intrinsically unable to represent this new reality in a way that is not distorted by our anthropocentrism. Perhaps this medium is not compatible with the issues that we have outlined above. However, although this might be true in the case of what we could call “mainstream cinema”, the moving image still offers the expressive tools to tackle the novelties brought about by the most recent development in the field of computation and AI, as it is able to provide an “inhuman” point of view. As Gilles Deleuze argues in The Time-Image, the moving image indeed operates on a pre-linguistic and pre-subjective level.  Therefore it does not employ already existent languages, instead it creates the very conditions for new processes of signification to take place. For this reason, the moving image is able to explore and cope with unprecedented realities. 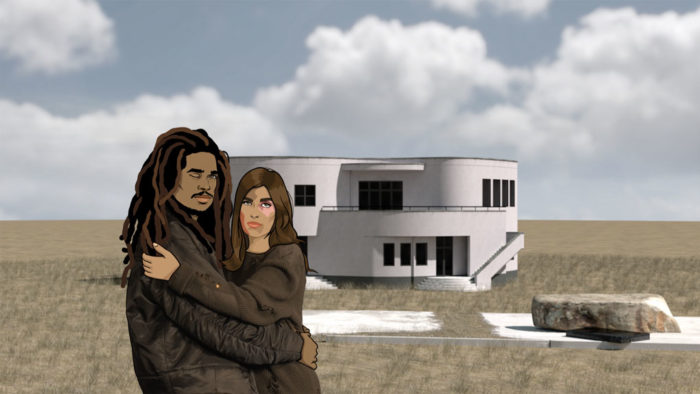 Cécile B. Evans, What the Heart Wants (still), 2016. Courtesy the artist

Films by artists like Cécile B. Evans, Lawrence Lek, Metahaven, Jenna Sutela glance into this new emerging reality without adopting an anthropocentric point of view, thus coping with its decentralized and non-linear logic. As a result, in their films, the coherent sequencing of the events is challenged. Twisted, looped, juxtaposed, and stratified, the flow of images is structured according to a constellative order, rather than a linear one. Linearity and chronological temporality, according to which modernity has developed, are called into question, as they do not seem to be adequate to account for the radical novelties introduced by the widespread adoption of computation and AI. “This was the future”, the humanoid system Hyper states at the beginning of Cécile B. Evans’s What The Heart Wants. An expression that seems to replace the more familiar “Once upon a time”. Here, the boundaries between past, present, and future blur. The future becomes an actual reality that can also be placed in the past, while past events reappear in the present as memories detached from the subject, thus becoming autonomous agents.

Along with linear temporality, the individual subject is inevitably also deconstructed. “I’m the city I live inside of, I’m the living, the dead, and the undead”, Hyper claims. But it is not only the AI that does not have an individual unity. In the constant interaction with machines, that overstimulates people’s mind and perception by exposing them to a continuous flow of stimuli, individuals also lose their identity with themselves. The usual coherence of language, thought, perception, and memory is shattered. “You may think that I’m a girl, but there is no girl. Don’t ask who I am”, the protagonist of Rob Schröder and Metahaven’s Possessed warns. Her inexpressive blank stare effectively communicates her not-being-there. Contrasting with this process of desubjectivation, Lawrence Lek’s Geomancer’s, a self-conscious AI satellite fallen on 2065’s Singapore, that wants to be an artist and asks: “Can you smell the jasmine in springtime?” sounds so incongruent that its all too human ambition is even more disorienting. 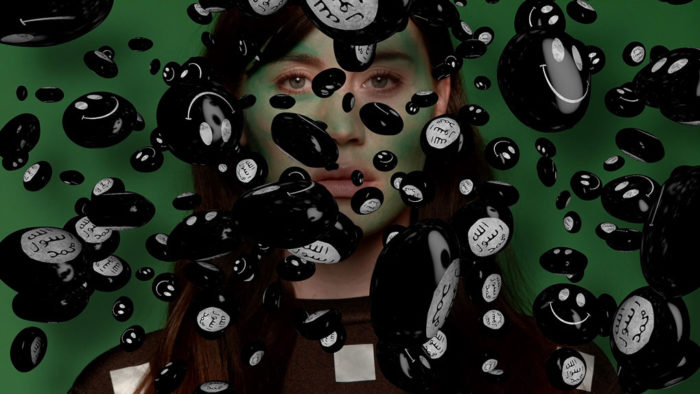 Metahaven, The Sprawl. Propaganda about Propaganda, 2015 (still). Courtesy the artists

In this overwhelming process of disembodiment and deterritorialization, where “all that is solid melts into air”, to quote the famous passage from the Communists’ Manifesto, the Foucauldian apparatuses of discipline such as prisons, factories, asylums, through which power used to be exerted, have vanished, substituted by immaterial and ubiquitous apparatuses. Their absolute pervasiveness makes them almost unperceivable: “A planetary ceiling. A floating megastructure. A cloud. A glittering river. A mirror. An untruth. A lie. A technology. A pathology. A desire. A platform. A road. A map. A network. A destination”, the Russian-speaking narrator of Metahaven’s The Sprawl lists over upside-down footage of the streets of a city, struggling with defining the nature of this new form of power, which seems to escape any possible identification.

Being human language, as we have known it so far, so evidently inadequate to cope with forms of radical alterity, the Finnish artist Jenna Sutela focuses her artistic research on the possibility to develop new languages looking at complex living and artificial systems that operate on a non-representational level, such as, slime moulds, bacteria, computational systems, and machine learning. In her most recent audio-visual work Nimiia Cétiï, drawing from the “Martian language” developed by French medium Hélène Smith in the nineteenth century, Jenna Sutela intersects artificial neural networks with footage of the movements of space bacteria, hinting to the possibility to develop forms of interspecies communication.

In the age of total technological mediation, as many aspects of our private and public lives are increasingly affected by automated reasoning and artificial forms of intelligence, the whole sociocultural system based on the centrality of the human agency is severely undermined. This also challenges the traditional way in which reality is perceived and represented. For millennia, civilizations have been founded on coherent processes of representation of reality, grounded in ordered systems of symbols and images. This is now no longer possible. Reality is distorted and diffracted through multiple lenses. Processes of representation have been automated and have become hypertrophic, thus bursting into a chaotic storm of images that scatters fragmented replicas of reality. A new aesthetic paradigm is therefore needed. A paradigm that a new generation of moving image artists is developing, which rather than being based on a coherent symbolic order, is constructed as a complex constellation of heterogeneous elements.

Felice Moramarco is a London based writer and curator, founding director of DEMO Moving Image Festival. His practice and research focuses on rethinking art’s agency in light of the current cultural, technological, and political paradigms shifts, exploring the ability of artistic practice to operate critically and configure new realities.
AICinemacomputationmoving image
Ecologies of Feeling

Cinema / Review
Notes from IFFR 2019: a filmmaker reflects on a week's worth of new films
The Moving Image Out of the Screen