On furniture performativity, staging the soap opera of the modern home

This text introduces a foretaste of one of the different aspects emerged during the collective research program Global Modernism Studies of the Bauhaus Lab, an initiative conceived by the Bauhaus Dessau Foundation, that offers a platform to emerging curators for conceiving an exhibition, a publication and a symposium over a three-month period. Each lab focuses on a modern design object that serves as a thematic anchor and starting point. This year’s protagonist is a dining table designed in 1936 by Marcel Breuer for the Londoner furniture company Isokon. Currently the table is part of the Bauhaus collection at the Victoria and Albert Museum. Considering the different social lives of this particular object allowed to unfold more in depth some aspect of the English household realm during and after the 1930s, and to investigate the history of exhibitions related to the performative way of “displaying the household” within a long list of educational and promotional shows. 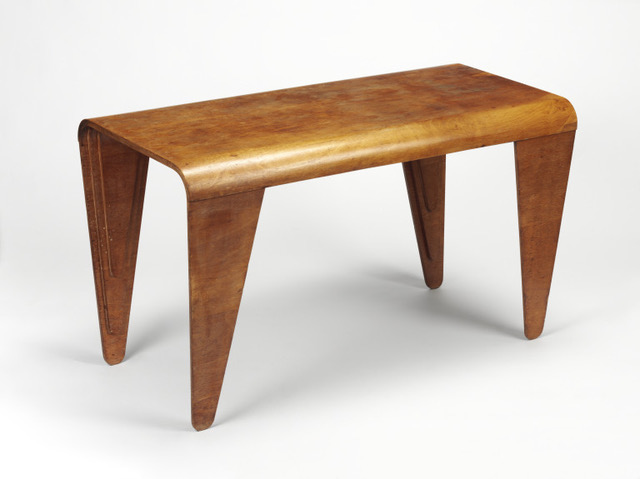 The Ideal Home Exhibition was an annual show initiated in London in 1908, and described by the Daily Mail newspaper as a marketing event. Its relevance was due to the fact that it was bringing together all the aspects of daily domestic life, in the ideal and necessity of having a modern home. Held at the Olympia, at first a launch pad for a wide range of products, all the possible ways of domestic living where displayed in the separate expositive units of the exhibition.

Through the (re)consideration of all home interiors’ features, this event remains compelling for it conceives the household itself as a showcase, a laboratory for rationalized labour that would inform and influence every single stage of the design process. Among other similar cases, the show was used as an opportunity to educate the audience, thus build some sort of propaganda promoting good design and modernism.

Along with the Ideal Home Exhibition, another important actor of the London scene was the DIA (Design and Industries Association). Founded in 1915, it organized and distributed exhibitions, lectures, BBC broadcasts, school textbooks and popular pamphlets throughout the years. The main motto and aim of this entity was indeed “Fitness for Purpose”—the term fitness to be understood here as a logical correlation between utility and beauty; as an idea of efficiency that would go hand in hand with the idea of beauty, in which the form is a result of the function.

In the context of domestic interiors, the symbolic mission of this efficient furniture leads us to investigate how this way of thinking was appropriated to convert pure form into a representation of social significance, an aspect still relevant in the posthumous reflection around material culture and design anthropology. It becomes clear at this point, that to transform the domestic environment into a comforting dimension for human beings was necessary to let these commodities perform a psychological function as well. Suddenly, the household became the place where to test new technologies, so to minimize unnecessary steps and save labour. 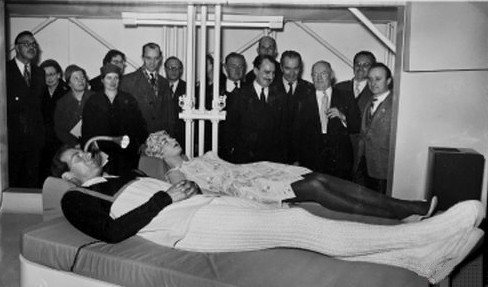 Alison and Peter Smithson, House of the future, 1956.

For instance, the importance given to ergonomics emphasizes the possibility to read the household as a field where one could train to fit in society at large. As shown in the Ideal Home Exhibition, the interaction between body and furniture had become central. In the different home sceneries set up in the show and designed to satisfy any request, there were actors who would demonstrate and simulate how the objects worked. This kind of performance re-enacted, literally and symbolically both on and off stage, the functioning of the human body itself. An important case was the project of the House of the Future realized by Alison and Peter Smithson, for the 1956 edition of the Ideal Home Exhibition. Later on, in the 1980s, in a small and comfortable utopian kind of space, the actors presented the benefits of their new house the future wearing space suits, against any kind of decorativism: the house already featured an electric and a heating system and air-conditioning, a boiler, cooking, laundry and refrigeration systems. 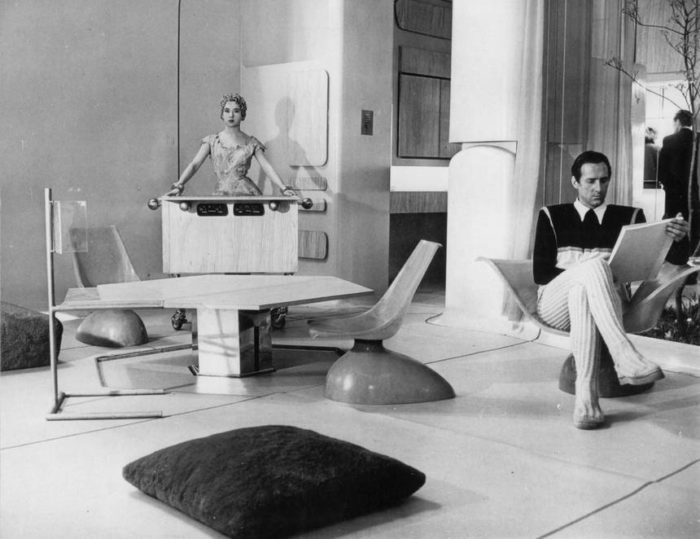 Alison and Peter Smithson, House of the future, 1956

Devised as a full scale scenographic mock up of a living unit rather than an architectural project, the House of the Future was concretely the scenario of a speculative simulation intended to trigger a theoretical discussion on a plausible future lifestyle, yet strictly connected to that historical moment. This intention is also visible in the exhibition catalogue. After a short preamble, where the author of the text describes the house and its structure—an author of unidentified genre take us for an imaginary tour through the space. The performativity is immediately made clear in the introduction: “Having disposed of the technicalities, supposing we take a look round the house. Anne and Peter, who live here, will make us feel welcome. We can use the front door broadcast telephone to announce our arrival.”

The thin line between the commodity and the symbolical character of the object was deliberately blurred by this fictional element attributed to the domestic sphere, as staged in every single unit of the exhibition. The actors were practically embodying and enacting their homes and their domestic appliances themselves. This situation, and many others all over the Olympia, was in equal measure comforting and disturbing.

The documentation of Anne and Peter’s daily routine metaphorically recalls the photo taken by Erich Consemüller in 1926 at the Bauhaus in Dessau; a woman wearing an Oskar Schlemmer mask, surrounded and absorbed by her Bauhaus environment: the chair, the dress and the head. As art historian Juliet Koss mentions in her essay Bauhaus Theater of Human Doll is significant to this kind of performativity: “Immersed in the performance, a spectator cannot resist imitating a performer’s movement. Figuratively speaking, the relationship is reciprocal. Just as a spectator mimics the actions of the performer, the latter imitates its spectator.” 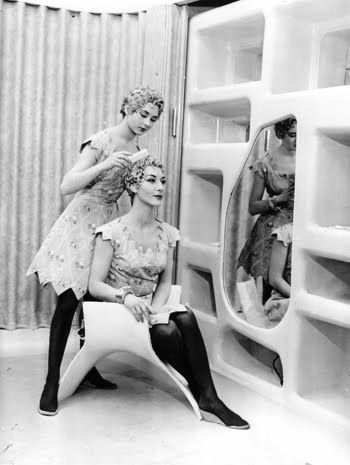 Alison and Peter Smithson, House of the future, 1956

The Ideal Home Exhibition somehow surpasses the very concept of performance by creating something to be understood as a form of pastiche, a game of seduction which rewrote many principles, management rules and power structures within the domestic landscape. This interpretation leads us to the etymological roots of the term “performance” as analyzed by art historian and curator Marie de Brugerolle. In French, the term perfournir means to “define a shape or to finish it,” while in English we find the word “furniture” linking us back to furniture objects.

By following this approach, I do not necessarily want to make a connection between this new way of thinking modernity and Brugerolle’s idea of post-performance, but rather highlight the fact that the relationship between cultural aspects, productivity in the workplace (in this case the domestic) and technological systems was already inherent to the concept of performance already in the modern household, even before our contemporary times. 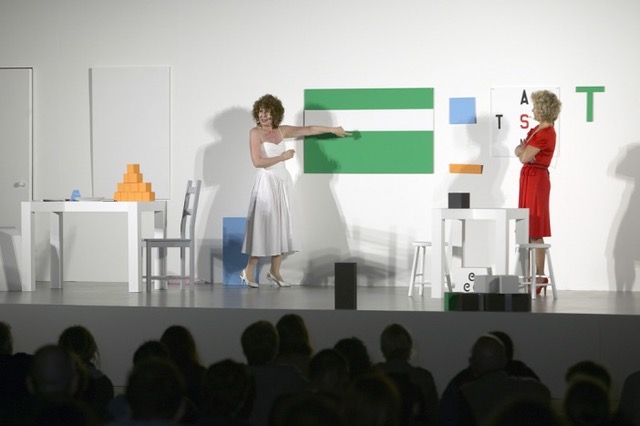 A more polysemic way to read this practice links us to a figure that was the point of departure in Brugerolle’s study, namely the artist Guy de Cointet, who considers props as a constitutive part of performance. The example and the approach of the artist, in as much as the House of the Future allow us to detect an attempt to translate language into visuals. In fact, House of the Future is nothing but the formulation of a pedagogical approach turned into visuals. Through the relationship between props, home appliances, stage and actors, a new knowledge production method was delivered and shared with the audience. This strategy is underlining a subversive potential in the daily practice, conversation and routine. Who would ever find suspicious a conversation on a glamorous haircut in the dressing room of the House of the Future, or a chat around food in a Cointet’s performance?

In this setting, the use of a medium such as the soap opera and its specific aesthetic, was the perfect way to present this “utopia for sale” as the place where the performance object could keep its ambiguous status of character, status symbol, accessory and new arcadia. “Like the process of novelization, which turns a film script into a novel, (…) Cointet theatricalizes the TV series and turns the quotidian into a terrain, constantly appropriating a revelation of reality.”

Before anything else, in its fluid nature between an exhibition and a fair, Olympia was a massive performance platform, that staged the very potential of the modern society, as this new way of living didn’t need to be interpreted but rather to be staged. The Ideal Home Exhibition was in a way a parody, yet through its approach it was able to generate a direct exchange between actors and subjects.

Lisa Andreani is a Milan based writer and curator. Her research focuses on the idea of circular engagement among architecture, design and contemporary art as performative and transversal education.
furnitureIdeal Homeobject
Abstraction and Translation at Lax Bar

Art / News
A social sculpture that turns viewers into actors, but also a pretty good bar!
A Speculative World