A non-linear personal diary towards reading and domesticating space

Interested in the history of interior decoration and ornament, Jessy Razafimandimby explores in his work the possibilities of the concept of a “home.” For Droit de Visite de Digestion, he took inspiration from an article he found in La Semaine de la Femme, a weekly lifestyle magazine distributed in Lausanne from 1936 to 1962. Tainted with prewar conservatism, the publication contributed to define the role of women as primarily wives and mothers with articles about fashion, gastronomy, and interior design. Customary of French etiquette a “visite de digestion” was expressed by the guest of a dinner paying a courtesy visit to their host no later than eight days after the dinner had taken place.

Curated by Elise Lammer, in the framework of Alpina Huus, Razafimandimby developed a performative installation that contributes to break down the promotion of good manners and etiquette that was, and still is, promoted by a bourgeois, classist system. After one month spent living in the exhibition space, the artist transformed it into an imagined domestic space, in which a new series of drawings, watercolours and sculptures serve as the script or the score of a hypothetical dinner. Razafimandimby completes the picture both literally and physically, with a performance in which he incarnates all the narrative characters and elements at once, during a visit paid to his imagined hosts. 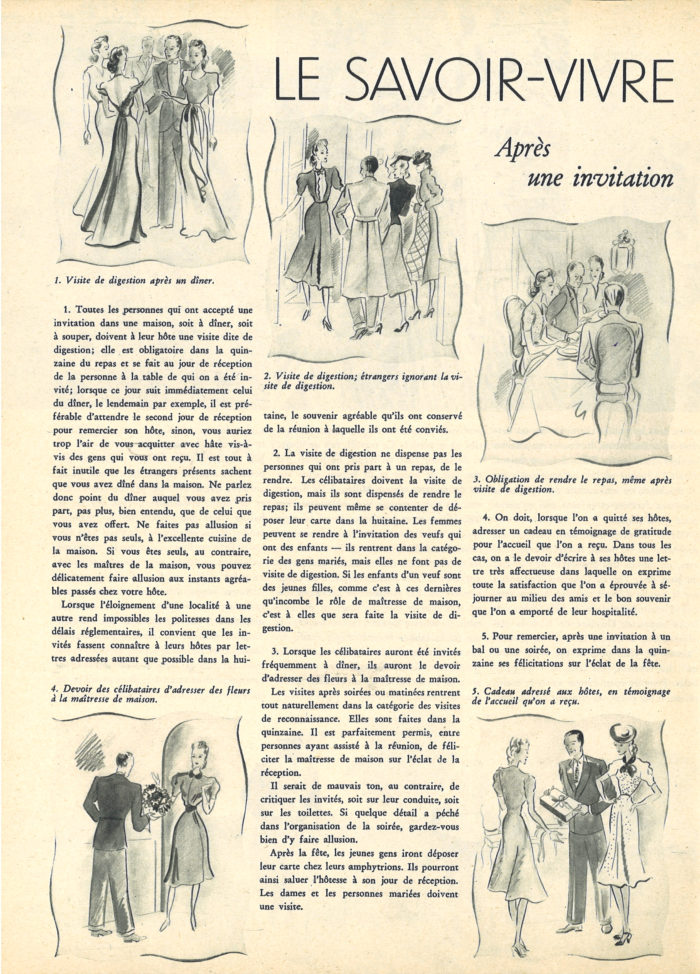 The timeline imposed by this residency feels like a self-imposed assignation, leading to a truly site-specific reflection and production; like a manipulation of the real until it turns around: a fall into fantasy?

August, 20th
I’m going to start a diary, like an immediate production of ideas through writing, drawing and object-making. I need to send you a picture of a sort of chair that I made for this exhibition in a flat. (I found it on the street nearby, the same morning of the opening. I dismantled it entirely, only to rebuild it with slightly smaller proportions; legs, back and seat are now smaller. Basile Dinbergs and I made a  drawing of a grey fish drawn only with tin that now sits on it). 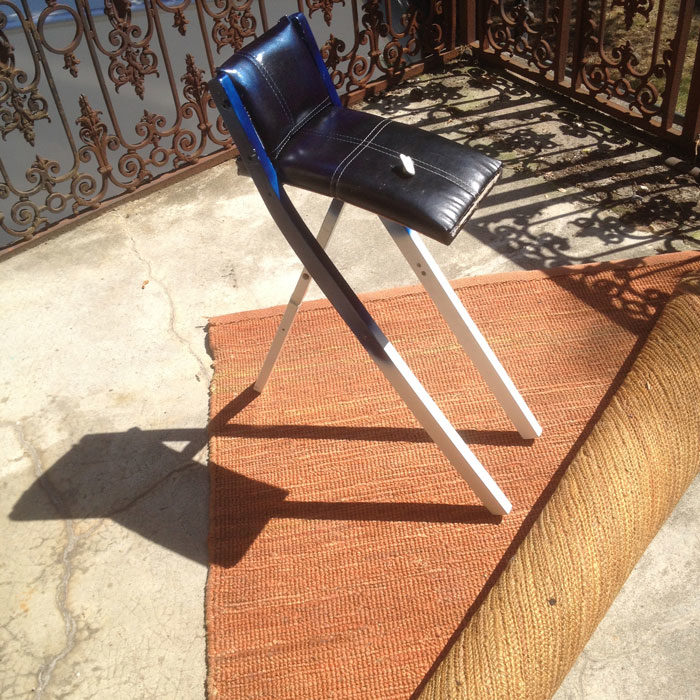 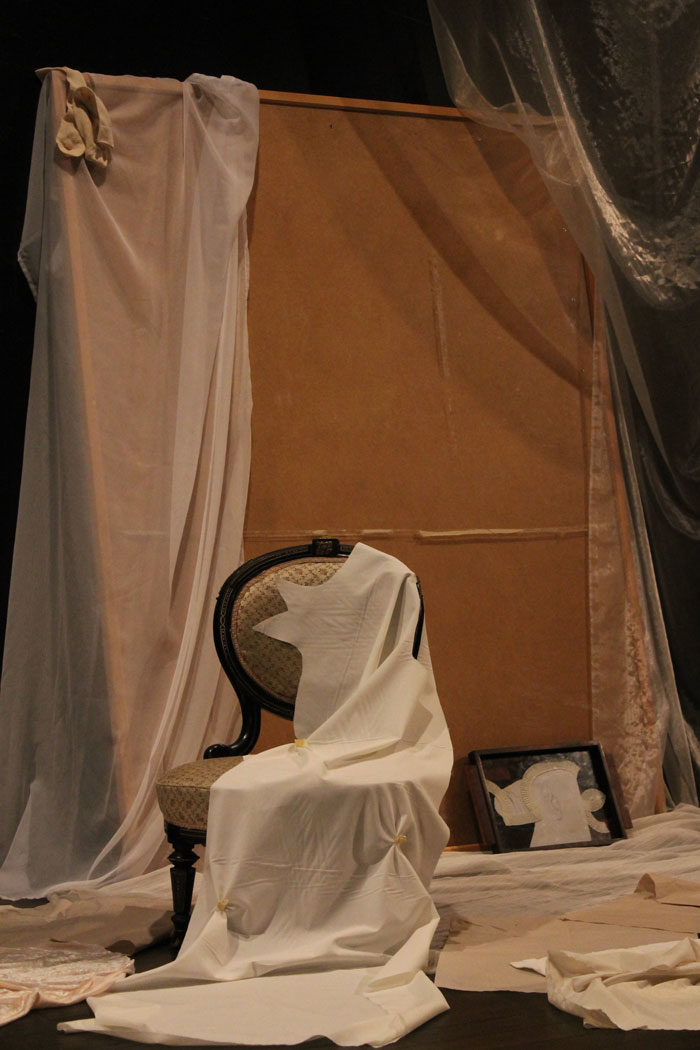 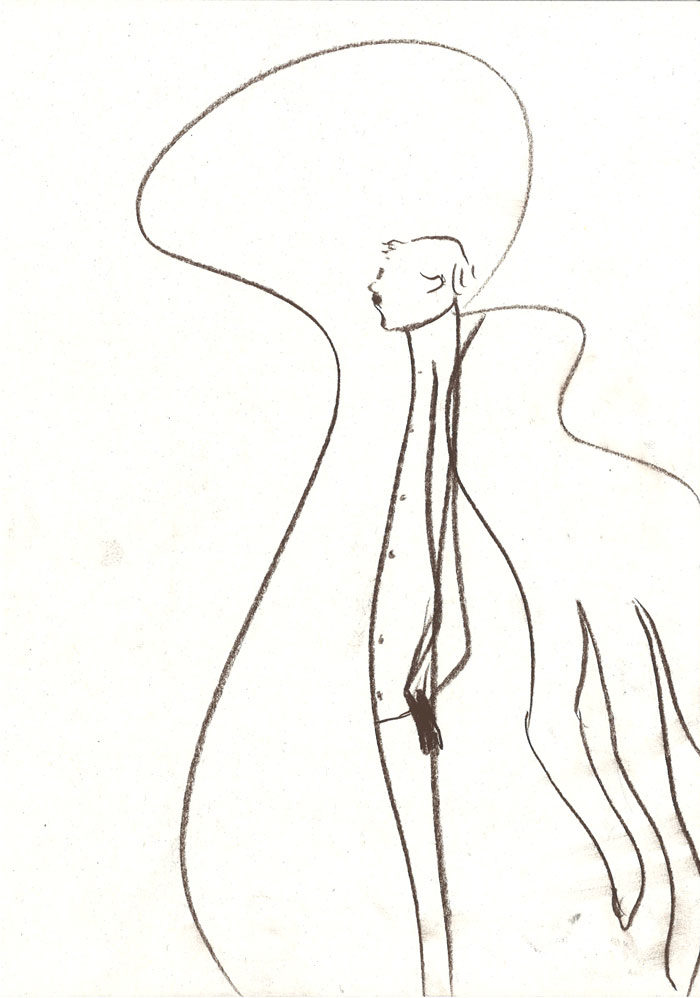 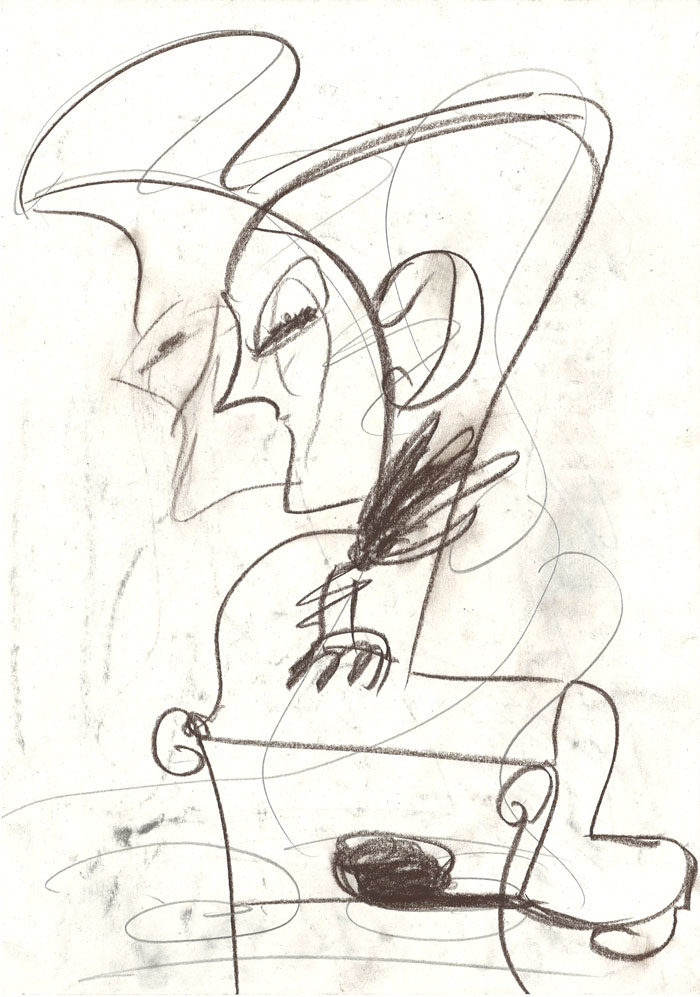 August, 3rd
The title, still undecided, will come out of a text that I will soon write. This text will be built after a vocabulary from the mundane way we speak in daily life, whose expressions can sometimes be so empty that they prevent any reflection in light of the sentences that are too often used. Like when a mockery is felt like a compliment “you dress like my grandfather!” I’d prefer to use a simple language, a primal politics of the little things from daily life that everyone applies for themselves and at home, so that I can better unlearn everything that once was learned.

Thinking of the title, I’m still not sure. I had some ideas, but most of them in English and that annoys me. So I thought I’d send you this text I wrote for when I improvised at a jam session. And because I quite like the story, and the sound of the heel (le talon), I was wondering if breaking up the text could be a good option: “La Mesure du Talon sur le Quai”—The Beat of the Heel on the Platform; “Le Train, Le Talon et Le Quai”—The Train, the Heel, the Platform; “Le Talon de D.O.”—D.O’s heel; “Talon sur le quai”—Heel on the platform; “Sur le côté ensoleillé du quai, swing bas… Talon”—On the sunny side of the platform, low swing… the Heel. 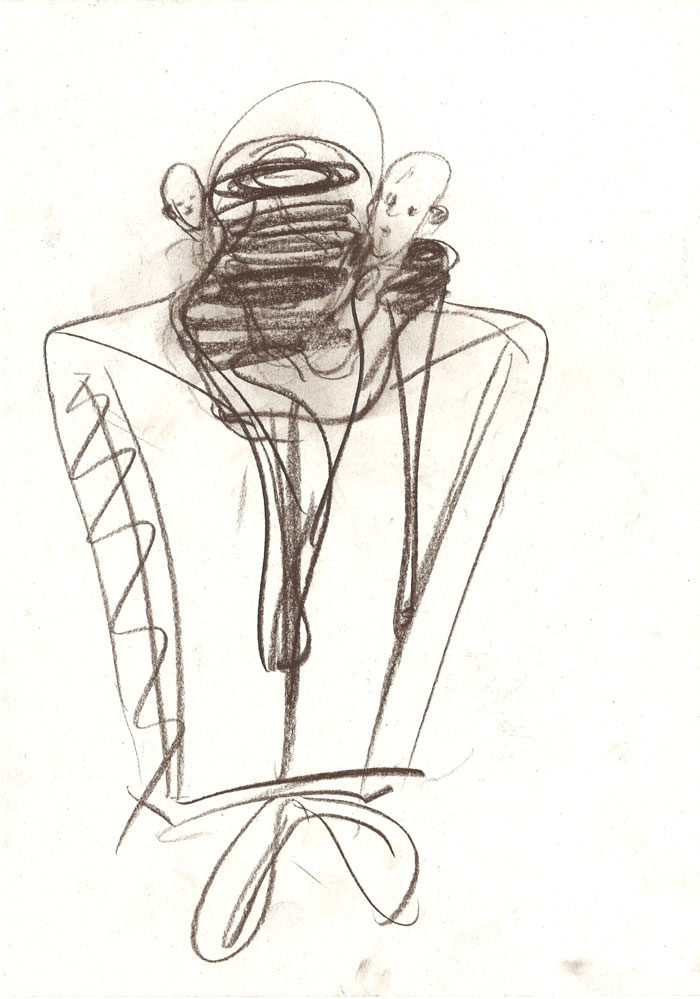 October, 30th
If the title is arranged as follows: “Droit de Visite de Digestion”—Right to Visit of Digestion; it’s divided into two parts: first, Droit de Visite. Then, it mentions Digestion. I’m worried this choice of words will be misleading for the viewer, who might think the project is only about the art of the table and a nice dinner… I’ve learned about this custom in a page of La Semaine de la Femme in the good manners section. You can learn more about the Visit of Digestion here. 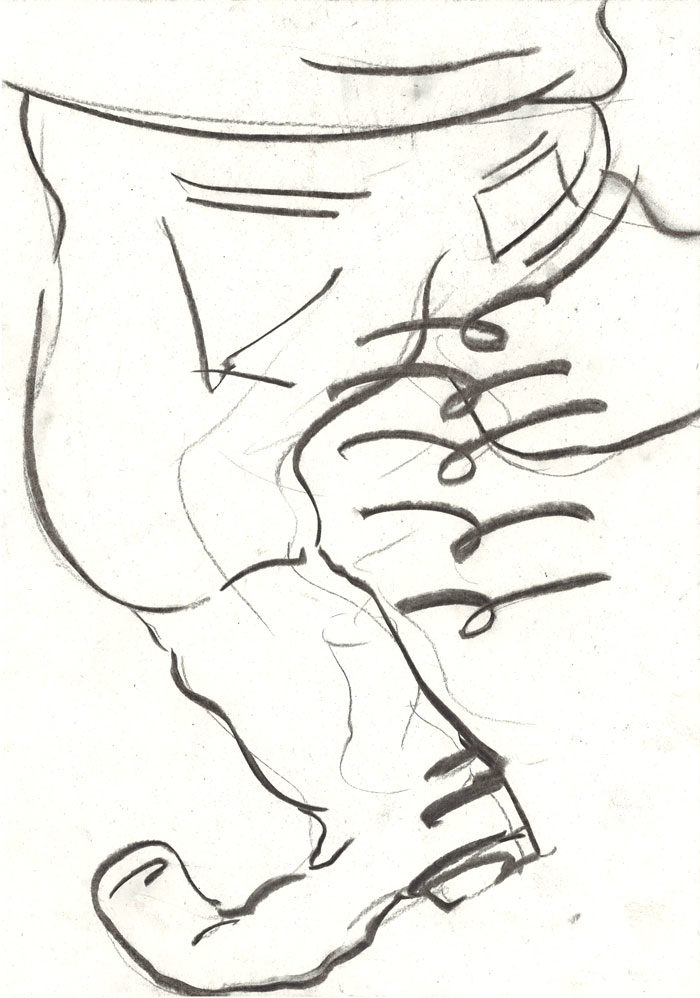 August, 3rd
Production (before the residency): a diary; write the lyrics for two or three songs; drawings and drawn objects—I’m not yet sure if I want to print anything yet, for example I’d love to have two large curtains with motives and text, either hand-drawn or printed.

October, 28th
Quick thoughts about/around Droit de Visite de Digestion: take charge of your home; ten guest rooms is not enough; we can speak in the dark, where we keep quiet, where we lie, say the truth, unveil reality’s brilliance, including everyday mishaps and significant events. In the dark, we can speak freely to one another. 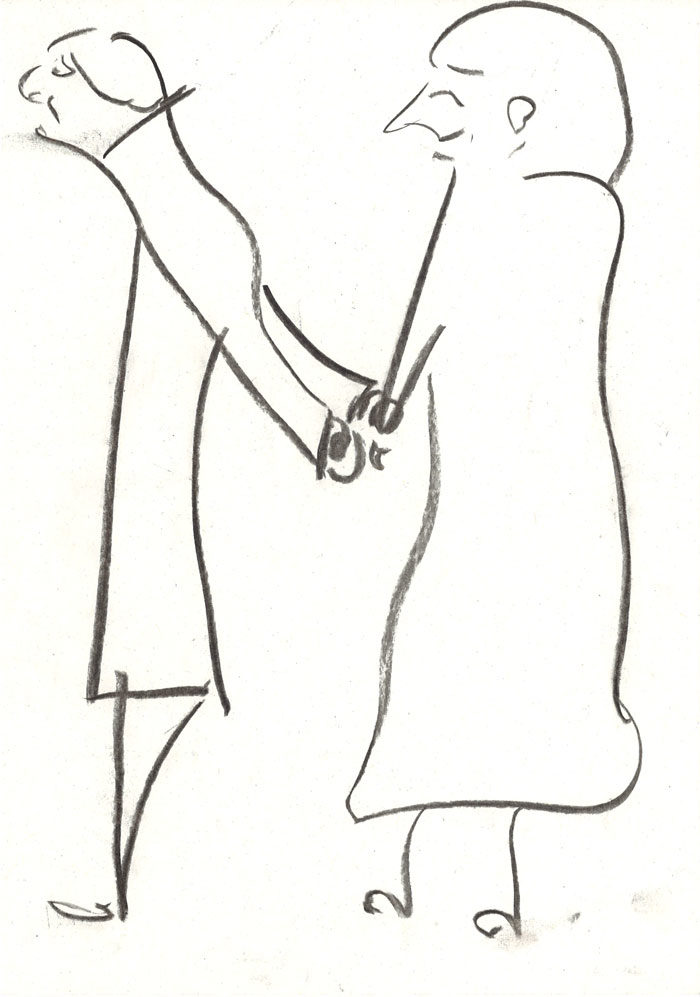 August, 5th
This research can’t possibly led without a resident who tries to challenge the physical and conceptual limits of the institution. In any case, I’d love for this project to continue developing forms of using the body as a tool that helps reading and domesticating space.

There is the concept of  “Addictive laziness” a recurring idea in my work that we could explore together. It’s Ivan Gontcharov who speaks about “oblomovism” a strange facet of laziness  in which we (might) find a form of wisdom. There is a great deal of work involving bodily “posture” (when I’m lying on the floor, or near to it—I like it a lot). I say maybe or conditionally, because it’s the versatile aspect of laziness that was always intriguing to me. I personally try to get rid from certain traits of my own laziness, while I try to improve others because they enliven me. Make of this game an ambivalence. The theme of the project will focus on youth and its excesses: betrayal, lies, loss and failure, incomprehension, tensions, daydreams, compassion, abandons, oppressions; a youth desired as active, politically engaged, beautiful and modern. 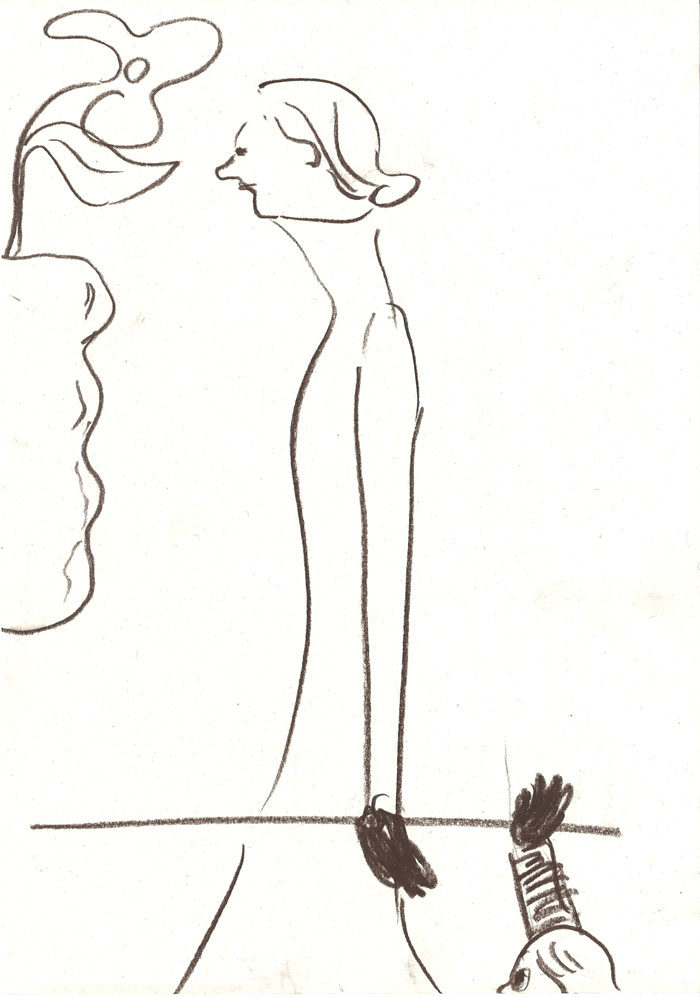 October, 30th
Invention of the characters: they are reminiscent  of the homes in which we lived, and those of which we caught a rapid glimpse, those oozing the smell of dinner, those where we dreamed of living, and those that we’ll never know or have not yet been invented.

In this black box creation won’t be about adding darkness, it will rather be about generating ideas while spending moments of uncertainty, sharing, (maybe even collaborating with others), developing our senses (while mopping the wooden floor with wax, to reveal its shininess and to trigger childhood memories). Once a week or every two weeks. The exhibition will be an installation in which there will be little clusters of works arranged in groups. The works will punctuate the space, disrupting our senses, but also how we experience things, how we read a situation, and how we surround and are surrounded by our daily environment. 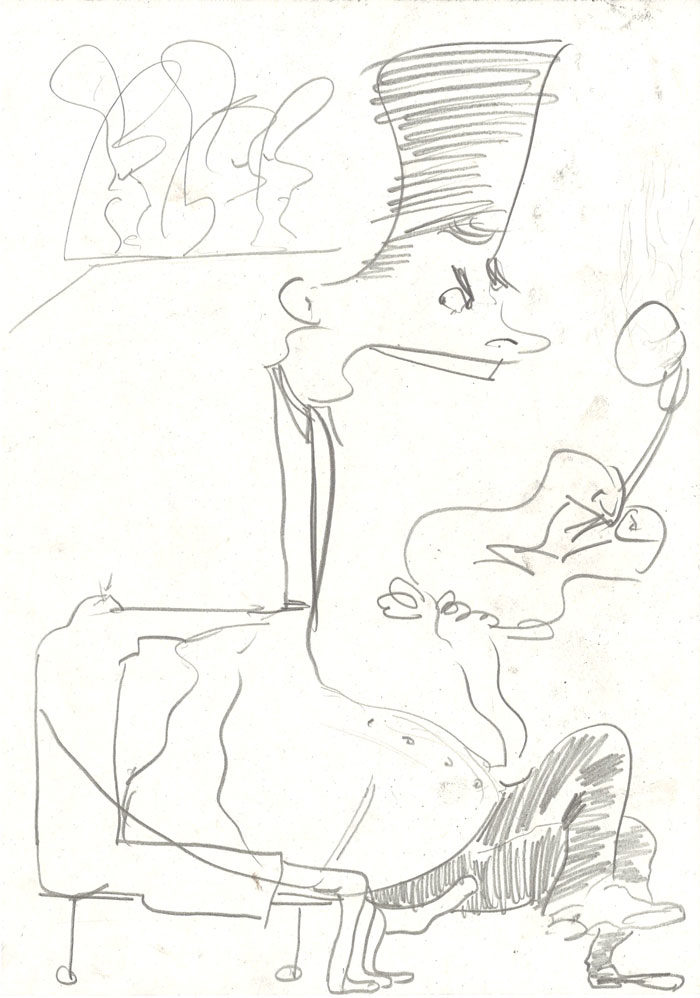 September, 2nd
In the Arsenic’s studio, the structuring elements will be used as supports or displays for drawings and sculptures according to various hanging systems. Example: the curtains will be soft walls (according to Gaston Bachelard in La poétique de l’espace (1957) “we shall see the imagination build ‘walls’ of impalpable shadows, comfort itself with the illusion of protection—or, just the contrary, tremble behind thick walls,  mistrust the staunchest ramparts.”) First because of the darkness of the theater hall, almost closed on itself, opaque, without any possible penetration of the gaze through the hallway or outside the building. There is the idea of creating a contrast between the dullness of the space with an installation of works (drawings, display furniture, etc.) that are all bright and more or less light in colors.

The curtains are hung inside out, in order to show the “negative” side with the seams  and expose what is usually hidden in a theatre. The dark wooden floor multiplies darkness of a room that should be bare, without carpet or any type of coverings. I would like to project some light from the outside, maybe coming from behind the large windows (if that’s possible, I need to double-check with the technicians). The only sources of light should come from outside the room. For now, I can only imagine three: one from behind the windows, outside; the other is trough the little door leading to the backstage; the third one channels the light from the hall with the help of a doorstop (this might be a rolled carpet on which I hang another drawing). 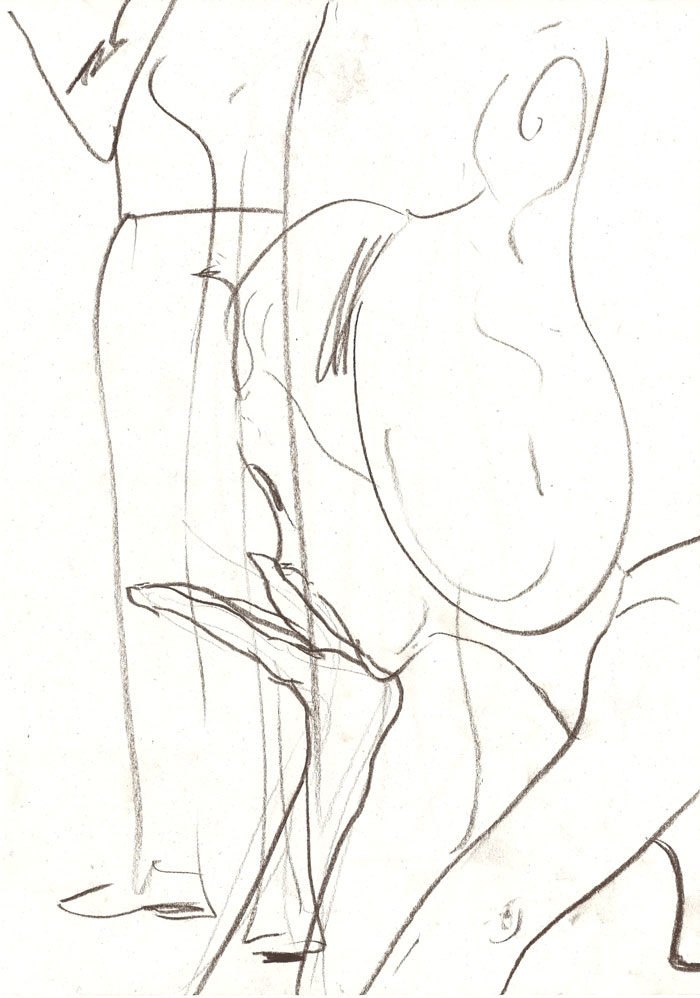 Conversation with the Tsatsawassa House by Bernadette Mayer (2016)
Bernadette: O sweet delightful house why do so many things get lost in you?
House: Maybe you just dream you lose them.
B: How do you know what dreams are?
H: I pride myself on knowing everything you know.
B: Oh, so you know we’re getting you new windows?
H: I have trouble with no & know. With knew & new too. Why do people do that?
B: I don’t know; I don’t mean I don’t no.
H: See, you make it hard for a house. Anyway I don’t usually speak.
B: Do you write poetry?
H: I dabble. I don’t know if it’s poetry or prose though.
B: It’s prose—it’s shaped like you.
H: What about my roof?
B: That would be a concrete poem.
H: Even the time the tree fell through it?
B: That would be a different genre, perhaps conceptual art.
H: I’d like to climb mountains. You can leave me whenever you want but I’m stuck with you.
B: What was it like when people prayed in you?
H: It was kind of creepy. I liked the Jewish people better — more love of life. People can do anything they want to me, I’d like to be more proactive. I’m just stuck here. Even a cult could move in.
B: I’ve never been a therapist for a house. How was your childhood? Were you born?
H: I was made of mostly local stuff. Don’t set me on fire. I tremble every time you light that wood stove.
B: There was no heat when we moved into you; there were also 24 doors.
H: Don’t blame me, I didn’t do it.
B: You didn’t do anything but be here like an immobile tree, but you provided shelter. Can houses tremble? Do you have a sex life?
H: None of your business. The sex life of houses isn’t known to humans, nor will it ever be.
B: You seem to have mastered grammar but not homonyms.
H: I liked it when I was unoccupied, full of birds’ nests on the porch & ghosts inside, I felt fulfilled.
B: How did you like the Hebrew books?
H: They reminded me of my bat mitzvah.
B: You never told me you were Jewish.
H: I thought you’d never ask. 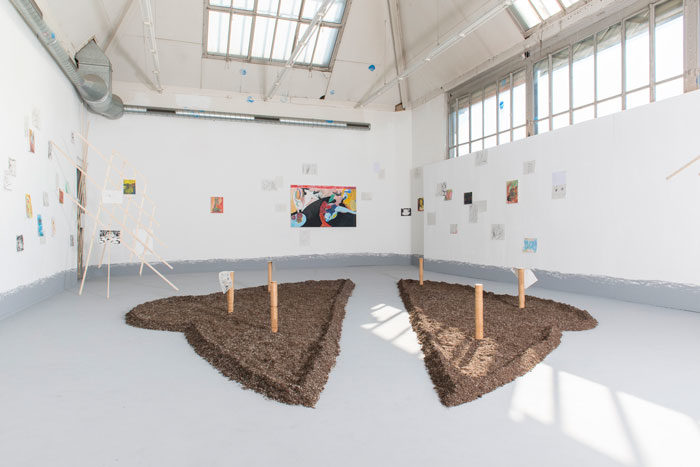 November, 11th
Conversation between the curator and the artist at the Studio
J: I’d feel better if I was alone after all.
E: You perform alone. I see. What’s going on
D: A “Visite de Digestion”
E: Without hosts?
J: Yes… only visitors, all of us are foreigners.

Jessy Razafimandimby is a painter and performer. His work lies at the intersection of the two mediums, whereby his body "enacts" movements based on his visual and formal work, and his paintings "trap" and fix motions on paper and canvas. He's nominated for the Société Générale's Swiss Emerging Artist Prize 2019.
DiaryhomePoetryProcess
The Poetry in the Cracks of Language

Exhibition / Performance
What comes before the work? What do the artist and the curator say?