Matilde Cerruti Quara, In the Spirit is the Word, 2020. Photo: Studio Abbruzzese.

Being With, In Spirit

Curated by Lisa Andreani and Sonia D’Alto, In the spirit of being with is a soft deviation from the present time, a decoy where the future acts backwards and the past can’t keep still in its grave. Linear narration melts into the material production process, something weird, almost carnival-like confirms the idea of progress as a mirage. A metaphysics of existence essentially composed of co-existence and symbiosis substitutes the determinist and technological dogma. It is the principle of metamorphosis, of change and magical fusion, where there are no borders, no boundaries. Empathy becomes the human weapon to enter into communion with the world, vital and political power. Fusion and syncretism create a wonderful routine where memory and fantasy can be practiced anew, together with fairy tales and refrain, modesty and audacity. Anguish for the end and its post-apocalyptic tales are remodeled in the exhibition through a new cosmology, creating a new semantics; an archeological and medieval aesthetic, a contemporary and prehistoric art, calling in aid the poetic word and filmic narration.

The reality crisis in which we are living is a crisis of the world, Anthropocene—the signs of danger that warn us against imminent loss. The exhibition gives an existential alternative. A new doctrine is laid out unbeknown to its protagonists that, abandoning any pretense of coherence, are reunited in the attempt to create a much more complex geometry. Aesthetic insomnia transgresses the logic that is now managing the world, attempting to evaluate what is not immediately present and what we cannot govern by taking into consideration a reincarnation of folly and of poetic writing, as a moment of passage towards a metaphysics and a mitophysics of existence. These last two circumstances are expanded in a collaboration with Il Piccolo Cinema, a project by brothers Gianluca and Massimiliano De Serio, with a screening of the movie Andrò come un cavallo pazzo (1973) by Fernando Arrabal and through a selection of editions, publications and self-published works that trace the value of poetry in contemporary artistic and curatorial practices. 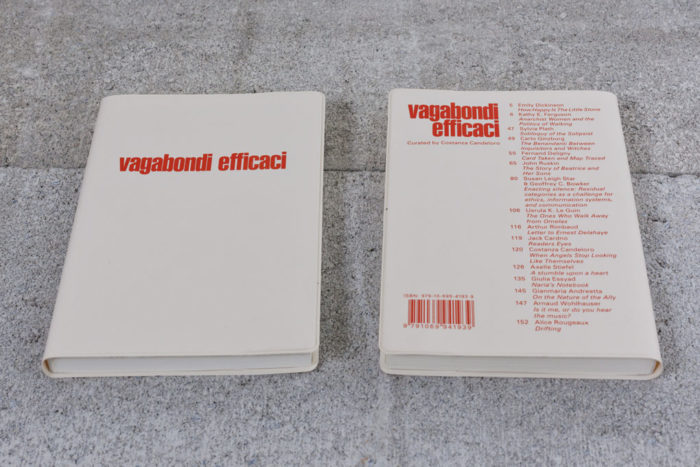 For a Complete Service: Here’s the Invoice

I was thinking of Deleuze-Guattari’s concept of schizophrenia, where delirium, associated with a continuous coding and decoding, is put side by side with the concept of capitalism.

Anecdote: Zelda Fitzgerald’s biography includes a nervous collapse at the movies. They say that the cause of her trauma was the close up of an octopus, so realistic that it made her run from the theater. In Jean Painlevé’s movie the cinematographic tecnique revived the octopus, giving it a new format. I don’t believe Zelda was surprised by this shift, I actually think that she understood the situation to the point of being brought to life herself, abandoning the passivity of her chair to leave the theater. Zelda was revived together with the octopus. 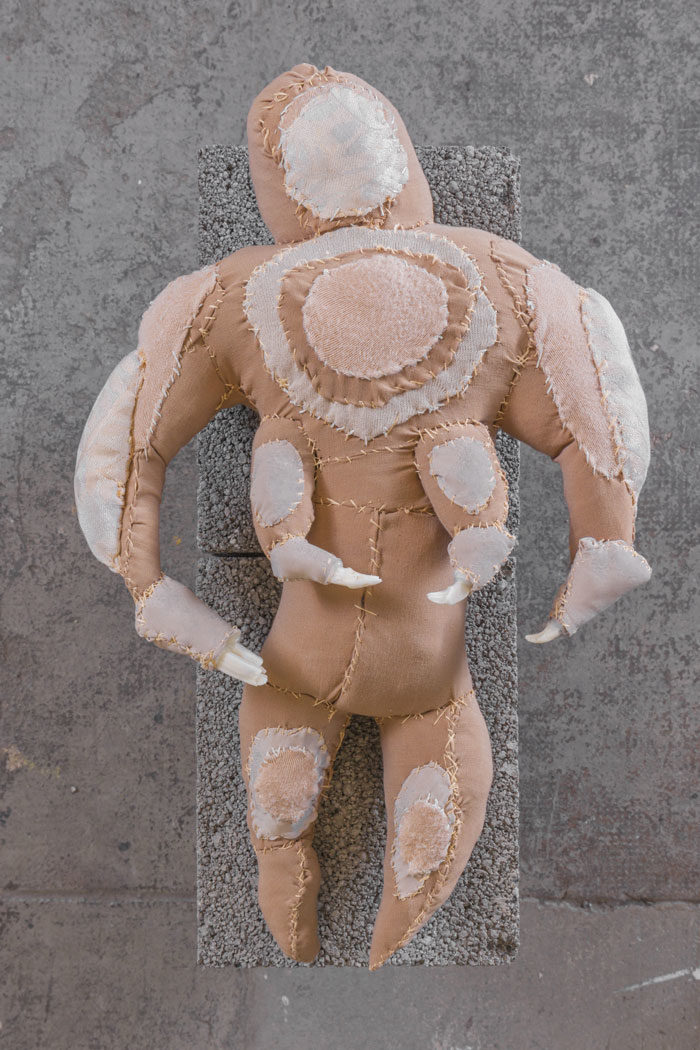 In 2012 Anselm Franke opened  at Haus der Kulturen der Welt  Animism. The term analyzes a world of entities that move and evolve together, whether they are full or devoid of life. The definition acquires a founding value, so much so that it has been extended to technological models. Digital progress takes us back to our primitive past, to the need of finding a soul in everything. Magic begins to fill the air while we are all part of a great popular legend whose characters are talking utensils.

Some theorists have stated that this technological mystification was ordered by a problem of indecipherability and intimidation. Others asserted that it was only a matter of generational change.

Opinion: it is probable that both dimensions are real. (In the meantime, before a change of parameters got popular, critics and curators promoted the magical abandonment generated by connectivity, catalyzing attention on an intelligent and sensitive art-device) 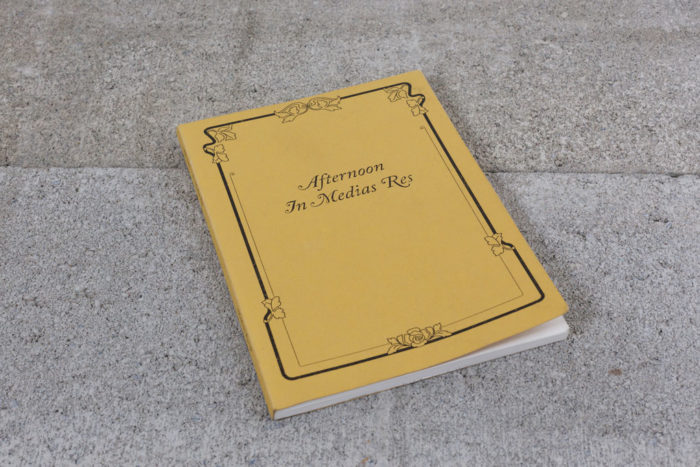 Madison Bycroft, In Media Res, made on the occasion of the exhibition Desk Set at CAC Brétigny, France, in collaboration with Publication Studio Rotterdam. Photo: Studio Abbruzzese. 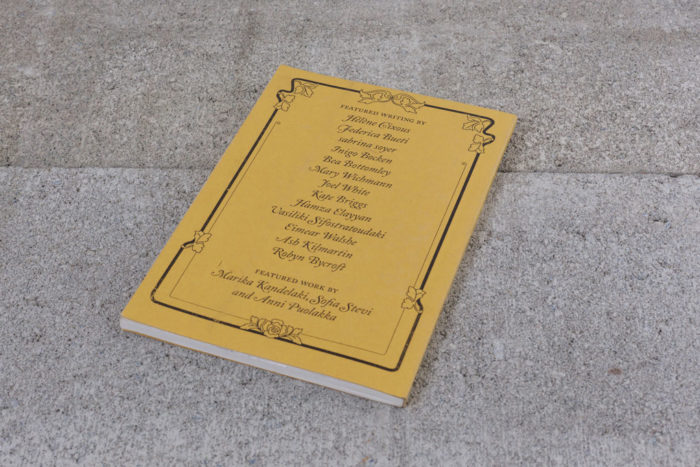 Madison Bycroft, In Media Res, made on the occasion of the exhibition Desk Set at CAC Brétigny, France, in collaboration with Publication Studio Rotterdam. Photo: Studio Abbruzzese.

To better introduce the change of direction described above it’s worth it to immediately mention Wittgenstein.

Quote: “What it is that is deep about magic would be kept”

Thus, abandoning the magical-technological, we go back to the traces of a local, archaic, magic, made of residua of legends and myths. The produced images become religious, esoteric and  supernatural symbols, so powerful that they don’t need the support of any opinion to be justified. Magic becomes indeed the representation of a desire, and it expresses it for what it is.

Opinion: No explanation then, because it would only be an hypothesis and, at the same time, a synopsis tightly connected to an historical point of view, very often tied to progress, of a selection that would thus mediate understanding. By substituting a cognitive scientific process with a process based on imagination, the most relevant consequence is the attempt to expand our society’s self-conscience. 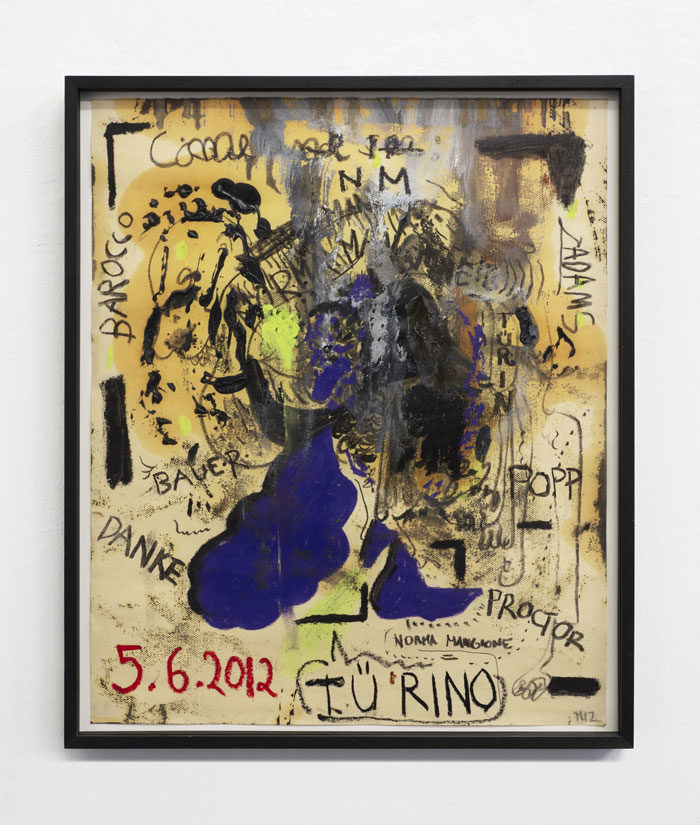 Quote: “If the eye was not sun-like, the sunlight it would not been see” wrote Goethe.

As we are able to be both oneself and something else (a totem, a spirit, a pixie, a witch) we produce a gesture of dissimulation. Present and simultaneously taken away from the same world in which we put down our feet from the bed every morning, we are capable of establishing a self-sufficient otherness. In a daydream, fabulatory hope courageously exposes itself to uncertainty and disappointment. But we need to give attention to any possibility of fascination.

Anecdote: The fundamental theme of midest ceremonial magic from Lucania is fascination, in dialect fascinatura or affascino. This term indicates a psychological condition of impediment and inhibition and, at the same time, a sense of domination being acted by a force that is as powerful as it is occult, that leaves no edge to the autonomy of a person, their ability to make decisions and choices. Fascination entails a fascinating agent and a victim; when the agent has taken a human form, fascination becomes a curse, a malignant influence proceeding from the envious gaze. 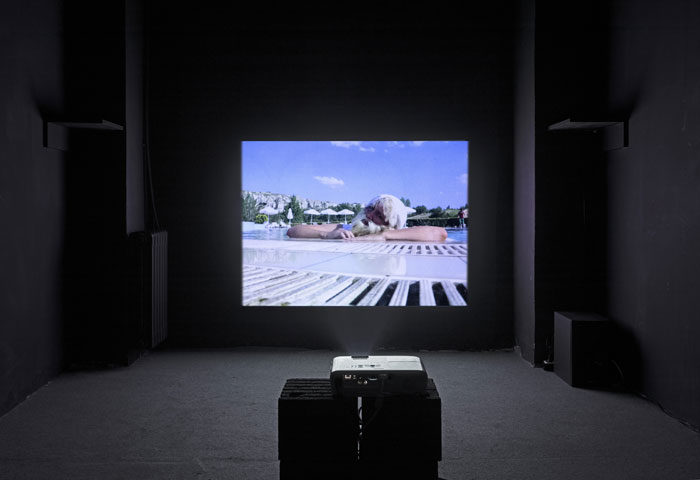 Searching for an aesthetic independence, today we begin asking something more to literature, something that could overcome the knowledge of those times and the mymesis of objects or feelings. We want a cosmic image from literature. Politics and technology undertake an attempt at turning this “false magic world” to zero, artists simultaneously place themselves in a sudden narration.

Thus art is really a magical territory, since the tearing and the exchanges of energy between images are never violent, but happen simply through evocations and mentions. Some of these artists told themselves their dreams or described their imaginary objects.

Magicality becomes the behaviour that consists in the enlargement of the fantastic zone of their community. Thoughts, words, what they mutually hear, acquire the same value of materials. The value of poetic content allows us to move acrobatically from different positions within the mobility of a world we cannot fully grasp.

Magicality isn’t the real transfiguration of phantoms, but the ability to see through horizontal and multi-sensorial lines. Here the circumstance is the immediate and decentered existence of the world. The magical territory is a mobile zone, attached to its existence. Here everything is possible because the regulatory principle is time, accompanying and touching with its evolution the composition and decomposition processes of things. The artist’s fantasy creates continuous contractions in immediacy, an illuminating suspension preserving the temporal flux. Like the sparkling surface of a striking Allan Poe mystery.—Lisa Andreani 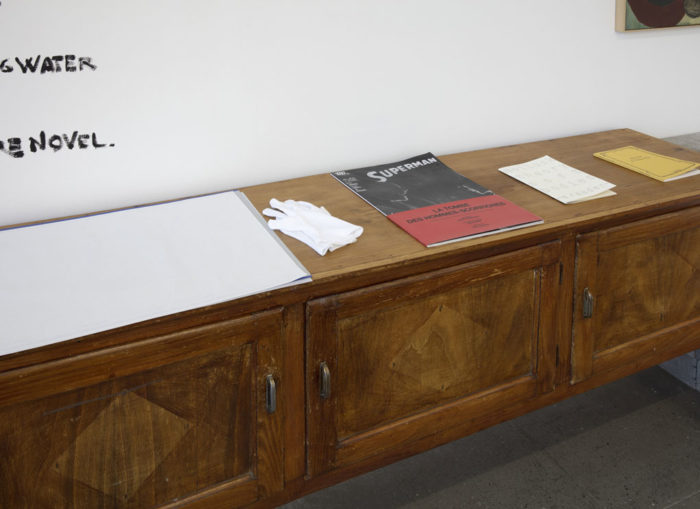 In the spirit of being with, curated by Lisa Andreani and Sonia D’Alto, 2020, installation view, Cripta747, Turin. Photo: Studio Abbruzzese. 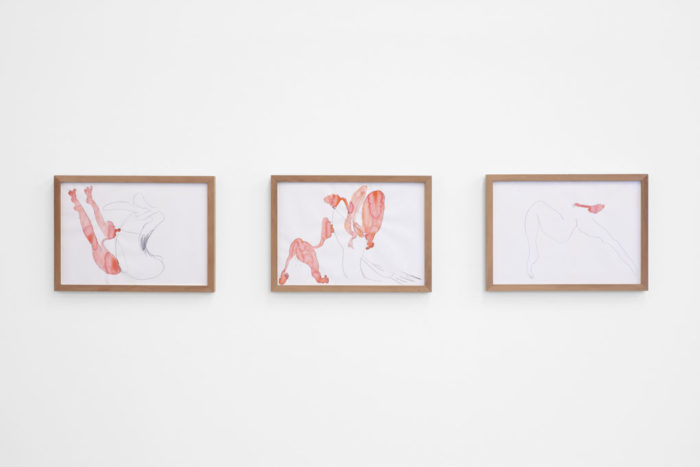 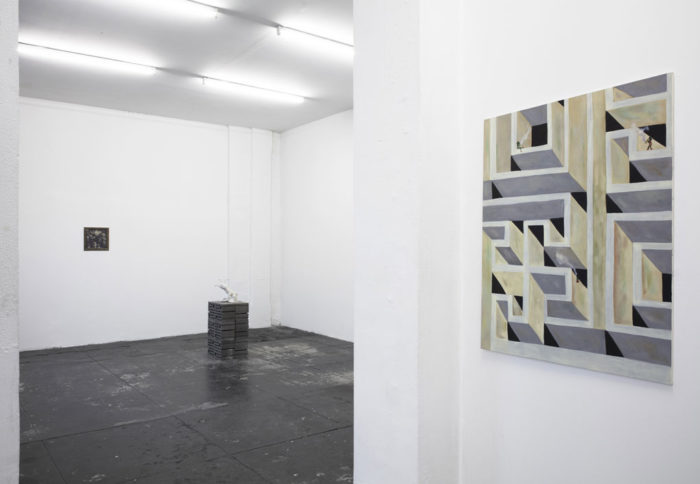 In the spirit of being with, curated by Lisa Andreani and Sonia D’Alto, 2020, installation view, Cripta747, Turin. Photo: Studio Abbruzzese.

“Go then to the other world, and since you must love, love those who dwell there.”

This slight deviation from an idea of time and space of technological society, announces itself with effects of wonderful confusion. Everything is clear and transparent from a horse’s point of view, if we consider that animals are “good at thinking with”. And our philosophical superstition also believes that a horse, stubborn in its empathy, encountered a philosopher and master of prophecy who understood the blind decadence of a certain civilization. It happened in Turin. The survival of things required a spasm of folly and a calm dose of poetry. According to the tradition of dissident bodies, reluctant to the evil of power, a subordinate and marginal history is possible. No secular legitimization or personal glorification is admitted. Cosmic visions with second thoughts on time and space, on the other hand, are allowed. The exhibition In the Spirit of Being With is exactly that, a second thought on the sacred sense of existence. This makes multispecies narrations necessary, as they defend themselves from the existential and anthropic precipice. We need to get out of spaces and invade time. We need to be overwhelmed by poetry and undo our self. Emancipation through alignment with the cosmos, its requests of survival and its labyrinthine future. Confusion exists only from a human point of view, a human desecrated of justice. On the contrary those whose spirit is simple, the animals, blindly own a magic realism, a spiritual poetic, that needs to be taken into consideration as metaphysics and mitophysics.

“To practice dispossession in collaboration is a form of poetry”

Empathy and dispossession are vital weapons of action, just as the stories we will begin to tell to each other again. In the Spirit of Being With is the proposal for a narrative plot remodeling space/time categories by dissimulation and concealment, a narration through fragments that invites into the ineffable.—Sonia D’Alto 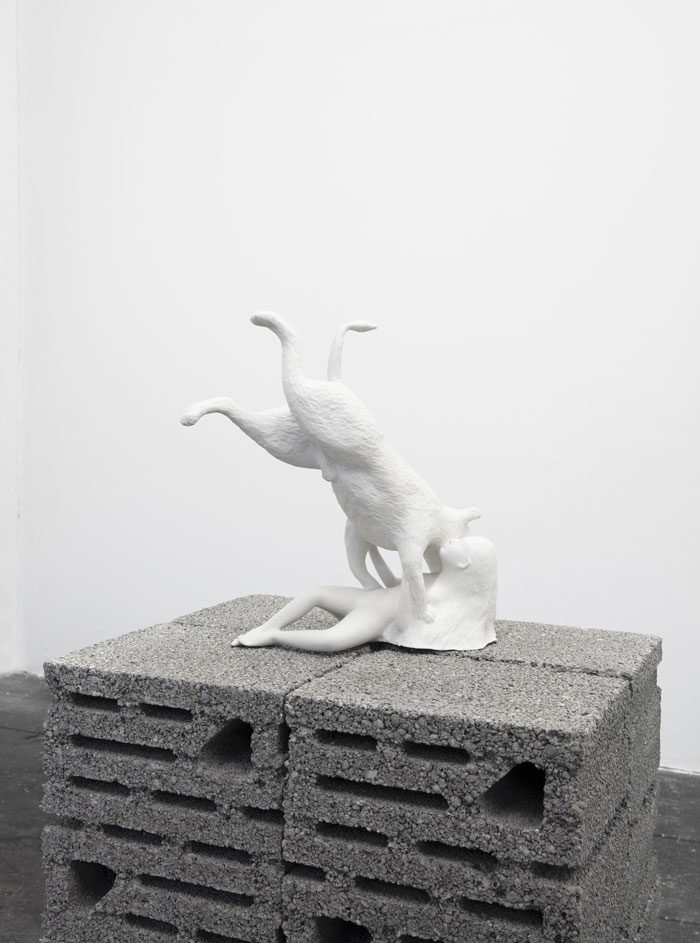 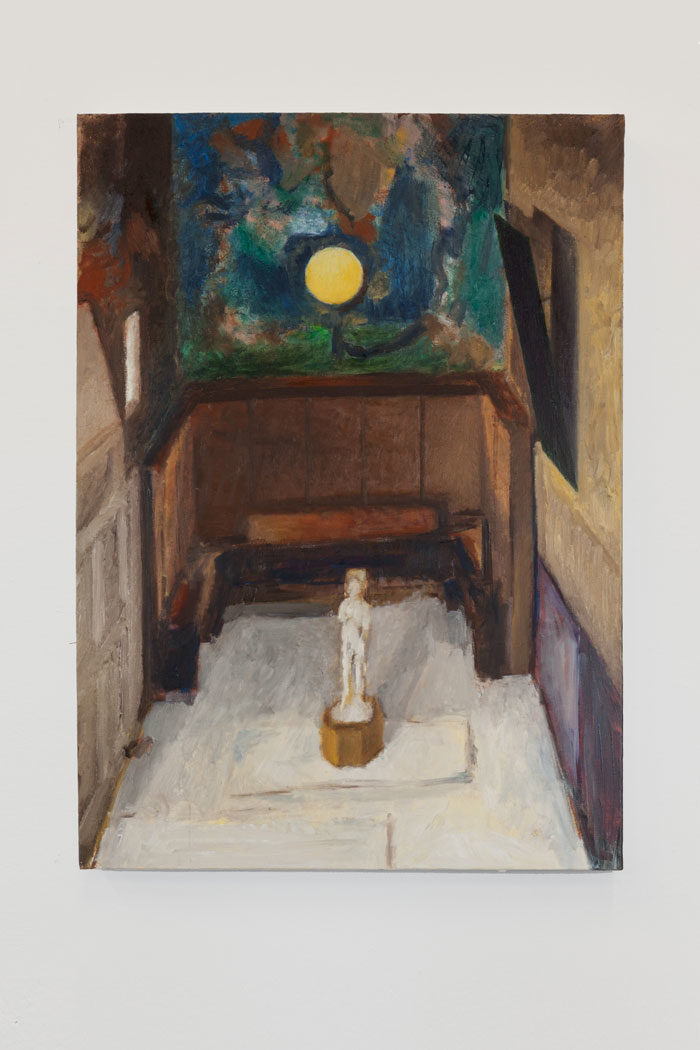 Sonia D’Alto is a writer, curator and researcher. She is currently a PhD candidate at HFBK in Hamburg. She is part of ৺ ෴ ර ∇ ❃ ꩜ ﹌﹌ a research group working on the intersection of feminism and the Southern question. As a curator she has worked and collaborated with independent spaces and institutions including the Venice Biennale, Museo Madre in Naples, Fondazione Pini in Milan and documenta studies in Kassel. Her curatorial practice is based on spiritual strategies and speculative methodologies, experimenting with political imagination of the future.
Lisa Andreani is a Milan based writer and curator. Her research focuses on the idea of circular engagement among architecture, design and contemporary art as performative and transversal education.
Contemporary ArtEmpathyPoetry
Chez Soi

Exhibition / Interview
A conversation on ecology and feminist practices, fictions and future predictions