The Land of Cockaigne

The exhibition Il Paese della Cuccagna brings together objects and stories from across Basilicata which attest to the lifeforce of legends, fictions, and non-humans, and their entanglement with our own lives. From musical instruments constructed from trees and skins, to the green screens of movie sets, promising other realities; from the number-crunching machines of space science to the songs of harvest and husbandry: all these are here, waiting for our wonder and our care. Navine G. Khan-Dossos and James Bridle are artists, partners, and guests of I-DEA and Matera City of Culture 2019. Their work deals with the relationships between humans, non-humans, culture, technology, and representation; and the role of art in reimagining better futures.

In medieval literature, Il Paese della Cuccagna—the Land of Cockaigne is a mythical place of plenty, an alternative reality in which the harshness of everyday life is replaced with superabundance. Stone bears fruit, wine bursts from the spring, and birds and animals leap up in song.

But where is Cockaigne today? Unlike political utopias or religious heavens, we believe that Cockaigne is not some faraway place, remote and hard to reach. Rather, Cockaigne is close at hand, at right angles to our everyday reality, immediately accessible to those with eyes to see and ears to hear. It is still a place of surfeit and abundance; it is also a place of struggle and uncertainty, of spectral beings and other intelligences. 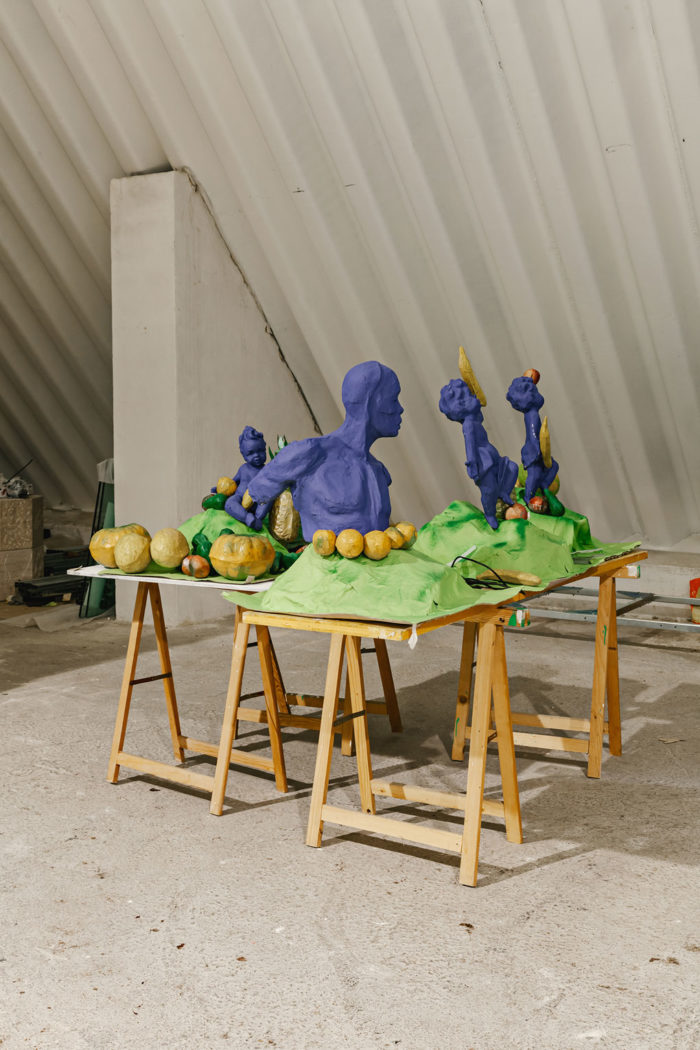 Cockaigne is glimpsed among the trees in spring and shouted in the drunken revels of the festa. It is heard in the song of shepherds and in every breath that blows through the zampogna and every sigh in dusty libraries. It is there in the hoisting of the maggio and the cirii as well as the tourist knick-knacks and the Hollywood movie sets. Cockaigne is in the shuddering of superstition and the ragged jubilation of protest. Cockaigne exists unevenly distributed in space and time, connecting ancient and modern artefacts, practices and knowledges, constantly being created, recreated, uncovered and buried again.

In medieval literature, the land of Cockaigne is a mythical place of plenty, an alternative reality in which the harshness of peasant life is replaced with superabundance. Bread grows on trees, the vines are hung with sausages, and wine rains from the sky. It is also the land of Carnival, the world-turned-upside-down, where class and gender boundaries are broken down; where the nuns whip the abbot, the landlord swabs the stables, and the fool is king for a day. 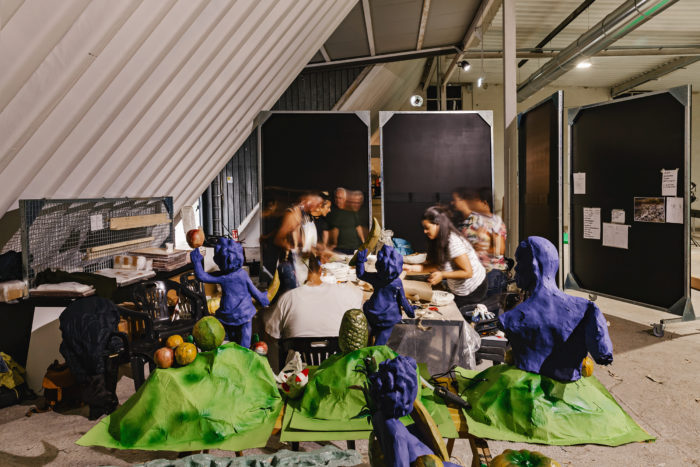 In Italy, the land of Cockaigne is known as Il Paese della Cuccagna, and is echoed to this day in the traditions of the Marriage of the Trees (Il Maggio e la Cima), the greased cuccagna pole topped with delicacies, and the tree of life that grows from the Cucu’s back in Matera.

While medieval writers placed Cockaigne in the middle of the ocean, or many months march away, for the curators, Navine G. Khan Dossos e James Bridle, the land of Cockaigne represents not a elusive elsewhere, but an alternate reality: one which is already close at hand. This utopia is always present, at an oblique angle, to the everyday. It is glimpsed in the depths of caves; it shimmers in the drunken revels of the festa; it glitters in laser reflections from the moon; it bursts from hedgerows and beech forests in spring. It is there in the hoisting of the Maggio and the Madonna del Carmine as well as tourist knick-knacks and Hollywood movie sets. Cockaigne exists unevenly distributed in space and time, connecting ancient and modern artefacts, practices and knowledges, constantly being constantly created, recreated, uncovered and buried again. 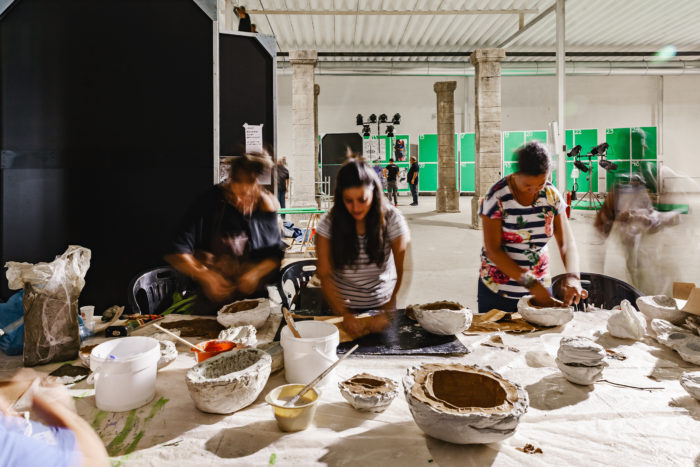 These diverse knowledges and practices, from archiving to foraging, archaeology to ethnomusicology, transform the barren into the plentiful. They reveal the bounty of everyday life, forever at hand if you have the tools and eyes to see it with.

The land of Cockaigne is drawn upon both the official and unofficial archives of Basilicata; the ancient, the living, and the yet-to-be. Animated by the spirit of Cockaigne, the curators brought together antique plants and contemporary foragers, pre-war documentaries and modern blockbusters, bagpipes and satellites, science and ritual, with the intention to show the multiple ways in which the richness of the present breathes new life into the past. 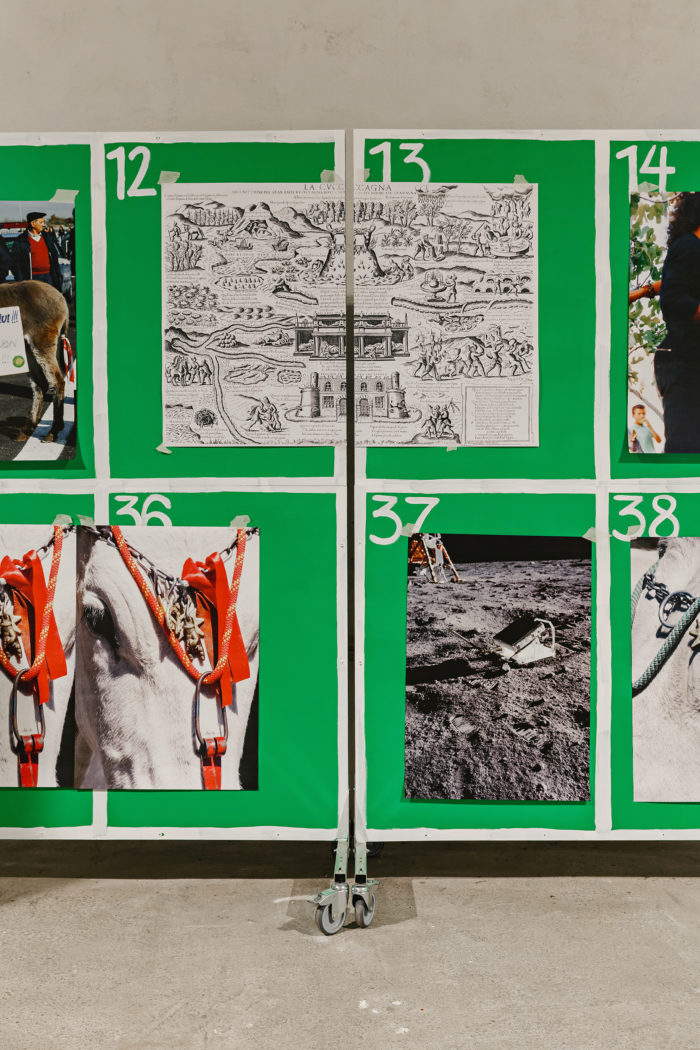 Navine G. Khan-Dossos is an artist who works between London and Athens. Her interests intertwine Orientalism and the digital, geometry as information but also as decoration and aniconism in contemporary culture. James Bridle is a writer and an artist who works among new technologies and multiple disciplines across them. “New Dark Age”, his book on technology, knowledge, and the end of the future was published by Verso in 2018 and was released in Italian by NERO in 2019.