OItreOreto is an art festival taking place in the suburbs of Palermo, investigating what a boundary is, where it originates, and what art can do to cross it

OltreOreto (Beyond the Oreto River) is an art festival, a set of exhibitions for urban regeneration, aiming at questioning the existence of a communicative bridge and, if necessary, at creating one with the suburbs of Palermo, which are impregnated with folk morals, and yet victims of marginalization. The festival follows a fixed route beyond the Oreto river, in places where contradictions are strong, balance is precarious and boundaries are apparently insurmountable. These rooted local dynamics pushed the artists to investigate what a boundary is, where it originates, and how to cross it through art. The works part of the festival OltreOreto, are the result of a strong will to fill the gap between the two parts of the city divided by the river, with respect and care for the territory.

The installation made by Giuseppe Borgia, DEI CANI (About/Some/Of Dogs or even Dogs meant as divinities), is right at the mouth of the Oreto. According to Borgia, the dog is a symbol with a double meaning: on the one hand, in Egyptian culture the dog was the symbol of protection, the guardian of the line between the forces of good and evil; on the other, the memories of past times in Palermo remind us of all the stray dogs in the city streets. DEI CANI is an installation that fuses with the background and becomes a talisman protecting time and space, protecting Palermo, its history and its threshold. 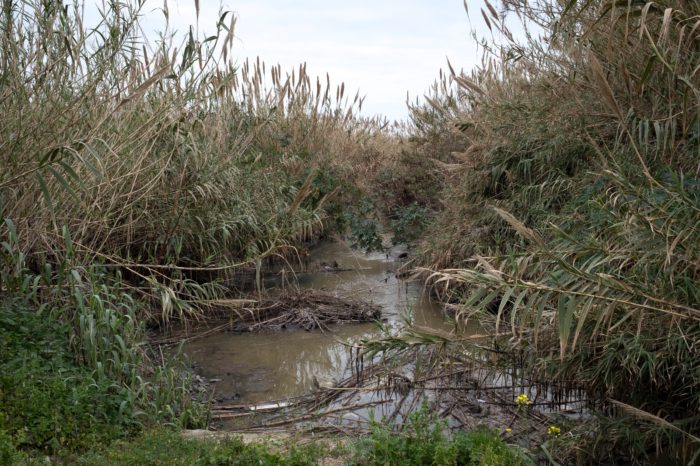 Another work investigating the concept of threshold is the permanent installation made by Adriano La Licata, called Soglia Bandita (Outlaw Threshold, where Bandita stands not only for outlaw but also as a reference to an area of Palermo, nearby the installation). His work has a sort of chemical nature, and its allegories create a balance that is not only logical but also formal. The setting of Soglia Bandita is a showcase inside the Laboratorio Arti e Mestieri Tomasino, where ice pedestals, undergoing a slow metamorphosis, carry lead and zamak sculptures consisting in beach objects, with a new gravity, picked by the artist along the Southern shore of Palermo. Above the scene, a photograph showing the landscape and the artist, merging into it.

Among the works of the festival, the result of the painting workshop by Gianluca Concialdi is on display in the association Gruppo Amici Tempo Libero, where the workshop took place. OltreVita (AfterLife) is a strongly emotional and social work, in which Concialdi decided to abandon the paradigmatic image of the artist and take a step back, allowing the elderly he worked with to become active protagonists of this experience. These old people analyzed the antipodal concepts of life and afterlife through primordial and gestural painting and through the use of words, triggering a cathartic mechanism and an apotropaic ritual imbued with truth, intimacy and sacredness. 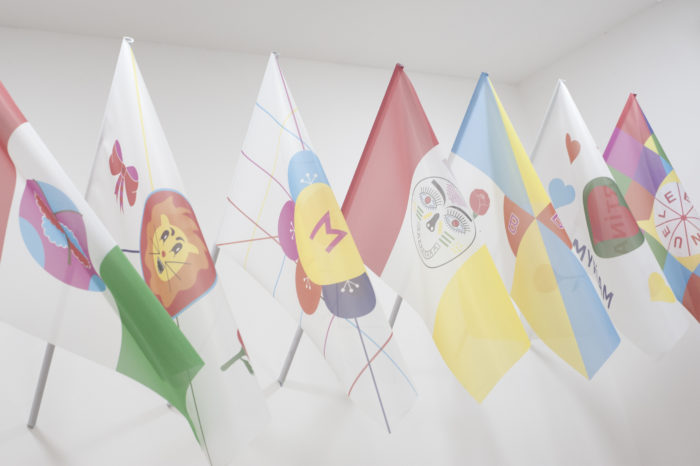 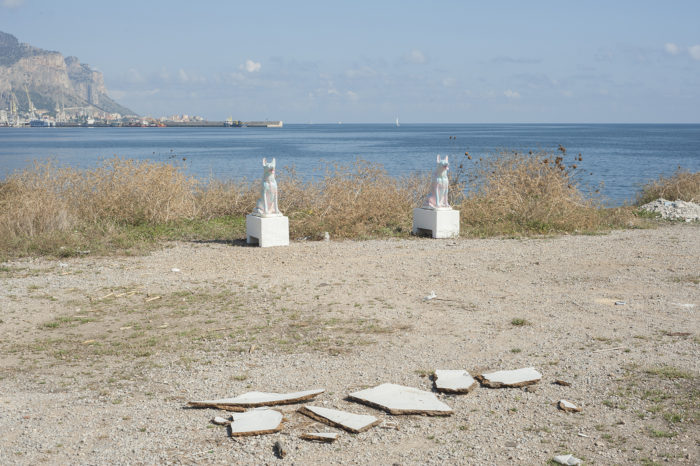 False Flags by Francesco Cutway focused on the idea of identity: false flags represent the individual, not the community, and then go back to unity while installing the exhibition. The artist worked with thirteen children coming from areas of Palermo beyond the Oreto river, who explained their perception of identity and created the flags. They followed the guidelines of a single layout chosen by Cutway, who eventually readjusted their drawings in order to emphasize the concept of identity camouflage.

The collective Il Pavone worked with a group of young people on the audio-visual installation DEEP SELFIE, the result of the street workshop about technical and artistic training and new practices of video installations. Now displayed at the former repair shop in Corso dei Mille, DEEP SELFIE uses the newest media dynamics in an experiential path, where the audience becomes part of the whole system, underlining the relationship between technology and our behavioural legacy.

La Danza dei Giganti (The Dance of the Giants) is a work by the Genuardi-Ruta duo. The site specific work begins as a combination of architecture and painting in the Magazzino Brancaccio, one of the numerous assets in Palermo seized from the Mafia, appearing as a graphic translation of impressions given by light and structure. The space is transversally crossed by a twenty meters canvas from which a black geometry extends, absorbing and sending back the light that filters through the structure and alters it. The resulting ambience is intensely immersive and is completed by sound. 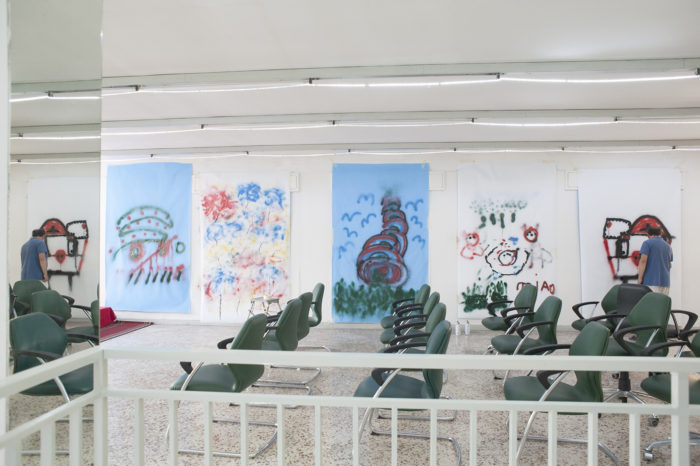 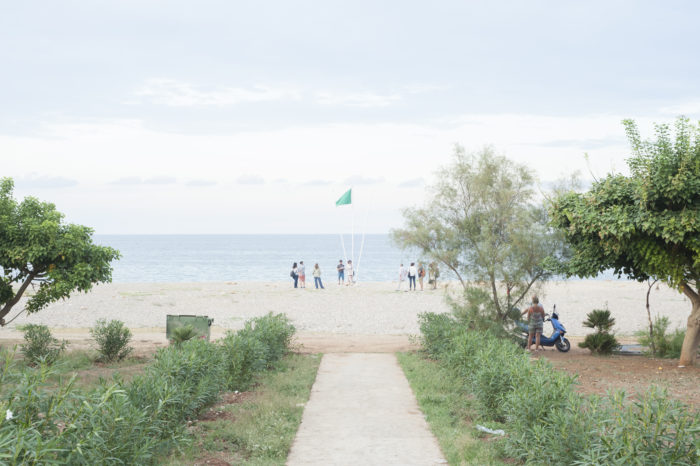 Tothi Folisi presents Ask the boy, a ceremony of hoisting the flag in the Romagnolo beach, in via Messina Marine. A 15’ audio integrates the installation and summarizes the conflicts between the Sicilian territory—especially Palermo—and the concept of migration, with the Arab rule in Sicily as a focal point.

Sound is protagonist as well for the musician and sound artist Alessandro Librio, in his Birdsquartet, a performative and audio-visual work designed for the church of Santa Maria dello Spasimo by its curator, Giusi Diana. Birdsquartet is the result of research, that Librio started years ago, about the potential interaction between sound and nature. The focus of attention is the exploration of the Southern shore of Palermo and its boundaries, the division between Palermo and its suburbs created by the Oreto river, and the fine line between earth and sky. For the exhibition, the flying quartet created a graphic score without using the bow, as usual, but harnessing wind speed and pressure, just by making the instruments strings vibrate.

The festival reaches its conclusion on Sunday, September 23rd, with a musical event at the church of Santa Maria dello Spasimo, from 5pm to midnight, with a performance by the Bangover Crew. Alongside, a photographic exhibition by Francesco Bellina, Marco Chiarenza and Umberto Santoro, explores topics such as the seaside and the Southern shore. All the artists taking part in the festival  contribute and present other videos and installations; with the participation of the Bangover Crew, the photographers, and artists Giuseppe Borgia, Gianluca Concialdi, Francesco Cutway, Tothi Folisi, Adriano La Licata, Alessandro Librio, Il Pavone, and Genuardi Ruta. 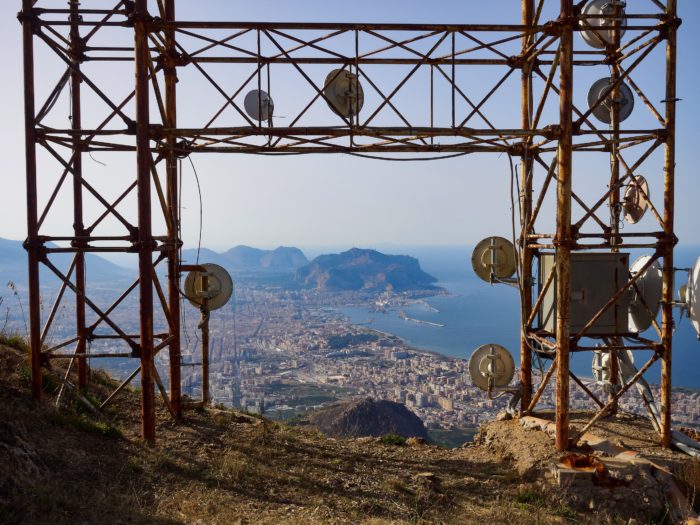