Structures and Institutions suggests a future where international cooperation is possible and will succeed in creating new institutional frameworks and through them build structures on earth and in space. New institutions could emerge from the UN gaining more executive power to counteract aggressive inward-looking national interests, seeking and fostering economic and cultural exchanges on a global level. One can imagine a next level global cooperation of space agencies joined by private space corporations. There could be global institutions that combine knowledge gained in the arts and science. With this in mind, even a temporary setback such as Brexit could, in the long run, foster new international types of cooperation. The global market environment pushes everyone everywhere to seek alliances and partnerships. These trans-border connections will increase rather than decrease, despite a current resurgence of wall-building efforts. Humans are simply too curious; they travel, explore and make connections in other places. Endeavours such as space tourism may start as luxury or military efforts, but they could become more widely accessible to the public further down the line. If space tourism were to become current in one place, it would be adopted with the competitive force of city tourism. A phenomenon like ISIS can grab the attention of young radicalized men for a moment, but it is nothing compared to the force that shapes the scientific, medical, sanitary, economic global improvements of the past 50 years. 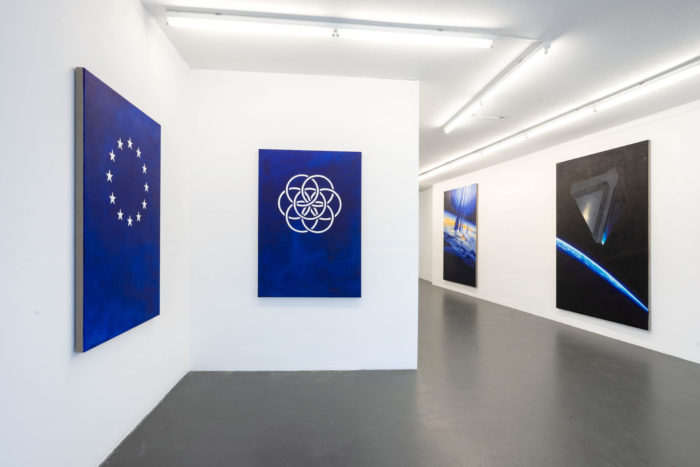 To witness in these paintings, Earth’s atmospheric glow from afar is not meant to suggest escaping or abandoning Earth, but to propose a vision of Earth possessing a round shape itself, radiating its presence as our very own living institution.

The logos in the exhibition feature the United Nations, the European Union, an earth flag design by Oskar Pernefeldt; and Star Trek ‘s United Federation of Planets. The UN and EU logos are real, whereas the other two are speculative. Star Trek’s Federation is an optimistic UN future version, embracing transplanetary cooperation in a gradually unifying universe. The Federation is also heavily militarized and many conflicts within episodes take place at the edge of the Federation’s reach. 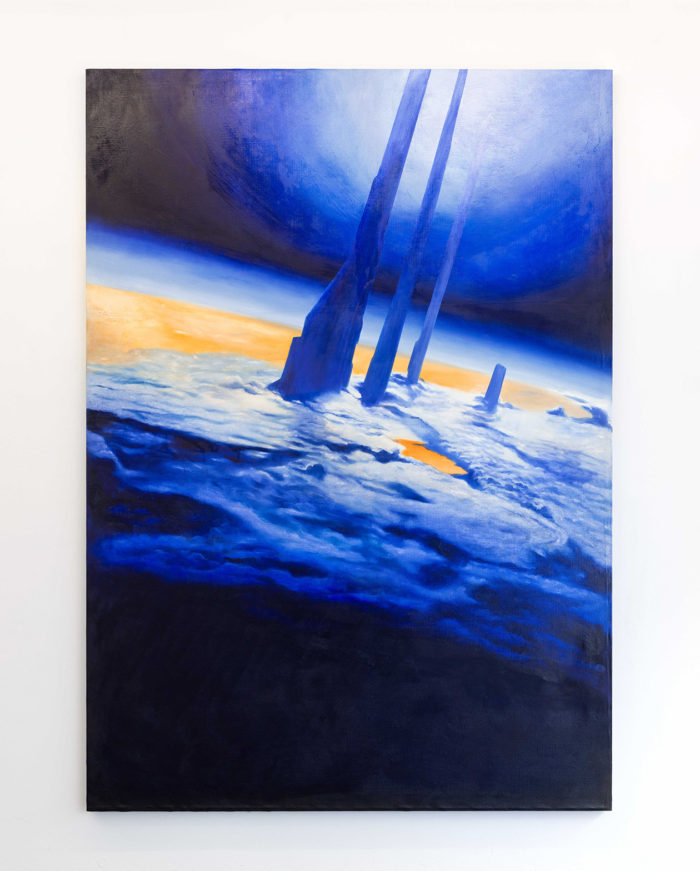 The combination of these shapes in space and these institutional logos highlight the interrelations between the two in terms of structure. The space station is a large scale, built structure; the structure of the United Nations evokes intrinsic webs of organizational layering. An undertaking such as the UN is a multilateral effort combining many minds, states, non- and intergovernmental institutions. Behind the physical shape of every engineered object in the sky—whether it be human or alien made, lies an institutional framework with a complex history of early initiatives, propositions or orders; manifold engineering and design stages. After a long process, the station or spaceship emerges like a mysterious marvel, spinning gracefully in the silent vastness of space.

The two mid scale paintings of spaceships are the Endurance from Interstellar and Space Station V from 2001: A Space Odyssey. Megastructure (After Paul Chadeisson) and the hovering objects in the other large paintings transmit, beyond their impact laden appearance as visually effective shape imbued with institutional purpose. The range of intent is wide, from the totalitarian Tet in Oblivion to the more positive Heptapods of Arrival and their elongated oval shaped spaceship hovering over Hakodate City in Hokkaido, Japan. In Neil Stevenson’s Seveneves humans had to invent ways to inhabit the orbit due to Earth becoming uninhabitable. The remaining humanity travels between cities in space on a wheel-like structure called The Eye—evoking a sophisticated 3D version of Pernefeldt’s earth flag. 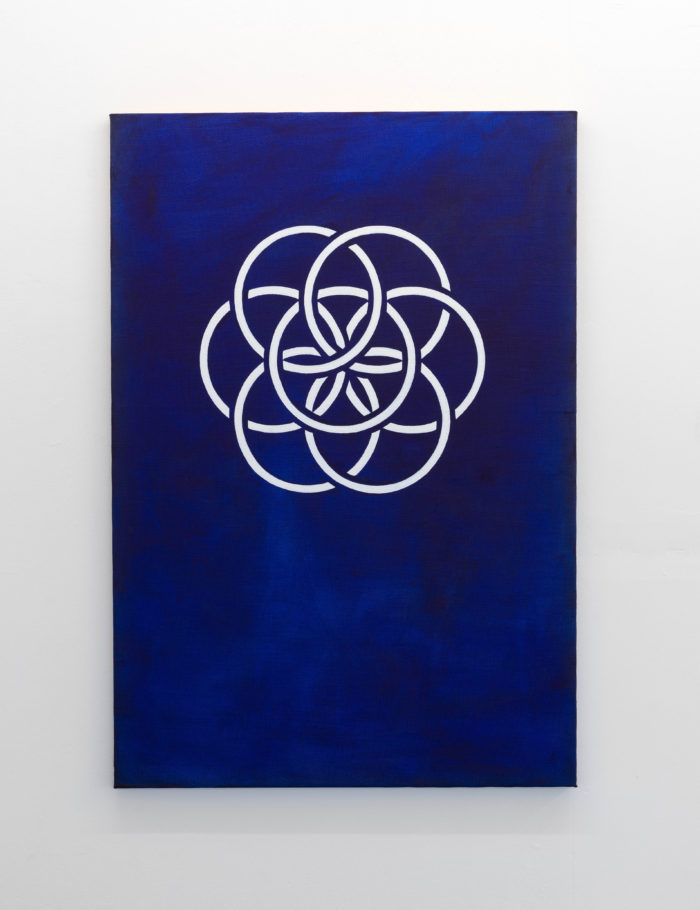 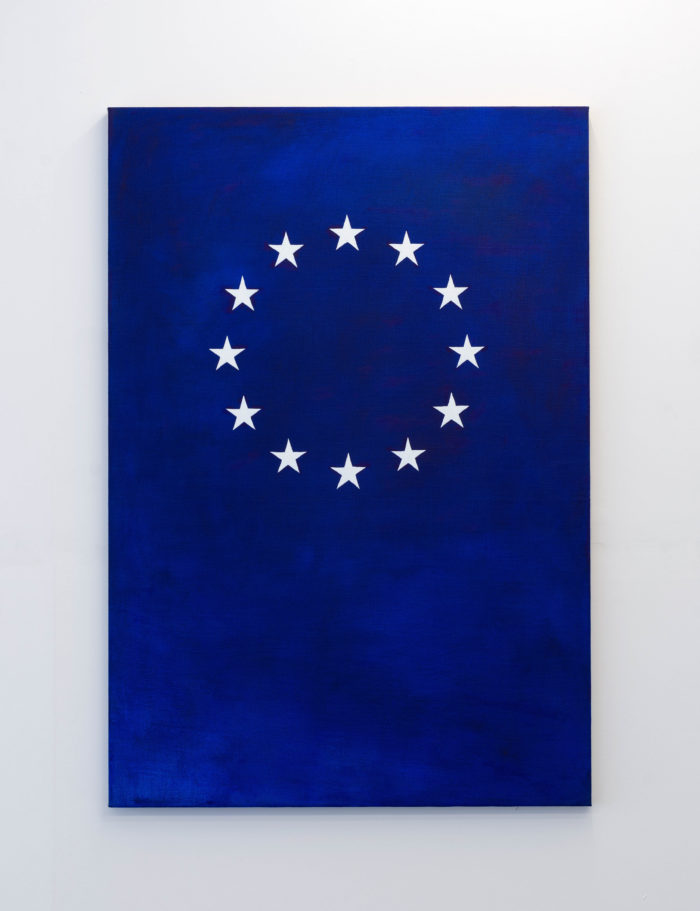 Today, we take the United Nations for granted—somehow assuming it was always there, yet it only exists since 1945, a mere 73 years. For a science fiction writer like H.G. Wells (publishing The Time Machine in 1895), a global institution like the UN must have been a powerful thought within a distant dream. In the 1940, Wells wrote and published the prophetic Declaration of the Rights of Man, which was followed closely in the eventual wording for the 1948 UN Declaration of Human Rights. This is one example how new ways of thinking can translate into new declarations and new institutional designs. Real and fictional realms, potentialities and shapes vibrate conjointly, engaging each other constantly independent of space and time.

The International Space Station (ISS) is the only real structure matching fictional space stations. Many nations contributed to its construction and continue to support it. While relationships between states may go sour, the ISS continues its trajectory at 7.66 km per second, orbiting earth every 92 minutes. Its movements and purpose transcends national confines. What institutions and resulting structures will we build in the future? Humans may one day build large objects in the sky. The funding needed to build such structures demands transnational cooperation. 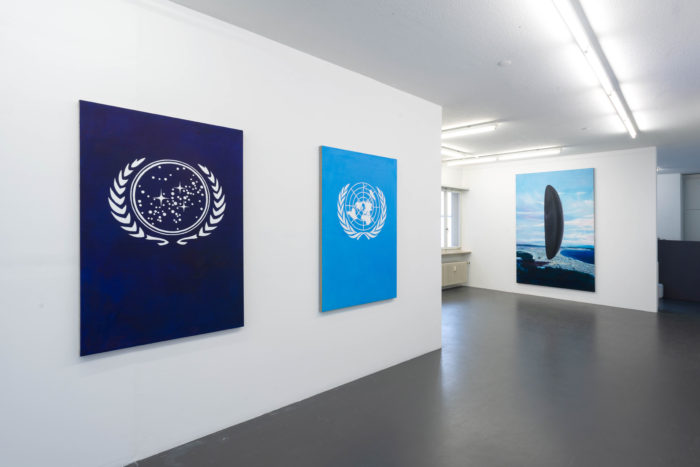 Art / Exhibition
'The Last Terminal: Reflections on the Coming Apocalypse (Part 4 — The Uncommunicative)' at Rib, Rotterdam
Browsing bottom-up alternatives for Art on Web3