Never Underestimate the Power of Rituals

Mara Oscar Cassiani is a wi-fi based artist working with performance, choreography and new media. She recently presented her performance Spirit in the context of Romaeuropa Festival, in the Digitalive section curated by Federica Patti. With this work she won the 2019 edition of the Digital Award.

Valentina Tanni: “Spirit” is the title of the project you presented at Romaeuropa Festival. Can you tell me how the work first came about?

Mara Oscar Cassiani: Spirit, like most of my performances, was born during a night at the Cocoricò. It was at least eleven years ago and I remember it as a fulminating experience. There was an incredible dj set by the Chemical Brothers and I couldn’t help but notice that a ritual was taking place, a ritual capable of bringing people together beyond class. Something fundamental and necessary. From that moment on, the lysergic journey of clubbing and raves became a central element of my creative obsession. But not only. During my web travels, that I consider lysergic as much as clubbing, the emerging of specific signs, non conscious symbols that can be associated with the ritual of clubbing, led me to this idea of connecting ancient folkloristic rituals directly with our new, contemporary folklore.

Being selected to develop a project in Sardinia was maybe a coincidence, or an intuition of the person who called me, I don’t know. But Spirit was my only proposal, and I was amazed of how well the project was received, supported and understood. Also considering the demonization of the word “rave” in Italy. 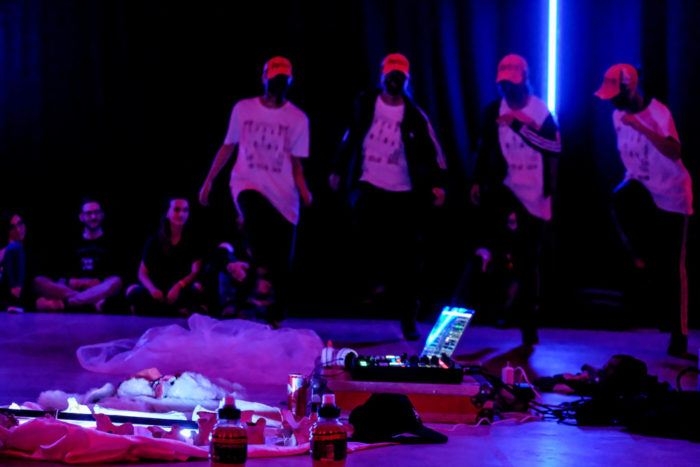 Did the performance change overtime?

Spirit is a remix, a mixtape, a liminal place. Imagine a boiler room suddenly occupied by our agro-pagan past. I spent two incredible months among the Sardinian carnivals in Barbagia, with the locals, and in particular with the women of Nuoro who created this perfect combination of a rave track suit and their clothes made of bones and bells. After the first performances in Sardinia, and with my return in Riviera, all the signs of hybridization—like the baseball cap, the t-shirts, the afterparty Redbulls—have been accelerating, increasing their importance in the context of the performance and its installed component.

In Rome, the hypnotic circle, which recalls the Sardinian “ballo tondo” or the “cypher”, has exploded. The dancers’ chorus and I became one; there was no solipsism, we were all in a single flow, united by music. 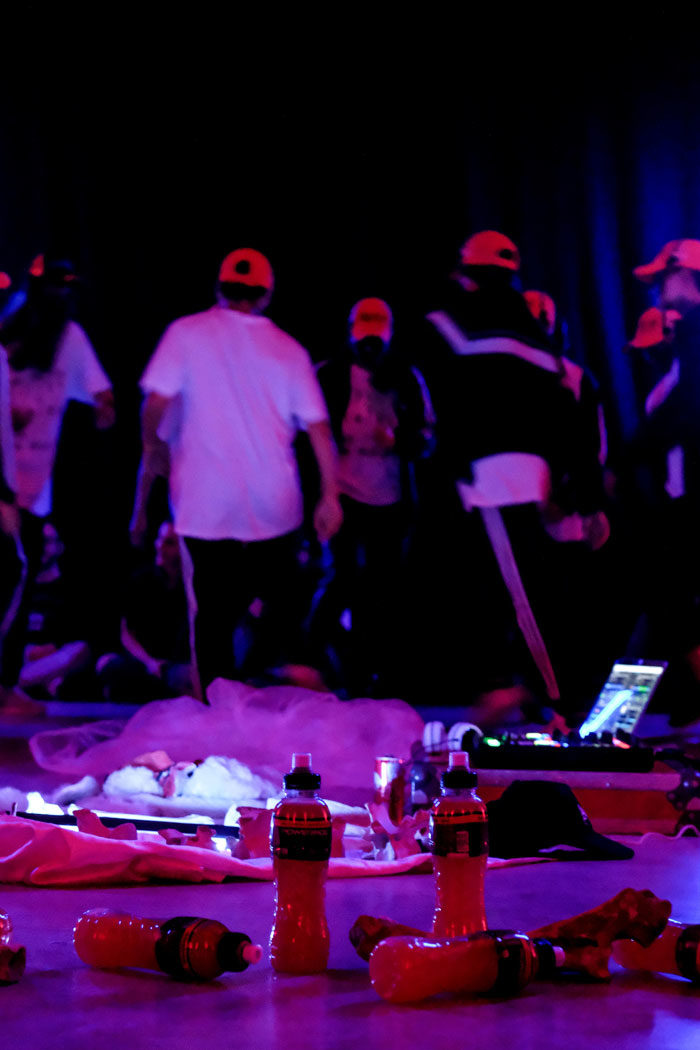 The girls dancing with you were very young. How was your relationship with them?

They were the “girl gang”, a concept already present in Japanese movies and anime since the Seventies. People tend to think about young age as a “risk” factor, but young students are actually really open and humble; this is very important if you have to go through a creative process, and it’s something I don’t find in the so called “master courses”, for example. The girls went all the way, and their attitude was incredible. Before the performance they spent many days practicing repetitive and tiring moves, working on time and doing techno meditation, which is the method I use to understand if you are able to get in the flow of the performance.

They arrive at the performance in a higher state of consciousness, like they were arriving from endless days inside a Love Parade; the first morning is exhausting and it’s the moment when I understand who is going to enter the concept of trance, which is required.

However, like I noticed other times in the past, in Italy there is a sort of natural attitude when it comes to rhythmic dancing, flow and club. At the end of the performance I played L’amour toujours (by Gigi D’Agostino) and they didn’t know I would; but they all knew the song and they danced over it in a spontaneous and epiphanic way. 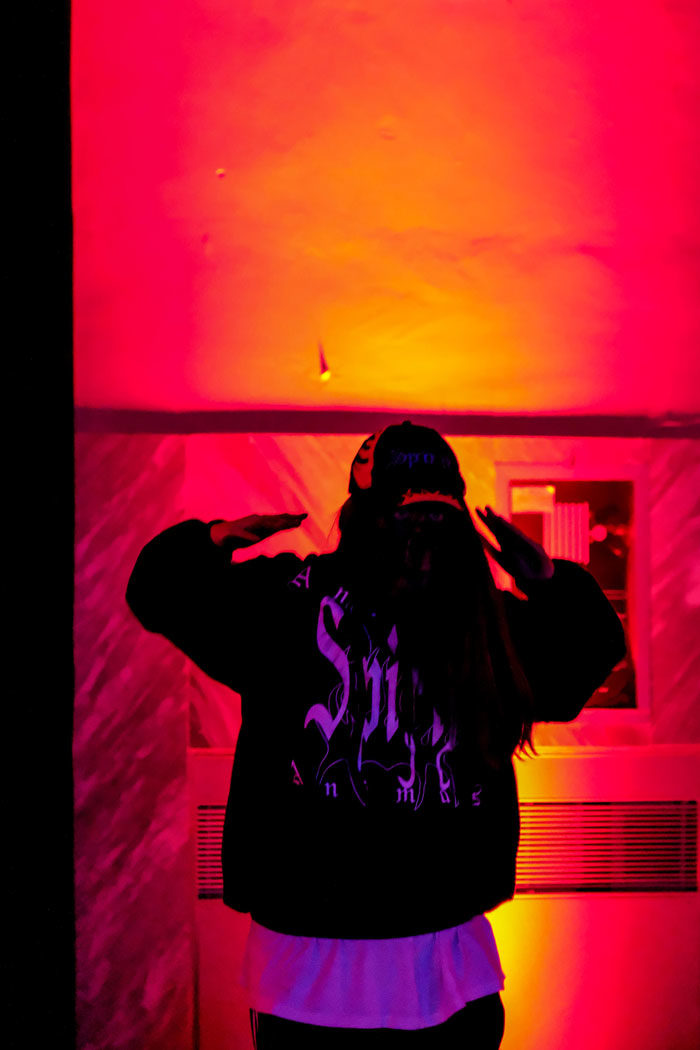 How did you manage to merge ancient Sardinian culture and contemporary rave culture inside the performance? With which objects, clothes, words (I’m thinking about the ones written on the t-shirts), gestures, movements and sounds?

We can use the word “merge”, but we could also choose the word “mixtape”. These two incredible practices are united by various signs: the lysergic presence of red beverages, the identity hiding (that creates a new avatar, different from yourself), obsessive beats and repetitive moves, all the new folklore connected to the presence of stylized animal bones and propitiatory animals. The presence of flames was transfigured in the baseball caps and also in the t-shirts. On the t-shirts there is also a hybrid sentence where the language of the outlaws, appropriated by capitalism, merge with the Sardinian, in its matrilineal side. In plain English the sentence would read “Support your local girl gang”. The red of blood and wine is absorbed and transfigured in the beverages of capitalism, in the Redbull cans, a brand that is ubiquitous in subcultures, with its beast logo and red packaging.

I’ve always been fascinated by the idea of web-surfing as a “dérive”. Nonetheless, today escaping the predetermined paths set by the big platforms is more and more difficult… Which are your surfing habits? During your web travels, which sites do you visit, who do you talk to, what are you looking for (and what do you love finding)?

As I often say, we don’t actually web surf anymore, we are confined inside the ram memory of our devices. The dark net, that could sound as a “cool” response, is not among my interests. Basically, my web surfing is based on a constant hacking of platforms’ algorithms and on the creation of new flows. As soon as you exit the real circle with its algorithms, the characters are always there for you to find. I remember a guy from Hong Kong that performed one of my works online but then he disappeared because the government kept on deleting his web page. Also, a member of an American anticapitalist cult, under investigation by the FBI… I sometimes wonder if they also opened a file about me… LOL. Besides my web journeys, I can boast a net family, united by internet slang and its knowledge. 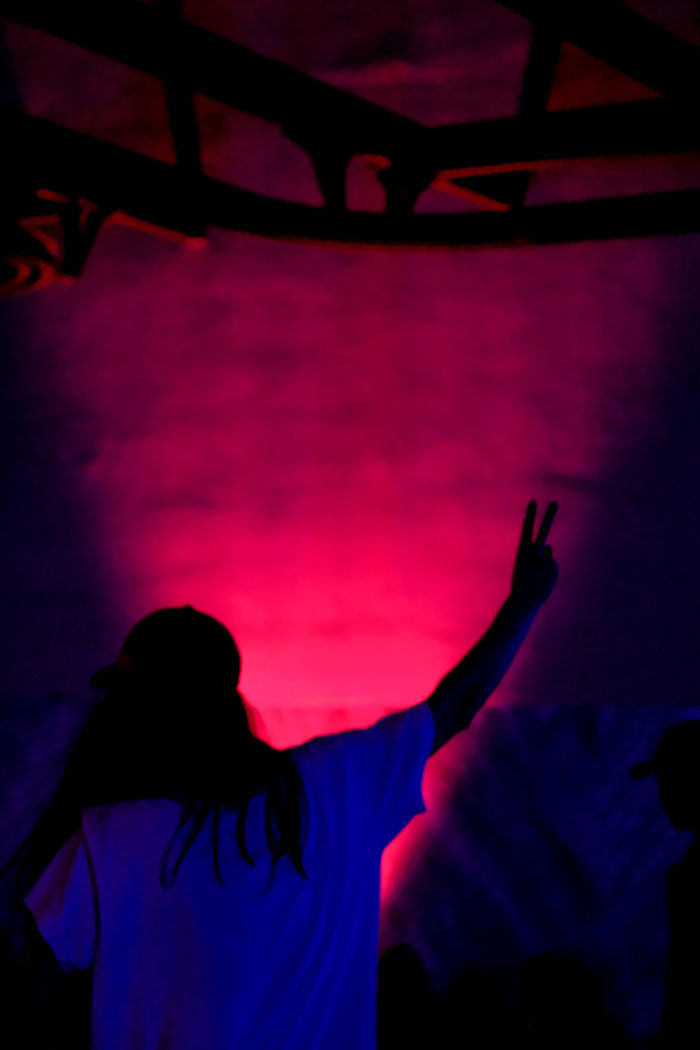 When did you first used performance as a medium? What brought you to this means of expression?

Performance in my case is a direct consequence of the lysergic perception of clubbing and web-surfing, in which the audience changes its role and is immersed, becoming a part of an ecosystem, like in a pagan ritual. The installation is not just a poor scenography at the service of the actor’s performance, like it happens in theaters for example, but it embodies and transfigures more complex symbols, allowing the layering of different signifiers. It also frees the performers from the dramaturgy and opens circular and hypnotic paths. Exactly as it happens in pagan rituals. The synesthetic possibilities are what led me to performance: you can work on different dimensions, like a user immersed into the net, but also surrounded by the immateriality of energy which is produced by action.

Why do we still need the ritual dimension, in your opinion? And how is it different from the past?

This is not really an opinion but more an observation, a necessity I sensed during my various pilgrimages connected to clubbing. In clubbing you can notice the recurring presence of symbols and other devices that trigger the ritual. Today, compared to the past, the ritual dimension is not addressed with the right level of madness, neither with the seasonality. We are living in a complete state of schizophrenia, and the only thing that remains is the desire to release the daily tension. The few rituals we inherited have been transformed into tasting festivals, erasing all the physical component. Probably we still need it because it’s an ontological, matrix legacy; because passing through these processes brings us towards a physiological state of well being, exorcising daily life frustrations. 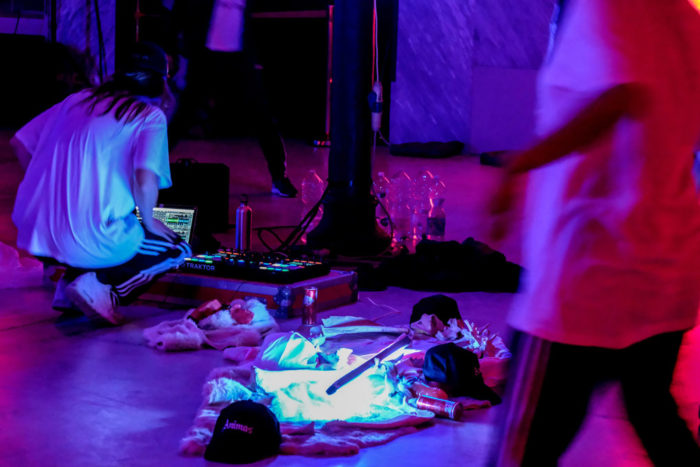 What about the role of music, and sound in general, in your work?

Music unites, as Gigi D’Agostino says, and I will never stop repeating it. It unites in diversity and it’s an additional dimension in itself, a zeitgeist that gathers hypnotic traditional dimensions and immediate subcultural demands, all under the incredible measure of BMP, to which our senses love to adhere or totally detach, creating a USER synesthetic dimension. Besides, our relationship with music devices is probably the first user action comparable to web-surfing.

Music unites, it’s true. At a visceral and instinctual level. For this reason, it cancel diversities and reduces distances. Which other arts are capable of doing that?

All the arts that are not connected to an immediate economic interest, but rather to a mythological and anthropological one, have this potential right now. I think of subcultures, with the dances they generate; but also dance itself, and videogaming, and the network; but I wouldn’t be completely honest if I didn’t mention soccer as well. Roughly, wherever this special flow appears, we can also find certain omnipresent brands.

If you could choose any place in the world, which one would you pick for a future performance?

A future place and a future time, for Spirit. In the future place I see a circle closing and Spirit returning under the glass pyramid that had generated it, which is not the Cocoricò one, but the Louvre one (from which the Cocoricò takes inspiration). The Louvre would be called SPIRIT for a night and would become an open and lively place. And then a moment in the future, in which Spirit has become a global clubbing ritual for all the female and fluid communities and is being carried out simultaneously all over the world, flooding it with pure performative and wifi energy.

Valentina Tanni is an art historian and curator. Her research focuses on the relationship between art and new technologies, and web cultures. She the author of Memestetica. Il settembre eterno dell’arte (Nero, 2020) and she is teaching Digital Art at Politecnico di Milano and Digital Cultures at NABA in Rome.
Mara Oscar Cassiani is an Italian artist working in the realms of performance, choreography and new media. Her research is focused on creating a contemporary iconography, where new rituals and languages stem from the Internet, brutal capitalism and society of Desires.
ClubbingDigitaliveRoma Europa FestivalSardiniatechno
Hardcore as Folklore

Dance / Performance
Michele Rizzo's HIGHER xtn. invaded the museum with a celebration of the nightclub, as a space for self-expression and communion