A conversation between Davide Stucchi and Corrado Levi

Born in 1936 in Turin, Levi is a legendary architect who later on became an artist. After having graduated with Carlo Mollino, he became Franco Albini’s closest assistant, and together with queer theorist pioneer Mario Mieli he co-founded F.U.O.R.I. (Fronte Unitario Omosessuale Rivoluzionario Italiano) a LGBT revolutionary group, combining political activism and self-consciusness as radical queer practice. He is also a prolific writer, particularly of the New Kamasutra, a sado-masochist pamphlet written in the United States in the late seventies, and a co-conspirator of many artists, whom he supported since the beginning of their careers.

Davide is 30 year old and Corrado 83. By necessity they grew up in very different contexts. In fact, Corrado had a wife and two children before. “Then at some point the body commands.” Later on, the meeting with Mario Mieli was fundamental in Corrado’s formation: “I met him in San Babila dressed as a woman, with a long dress, I was in the car, he was on the game, looking for meetings, we talked and became good friends.” A partnership was born, and from there the experience of F.U.O.R.I. “We were revolutionaries, we really wanted to change the world. It was thirty of us, we met every Wednesday afternoon-evening in a different house, and when they killed Pasolini we became fifty to sixty because we were scared.”

Levi is not particularly inclined to talk about the past, and his relationship with Stucchi is rooted in their common interest for the here and now, but especially for this exhibition (Davide Stucchi con Corrado Levi at Zazà), he has agreed to return to his architectural work, which he usually would rather not talk about—and this is perhaps a testimony of how artistically close they are.

In the following conversation, Davide and Corrado talk about their respective most loved artworks and their latest collaboration for the show at Zazà in Naples. 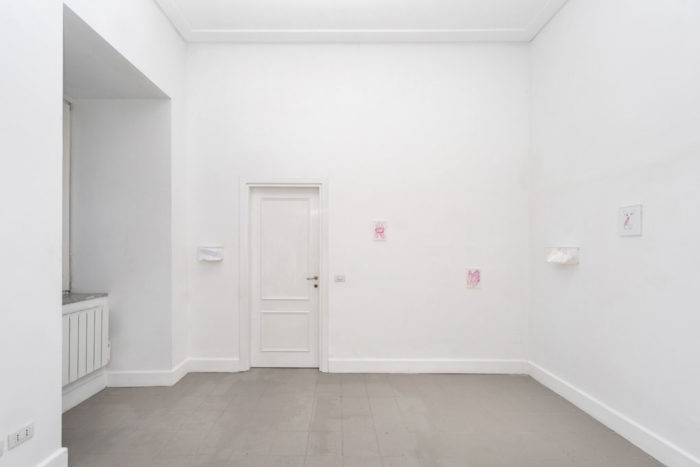 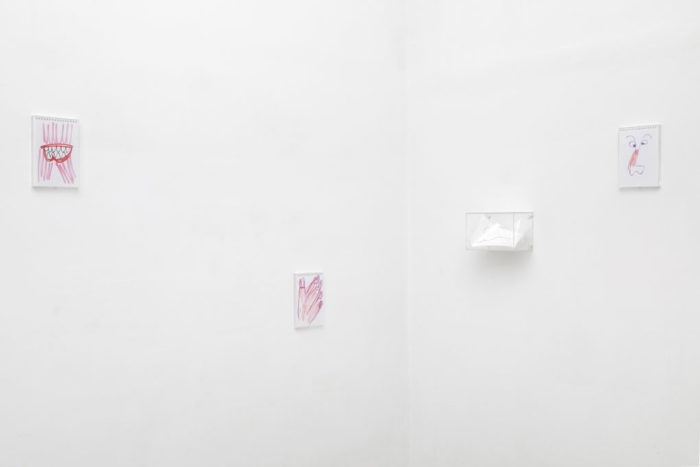 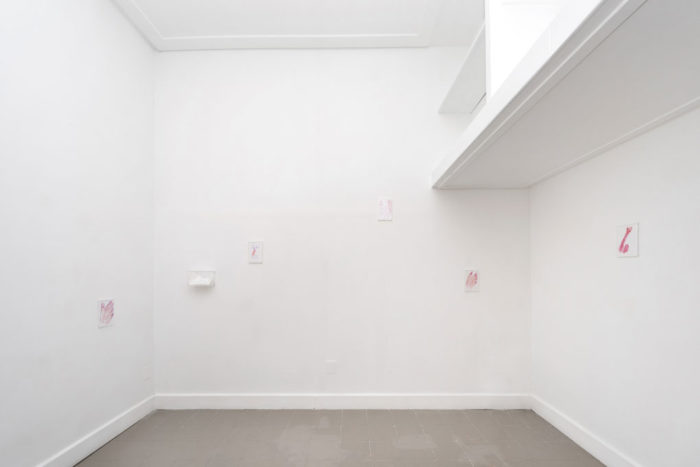 Davide: Last time I visited your place to show you the folder with my erotic drawings, we were sitting in the living room, and I had to think of your personal version of Cicognino (the famous Franco Albini’s stork shaped table), to which you have attached newspaper clippings—a figure of a bare-chested boy, probably a full page of a perfume advertising, with a figure at the center of the page but also, a central one in the dialogue you have with each of your interlocutors in the room. A third one, one observer and one observed, you look at, sometimes, when you get bored of the conversation—as you confessed to me. Do you often get in dialogue with images? 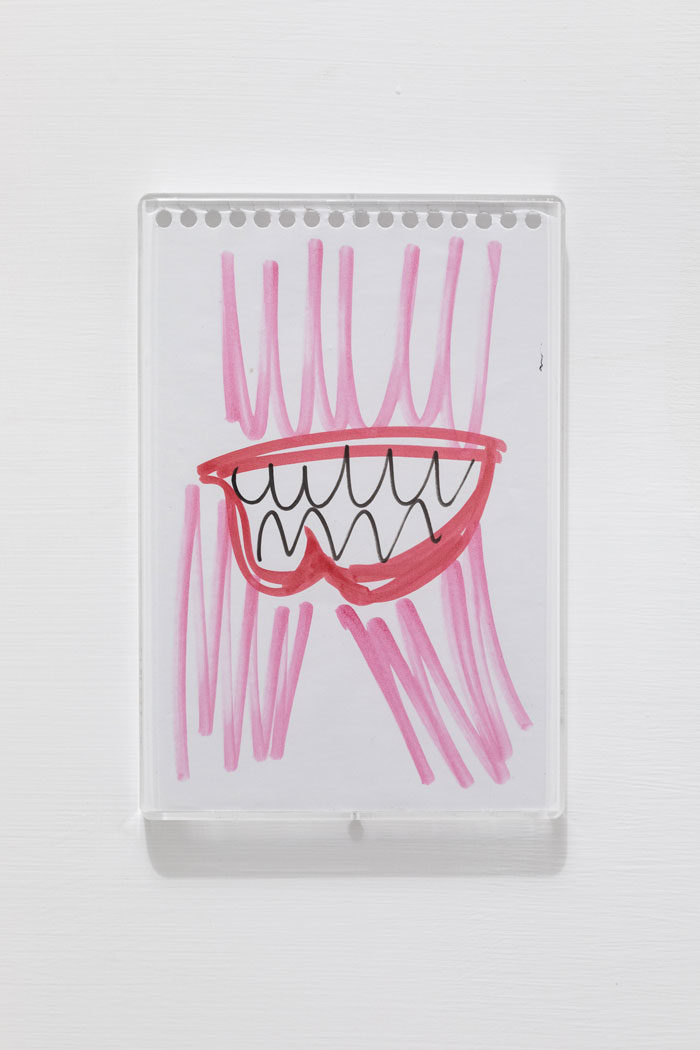 Davide: The work of both of us is linked to the body, and the drawings I showed you were the starting point of the exhibition we did together in Naples, in collaboration with Alessandro Bava. My drawings are choreographies in which the body touches itself and becomes a nomad in itself, the mouth ends up on a butt, and one hand transforms into five penises. As soon as you saw them, you also wanted to tell the way you felt your feet in two shoes, the architect’s on the left and the artist’s on the right. You started to recount memories on the most hybrid projects of your career sketching them on paper. I noticed that here and there penises appear in your drawings too, do they belong to the architect or to the artist?

Corrado: The penises appearing in my works are both of the artist and of the architect. It is like a blessed automatism of the hand. But I also love the parts of the body that not everyone can see: the space between the testicles and the anus, or under and behind the ears; it feels like visiting the intimacy of the other. 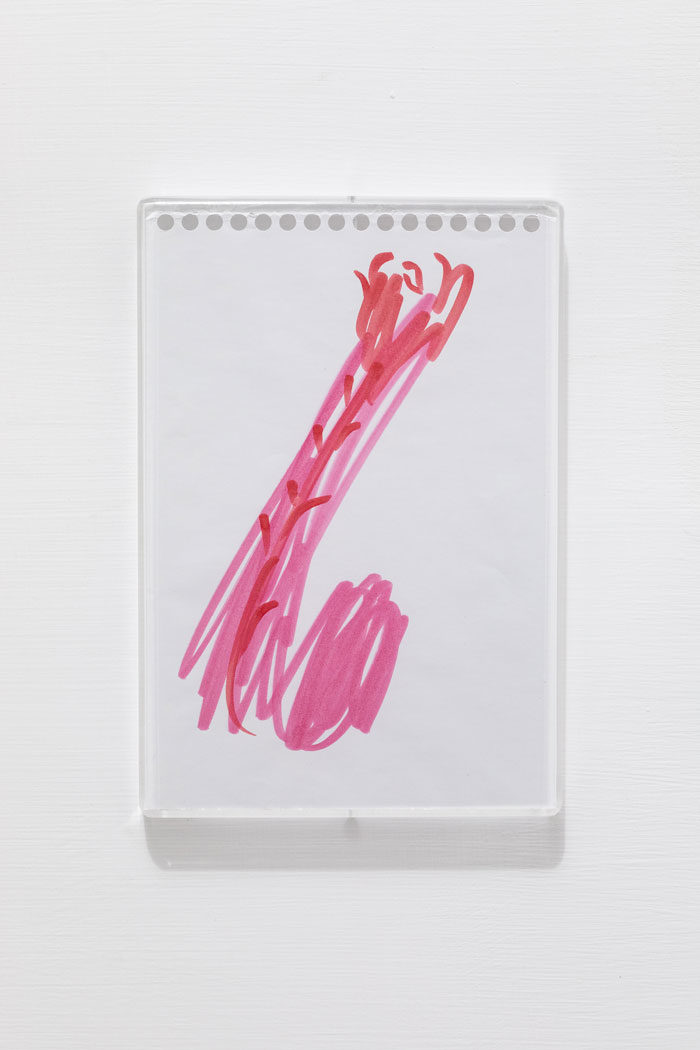 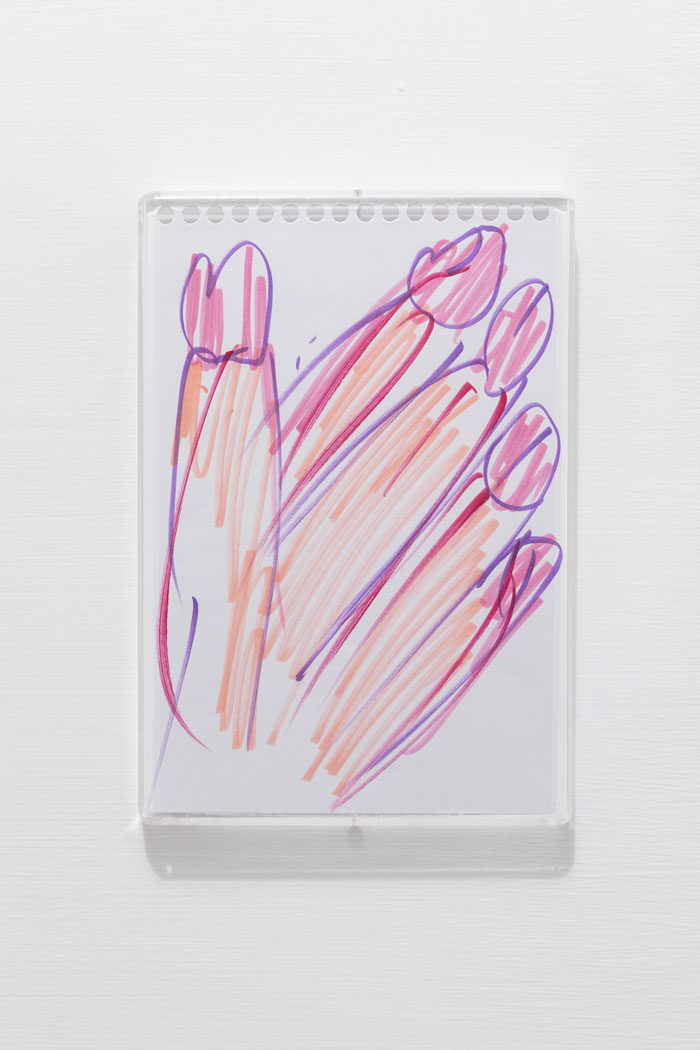 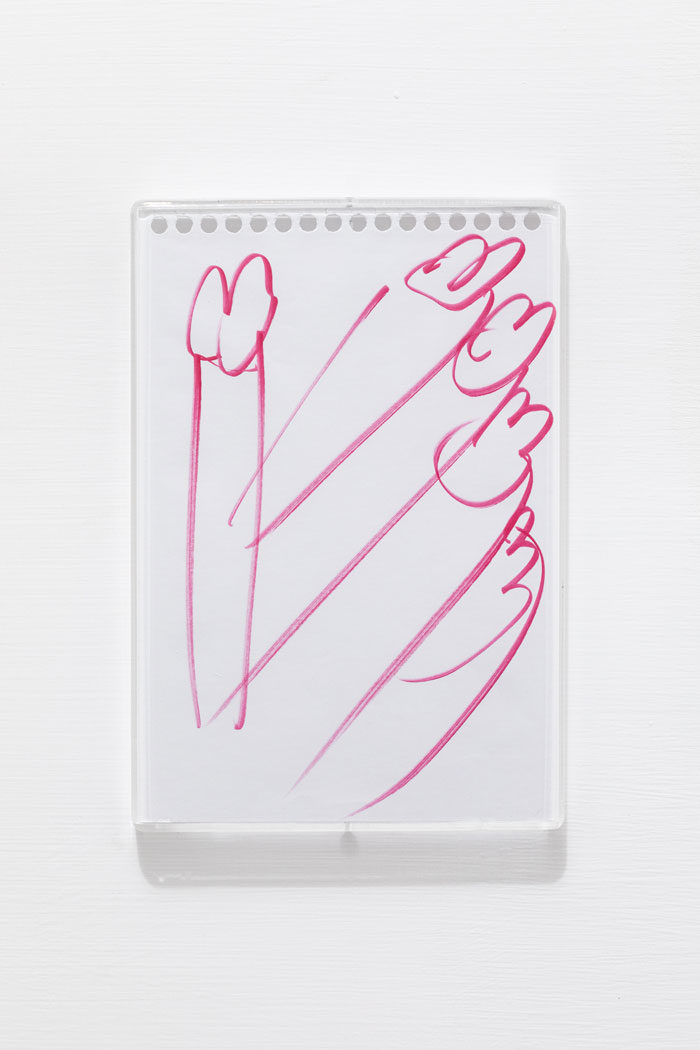 Davide: About intimacy and getting naked, together with Alessandro we thought of including in the press release of the exhibition this particular poem from your book New Kamasutra. Here translated in English:

* (tribute to Sol Lewitt or putting the dialectic back on its own legs)
Corrado Levi, New York, 1979

Why is it dedicated to Sol Lewitt?

Corrado: Due to the combinations! Permutations—like he does, by changing the direction of the line in his drawings. 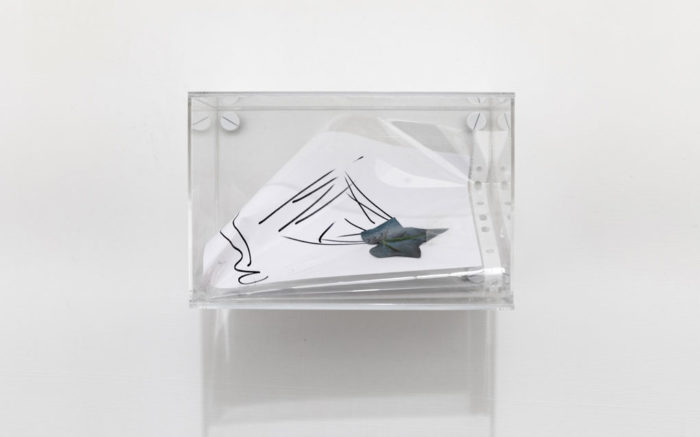 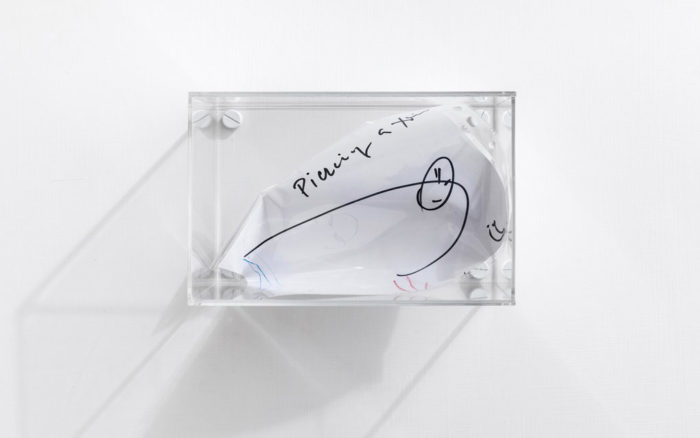 Davide: Soon you will show again the work Belts I heard, which we renamed together  “Desiring friends” on the occasion of my first solo Davide STUCCHI, at galerie Deborah Schamoni in Munich in 2017. How was that artwork born? In what situation and from what need, and if it was driven by a desire, which one?

Corrado: The belts we baptized “Desiring friends”, that I am also showing now at Artissima, with the title “Desiring All” within the context of Abstract Sex, a show curated by Lucrezia Calabrò Visconi and Guido Costa. The work is born as an architectural invention of desires. I envisioned a steel cable pulled diagonally from wall to wall in the middle of a space, two meters above the ground where I hung belts of boys I knew: the wall becomes penetrable. By crossing it, you rub the belts, which are keepsakes of the presence of each of their waist.

Corrado: Why have you invited me to participate with my belts in your Munich exhibition?

Davide: I felt the need to trace a threshold, and thinking of that sculpture as a penetrable device made me want to write to you. I was sure was the right threshold to enter the space I had created. 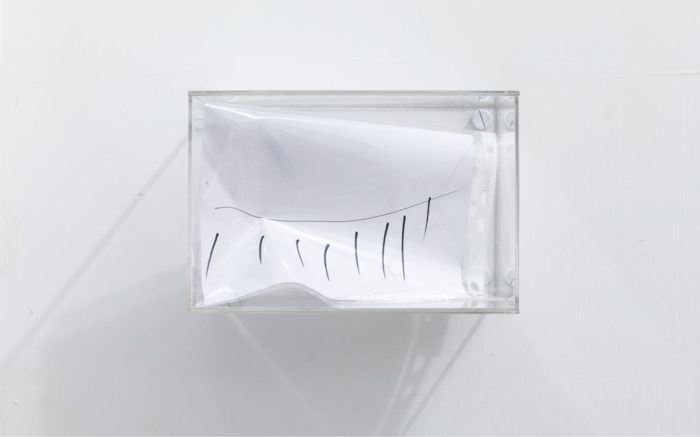 Corrado: In the same show in Monaco besides your noses-penises… an artwork that does not leave me is the one with those very long jeans lying on the steps. I don’t have answers, but I want to ask you now,  how did it come to your mind?

Davide: There, I listened to my legs, I felt their desire for once to be trampled rather than moving over something. Do you remember, when you came back from a trip in New York and gave me a Supreme sweatshirt as a gift—a brand you often wear. Then you also told me, laughing, that queuing is never a waste of time there, as it allows you to understand who else will maybe wear the same shirt. What usually catches your eye on the street?

Corrado: On the street I look at things and, especially in summer, when there is no traffic, I see them and test my judgment as an architect. Since I while, I focus on people and notice the faces of old people, I try to feel their past and present life. When I meet a young man, I observe the lower parts of their abdomen, even in this case, I work on my desire. I am also attracted by proportions, I look at the whole body: they are always a dangerous encounter, indeed! 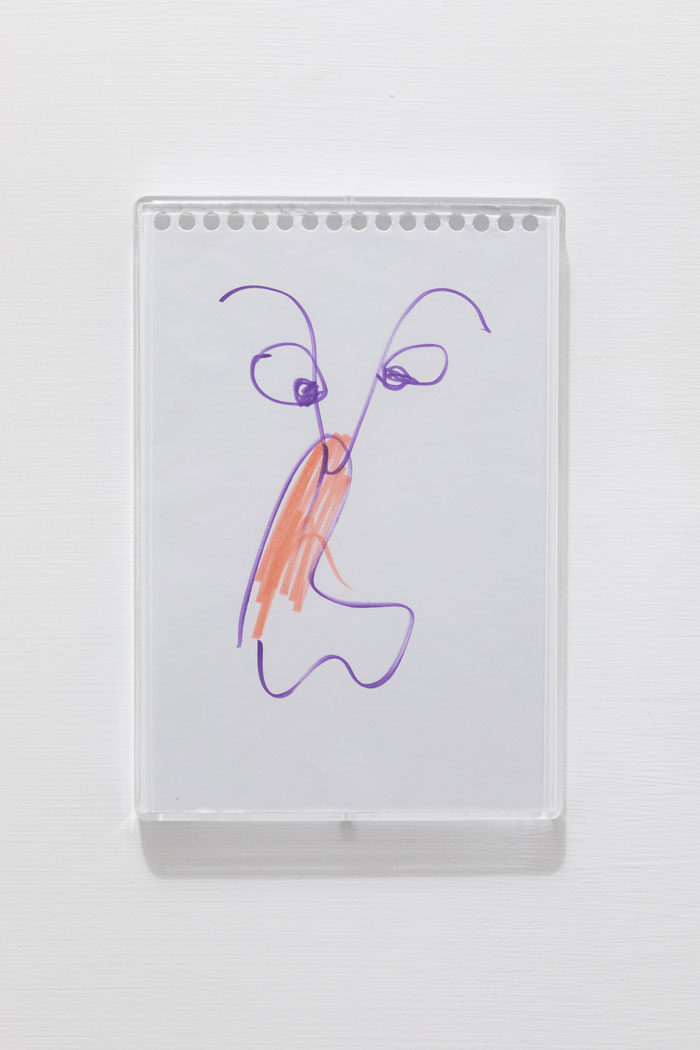 Davide: Few Cupido’s arrows around these days… Is it true that there are no depictions of St. Sebastian lying down? Last winter you invited me to see one of your shows where you designed one yourself. Perhaps the first one ever. How did you imagine it?

Corrado: The horizontal San Sebastiano is a typological invention (those I know are all erected …) and it is a declination of my book New Kamasutra, Sadomasochistic Teaching. Still, I was imagining while doing it, the pleasure of the archers in piercing their arms mate, and the celestial ecstasy of the one who get struck! What a saint! I used real long arrows of the bow and … I enjoyed it myself as well!

Exhibition / News
How difficult is it for a troubled masculinity, a masculinity under siege, to be gentle, or ironic or ambiguous?
Contemporary Queer Carmi

Exhibition / Review
Lisetta Carmi worked as a photographer from 1960 to 1978, capturing her contemporary minor histories