Inspired by the Black Atlantic theory by Paul Gilroy, that sees the Atlantic ocean as a political and cultural system built around the socio-economy of afro-american slavery, Alessandra Di Maio coined in 2012 the expression Black Mediterranean, defining this liminal space of exchange and migratory fluxus also as a territory of racial subordination and oppression. Informed by these theories, the project Black Med by artist duo Invernomuto was meant to become a platform of exchange beyond borders, for artists, musicians and thinkers. Black Med was conceived as a series of talks and listening sessions for Manifesta Public Program at Teatro Garibaldi, Palermo, and as a website, broadcasting video loops and audio mixes by artists, musicians and thinkers invited by Invernomuto

Manuela Pacella: Your project Negus (2011-2016) has led you to tackle topics such as Italian colonialism and postcolonialism, as well as to define a research vector crossing through Italy, Ethiopia and Jamaica, wherein reggae music became the fluid connective matter between the three vertices, as the image of Negus Hailé Selassié I was superimposed with the Jamaican icon Lee “Scratch” Perry. When did the concepts derived from Gilroy’s Black Atlantic and those from Di Maio’s Black Mediterranean collided and became your current topic of research?

Invernomuto: We can easily state that Negus was a turning point in our research. It opened up a vast area of studies that considered Rastafari history on the one side and the ghosts of our colonial past on the other; it deliberately generated a new approach, a deeper awareness of certain topics and the relative urgency to talk about them. As a consequence, Black Med brings those topics closer to us, to our geographies and times. It tries to speak live and direct, louder enough to be heard from the other side of the Mediterranean, that protean geography that was once a place of exchange and movement, while being at the moment something that Jace Clayton calls an “historical anomaly,” for it’s never been so difficult to cross the Mediterranean as it is nowadays. Sound doesn’t ask for permission, so with Black Med we decided to focus on sounds that today—and partly historically—are beyond borders, from any possible direction. 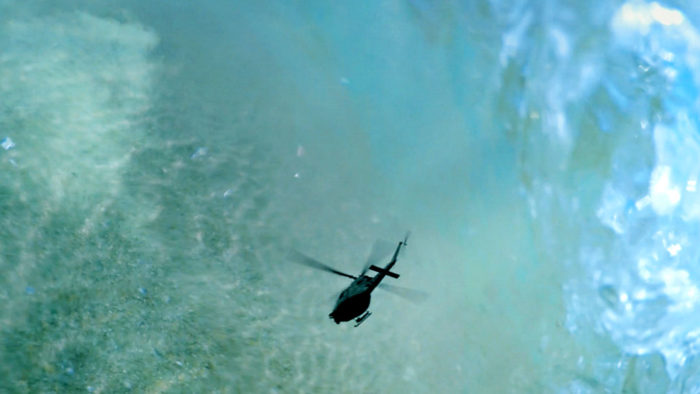 Manuela Pacella: The first event of Black Med at Teatro Garibaldi in Palermo on 17 June 2018 saw the participation of Alessandra Di Maio and Iain Chambers, who introduced the key concepts at the base of your project. Both have outlined their lines of research and clarified why the Mediterranean should be seen as a contaminated, hybrid and fluid space. It was striking to hear concepts and terms that have always been at the heart of your work resonate, as fire and burning meant as metaphor for the transgressive act of crossing the sea by Di Maio as well as the need to create holes in space and time and the idea of sound as a fluid archive by Chambers. Could you give us some more references around the presence of fire in your work (at least since 2011—for instance I am thinking about the poster related to your magazine “ffwd_mag”) and elaborate on Di Maio’s use of the term “burning” as a synonym for crossing the Mediterranean?

Invernomuto: We better quote from Alessandra’s text that she wrote for the catalogue of MAXXI BVLGARI Prize: “The metaphor of ‘burning’ in the sense of ‘crossing’ the sea is used in the everyday Arabic language of North Africans to indicate those who cross the Mediterranean (harraga), hoping to find work, democracy, and better living conditions for themselves and their family in Europe. The verb haraqa (to burn) is used in Mediterranean Africa in various colloquial expressions that always imply a transgressive experience. In fact, to transgress etymologically signifies to ‘go beyond.’” It’s interesting you mentioned the poster of “ffwd_mag – Dungeons and Dregs” because back then the references to fires and bonfires were mostly related to popular culture and cleansing rituals in different traditions and aesthetics, and in that specific case the flames were called Ojo Del Pavo Real, and coming from a fireworks’ packaging we found in an old “magic tricks” shop in Berlin. We guess today that same fire might have taken mostly political and spiritual meanings. Lee “Scratch” Perry had his own reasons to burn down the Black Ark studio and that’s why we invited him to celebrate with us in Vernasca [Ed. Invernomuto, Negus, 2016, film]. 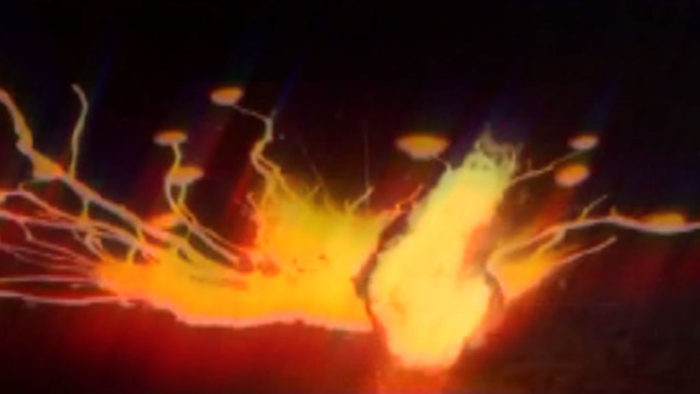 Manuela Pacella: Could you also explain why does sound play such an important role in having a correct understanding of a much more contaminated reality?

Invernomuto: As we were saying sound and music can travel faster than any other thing. Sound often carries different identities and complex realities—we’d like to work on the whole instead of the single parts, also because sometimes they are hardly recognizable. With the tenth mixes published on blackmed.invernomuto.info so far (now collected in a limited edition publication realized in collaboration with Marsèll in Milan) we gathered more than 10 hours of music—and this is just the beginning, we’re confident the research will develop into major proportions. Sound can barely be contained, it floods all over.

Manuela Pacella: How do you see your intervention in a wider panorama and specifically in the art world?

Invernomuto: The series of listening sessions we developed for Manifesta 12 works as a sort of lecture performance, as keynote presentations accompanied by a music selection. They can work on different levels and in different contexts. For example we will perform the three chapters in December at Dansem—a contemporary dance and performing arts festival in Marseille. As usual, we designed the project to have access to different disciplines, frameworks and distribution possibilities. 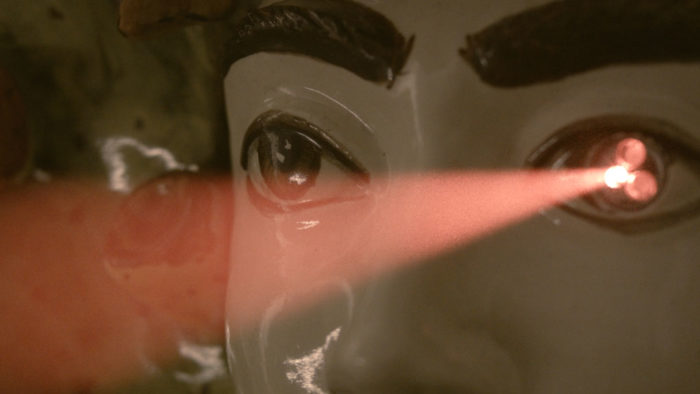 Manuela Pacella: The idea of a series of three live interventions with talks, listening sessions and a constantly updated portal is also linked to a practice you have always believed in, at least since 2008-2009. I refer to the trilogy Village Oblivia, a performative work that has seen the participation of many different guests and that did not go beyond the experience of those who had the chance or the ability to see it. Therefore, I believe that having chosen a mode of labile presence in such important occasion as Manifesta 12, not only reflect the theme of this edition of the traveling biennial but in some way respond to a generally speaking urgent need. Then why have you proposed this format rather than presenting a more “stable” and visible work throughout the opening period of the Biennale?

Invernomuto: The initial proposal also contained a two/three days music festival, inviting other artists and many musicians to perform in Palermo. Eventually it couldn’t happen, but networking and collaborative practices in a live environment has always been part of our methodology, from this point of view Village Oblivia is certainly a good—if not radical—precedent. Our “immaterial” participation was also discussed and in a way commissioned by the curatorial team of Manifesta 12: they asked us to interact with the three main themes of M12’s public programme, namely Borderless, Accountable networks and Interspecies. 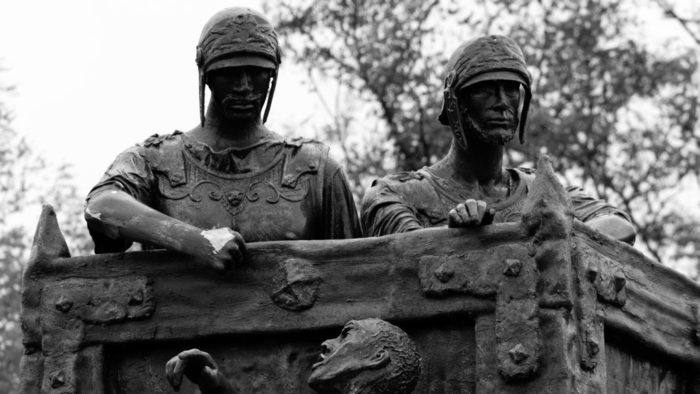 Manuela Pacella: How did you select the online mix demos? What were the most significant interventions or those that directly addressed the issue of migration—or “double consciousness,” and those that most symbolized the hybridisation of cultures?

Invernomuto: We needed to collect as many points of view as possible on the topic. The issues involved were many, actually, surely migration and contemporary migratory routes were significant starting points, but not the only ones. We wanted to avoid selecting contributors only according to their provenance. So we looked for friends, scholars, musicians and researchers that could add an interesting and unique take on the topic. In a way every contribution has a specific meaning toward what you’re saying in the question, in some cases certainly more explicit than others. Each mix contains different possibilities of movement for music and sound related to the Mediterranean. 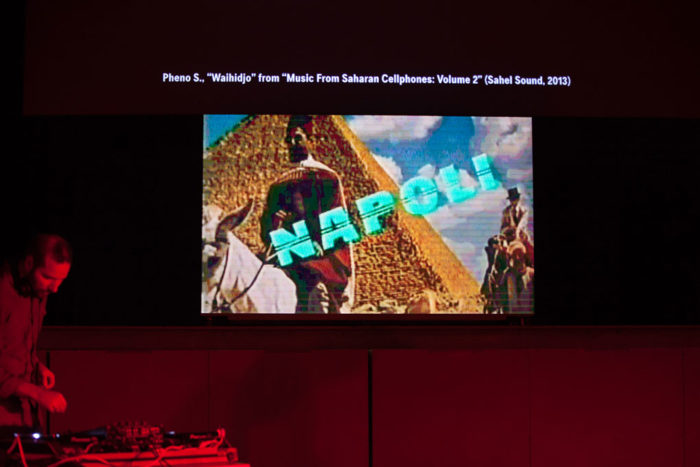 Manuela Pacella: What are the possible future developments of Black Med?

Invernomuto: Well, we consider Black Med as a new cycle of works, that will hopefully accompany us through the next years. So far, we have explored the aural and theoretical dimension—but we also wish to develop the project in visual terms. There’s so much work to be done. Obviously, we need to study a lot; the listening sessions are composed by three chapters at the moment, but potentially they can grow and stem into many more configurations. Thanks to Manifesta, Palermo has been the point of the departure of Black Med, but we look forward to navigating to other cities such as Marseille, Naples, Gibraltar, Tangier, Cairo and many more. In more practical terms, we will soon rethink the website blackmed.invernomuto.info 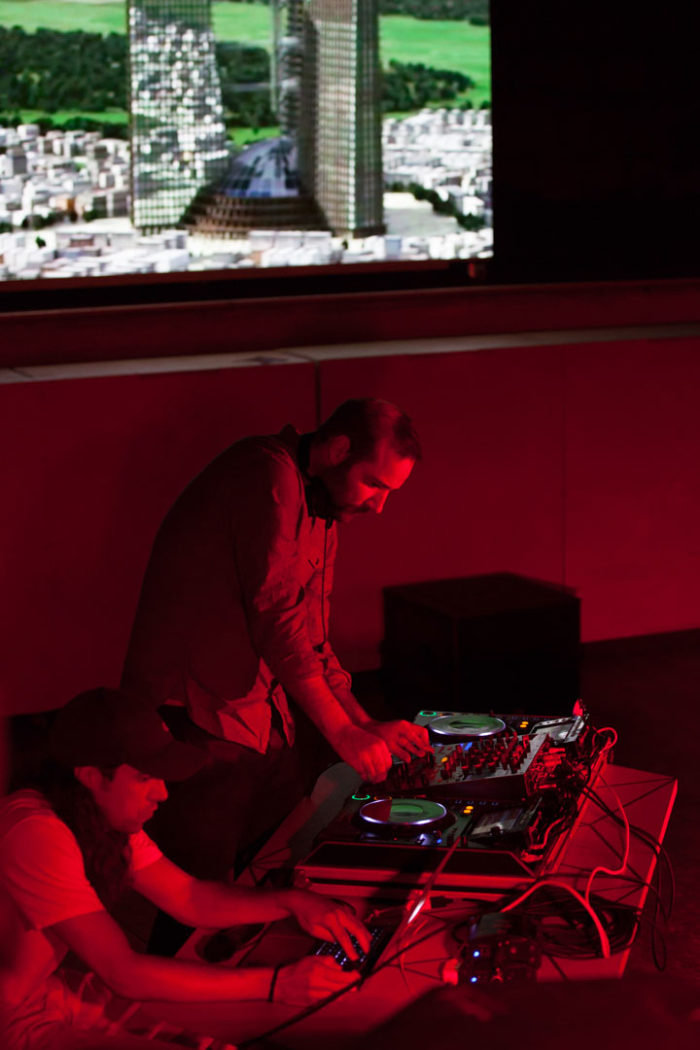 Manuela Pacella: Iain Chambers in June, as well as the writer and artist Jace Clayton aka Dj Rupture, were invited with his radio session for the September 30th appointment to speak about the concept of “Uproot”. The former claims that “music uproots and reroots where we are thinking we are going”. While Clayton uses it on the title of his 2016 book Uproot: Travels in 21st-Century Music and Digital Culture. How important do you think it is to “uproot” in order to see reality from a different perspective and how does this mode clash with the actual media and political reality?

Invernomuto: Contemporary politics are going exactly in the opposite direction of uprooting. They are inventing new ways of considering identities unique and sealed in themselves. And throughout this process they shout abruptly. Music can be a tool to fight against this approach. Sounds can bang louder, especially in certain areas—and flow freely, reaching more and diverse audiences. The Black Med invitation is to reconsider this possibility.

Manuela Pacella: How important are the studies derived from the concept of Black Atlantic in bringing a different point of view (or plural points of view) on today’s migration “crisis” according to you?

Invernomuto: Gilroy taught us that culture can be multidirectional and can incorporate elements from different origins. He also taught us how to be playful in observing these complex realities. Today’s crisis—which is not so recent unfortunately—surely cannot be solved by these theories, although they can definitely contribute to a better understanding of it.

Manuela Pacella is an art historian and critic. As a freelance curator she works on cultural exchanges between Italy and some countries in central and northern Europe. In particular, she is an expert on the Northern Ireland art scene where she has been working since 2011. Currently she teaches at IED and the Fine Arts Academy in Rome and she is the ideator and curator of the monthly online column Tell me stories! on Flash Art Italia as well as of the website Ruth.
Invernomuto Simone Bertuzzi (1983) and Simone Trabucchi (1982) have been collaborating as Invernomuto since 2003. Employing mainly moving image and sound, but also sculpture, performance and publishing, the artist duo explores the remains of subcultures, oral cultures and minor histories.
manifestaMediterraneanPlatform
Italian Southern Gothic #1: Black Sun

Italian Southern Gothic
Jim Jupp from Ghost Box and Italian Okkult hero Mai Mai Mai comment on a selection of Italian folk music, Southern Psychedelia, and post-neorealist soundtracks
We All Need to Get Out of Here