Those Who Handle It

Smartphone technology is a quiet agent, discreetly involved in everyday experience. In Marianna Maruyama’s Permissions A.K.A. Loving with Both Hands, personal devices are exploited to generate events and questions on the spot. This piece exposes a story centered on feminist perspectives, data ethics, and privacy concerns.

A while ago I found myself in the comments section of a website that compiled lists of those telemarketer phone numbers you’re advised not to answer. A sense of irritation was in the air and an argument had broken out. One commenter, clearly outraged, was venting publicly about the very existence of these numbers, another responding with complaints about their email form: those strange alumni lists you end up on from schools that you both didn’t go to and presume don’t exist, or the automated realtor who writes to you every month on cue for the last year, asking you to sell the house you live in but don’t own. There are warning signs in these forms of communication; they declare themselves fraudulent on arrival.

Though the audibility of these warning signs varies in scale, some of us don’t have a sufficiently trained ear, one able to detect their nuance. My grandfather once complained to me that Optus, the telecommunications company, was like the Gestapo. A damning comparison, but being the Czech immigrant to Australia that he was, I knew what he meant: you can’t escape them. They gather data, compile a record and persist accordingly. This was uttered following the wireless modem that arrived promptly on his doorstep after a call one afternoon. He neither wanted a modem nor knew what it was, and yet there it sat. I tried to imagine the conversation, the moment at which he was deemed to have given his consent. What could have been the bare form of the question that extracted the verbal signature of approval the operator was after? “We will send you a modem in the mail, do you understand what I am saying?” perhaps. “Yes”, he probably replied. Of course, if following the actual prompt in the question, which was specifically to say whether you understood what was being said, not whether you agreed to it, “yes” would have been a correct answer, even if you weren’t ever interested in the twelve-month Internet plan on offer. Yet upon the word’s utterance, the operator would have extracted the intended permissions. As such, both these situations—the telemarketer and the nagging phone calls—have at least one thing in common: they begin from the end. You have to opt-out before even having opted in. One of the people in the comment section of the phone number website, proudly male, suggested using their own technique against them in the first place. “What’s the problem here? When a telemarketer calls me I don’t even wait one second, I just hang up.” To which, perfectly wry, someone responded: “How pray tell, do you hang up on an email?” 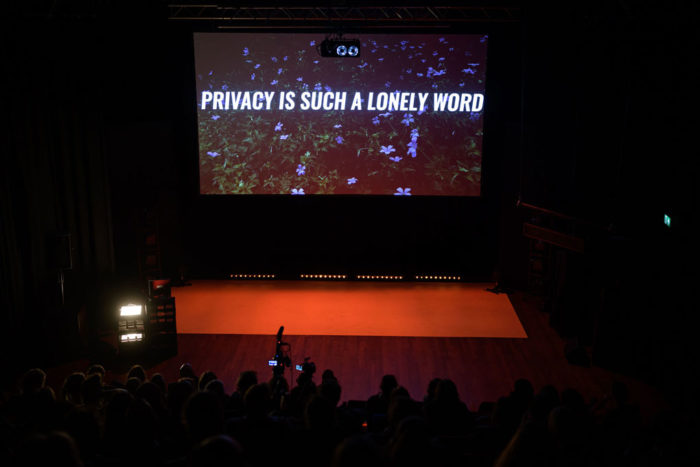 This is a long-winded way to introduce Marianna Maruyama’s recent work Permissions AKA Loving with Both Hands—a culmination of a two-year research period and an infatuation with Yamaguchi Momoe—but the tediousness is important when we are talking about the ways in which we are exhausted into positions of consent. Language has its way with us, and clarity is robbed bare. At a time when it is finally stressed that consent is the explicit naming of “yes”, rather than just a lack of “no”, how are the loopholes of data protection policies and opt-out methods confusing this understanding of permission? For there is a violence in a negation that asks us to “tick this box” in agreement so as to precisely declare our lack thereof. As contemporaneity would have it, we are unwittingly signed up for a life of public disidentification that is forced to operate through the very metrics that it goes against: the activity of declaration.

This is well-known, for example, to Yamaguchi Momoe, a Japanese former actress and singer who famously retired at the ripe age of twenty-one. Despite being a hugely celebrated public figure, having released thirty-two singles and twenty-one albums in the short span of an eight-year career, Momoe, now sixty, has never made a public appearance since. Yet still to this day, her and her husband, actor Miura Tomokazu, are hounded by fans who wish to force her back into the public eye and thus defy her insistence on privacy. When telling me about Momoe, Marianna asked me, “How do you exit the conditions of a contract you signed when you were very young?”

This is a question that can be, if taken broadly, complicated along the lines of responsibility. Are we exempt from the repercussions of our actions if we were too young to understand that we were making them? What then is “too young”? Yet, in the case of Permissions AKA Loving with Both Hands it becomes immediately apparent that Marianna is precisely talking about the moments in which we are forced into a contract without possessing the knowledge of its scope. This is surely to be mishandled. And as a result of its pervasiveness, the assurance that our information is in “good hands” is something we constantly have to navigate. In performing her work Permissions AKA Loving with Both Hands Marianna plays with this navigation through successfully and blatantly extracting the phone numbers of complicit audience members in the name of an interactive experience.

And so I sat in the audience as I watched people in front of me type the number flashing on an LED screen into their phones, naming the contact something suitably depersonalized and pragmatic like “Performance” and proceeding to text what was asked of them: their own name. In such a moment, the anonymity of the bodiless voice urging us to engage is disguised by the informality of personal declaration: “I’m lonely, text me, NOW”. Yet through this, and without revealing a name or any descriptive details itself, the voice proceeds by asking for the audience’s most basic from of identity. The durational nature of the performance and its utilization of the architecture of theatre—the stage lights flash green, red and blue, an electronic composition, pleasurably heavy on auto-tune and recorded voice, drums throughout the sound system, a video composed of intimate scenes shot entirely on phones, underscoring the capability these ubiquitous devices have to be directly proximal to the personal, beams on the overhead screen and the central part of the stage lays exposed, though largely bare—also generates a sense of reckoning. It felt as though there was something coming. This was perhaps due to the interactive nature of the instructions being delivered to the audience, through which the anticipation of sending a text and awaiting a reply multiplied the frames of action. Would a text prompt something on stage? Would the phone screen become an individualized site of performance? What did it mean to all be together shifting our gaze between the privacy of our phones and the publicness of a stage that still, by the end, remained empty?

Marianna also told me that an audience member complained that he thought the space between his initial text and the reply he received midway through the performance was too long. This expectation to perform was something woven throughout the work from the beginning, and perhaps stood as an empathetic nod to Momoe herself, who, despite breaking the contract binding her to life of publicness (the one that she signed when she was very young), is still constantly held captive—thanks to the specter of her diehard fans—to the very contemporary idea that we should be constantly available to each other at all times. The performance plays with this well, with Marianna herself only giving the audience the satisfaction of seeing her present right at the end, once the lights are up and she is to take a bow. In this simple gesture of negation—of refusing to be constantly available—Marianna and Momoe collapse the line between the gendered history of the gaze and the gaze of securitization itself, insisting that our default position does not have to be one primed for the mining of data, of desire, in the interests of those that ultimately work to exploit the human wish to feel safe in being social. 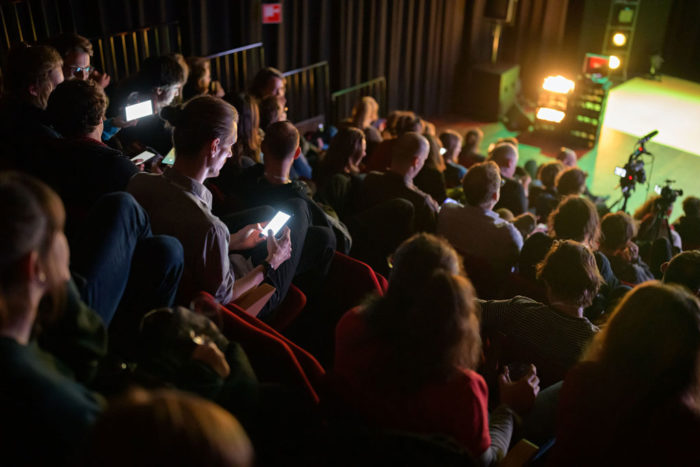 At one point throughout the thirty-five minute performance, the LED screen flashes, “I guess you love me because you never let me out of sight”. In an eerily banal manner, the sentence pulls on the all too familiar narrative of repackaging possessiveness as affection. Yet here, in again negating the actual realness of being live and present, the pre-recorded voice carries with it the process of scripting and editing, again refusing to be mined for raw emotional connection just because. As the voice goes on to say, “Of course, getting some privacy isn’t about hiding, it’s about what can be gained from knowing.”

In the Netherlands the “public protection” officers—the people who look like police, who are intended to make us feel like they are police, but who don’t actually have the permissions to act accordingly—walk around with the word HANDHAVING printed on their backs: ENFORCEMENT. I was told that you can also handhaven someone, in which case the word becomes a verb: “to maintain”. Or, in reading the English in the Dutch and seeing what it is to have hands, to be hand-having, I couldn’t help but think of the ways in which hands do in fact enforce: to manhandle, to mishandle, to handcuff. Apparently, you can maintain someone. Momoe famously quit her thriving career to be a housewife, something she has done proudly since, replacing her voice with her hands as her main instrument and proceeding to produce intricate quilts alongside her domestic duties. As an almost ode to Momoe, Marianna’s recorded voice states at one point during the piece, “I was looking for a way to be free. Love and labour became the same thing.” In a work that underscores the labour of being public, Momoe’s decision to go from an individual, self-expressive pop star to a doting wife begins to have a rather ironic twist. In compounding the pressures to be permanently visible and constantly available, while at the same time purposefully mining audience data of her own, Marianna’s critique doesn’t necessarily place us at the point of despair. Instead, through treating consent as key by becoming an ethical data collector herself, and in learning from Momoe, she considers how our desire to be social doesn’t have to be held captive by data collection and the multinational companies that harvest it. Rather, it’s in solidarity with those who, despite appearing susceptible to the mechanisms of control, find other ways to handle it.

Isabelle Sully is an artist, writer and curator living in Rotterdam. She is the founding editor of Unbidden Tongues and assistant director-curator at Kunstverein, Amsterdam.
consentinteractivityprivacyYamaguchi Momoe
Subverting the Archive

Art / Exhibition
Through the story of how a little pagan hunter became a Catholic priest
The Small Utopia. Ars Multiplicata