Raffaela Naldi Rossano, This Is Just A Mirage, 2019

The Myth of the Permanent Crisis

Can art be a love currency for transformation? A review of Raffaela Naldi Rossano’s works, from myth to financialization

The myth of Parthenope (Παρθενόπη), like every myth, has numerous variations. The motif that keeps repeating itself in every version is the one of a female-like figure, a siren, who dies for the love of Ulysses, creating through this act the city of Naples that initially took her name. Mythology depicts Parthenope as a gender fluid creature which is at the same time a powerful, rebellious and seductive woman but also because of those characteristics she is considered to be a danger to society. This reference becomes the center of Raffaela Naldi Rossano’s approach to the notion of formation and transformation within communities and identities. The installation at Aetopoulos project space is the mirage of a futuristic ‘’topia’’, with the prefix u- or dys- treated with a question mark. Different temporalities and spatialities co-exist in order to explore the ways and the limits of transformation. — Danai Giannoglou

While the 2015 Greek government debt crisis was ongoing, I recall posting on Facebook the project designed by Prussian architect Friedrich Schinkel for the Acropolis; a beautiful palace for the German teenager king appointed by the Great Powers after the Greeks won their independence from the Turkish Empire, which integrated the ruins with a new hypertrophic greek/roman villa sprawling with courtyards and porticos on the east side of the Parthenon. In those times architecture used to materialize and manifest power relations and political transformation, while today the power dynamics at play in the European Union are far more difficult to read and only surface when large amounts of wealth move, and slowly and atomically modify psycho-material realities. 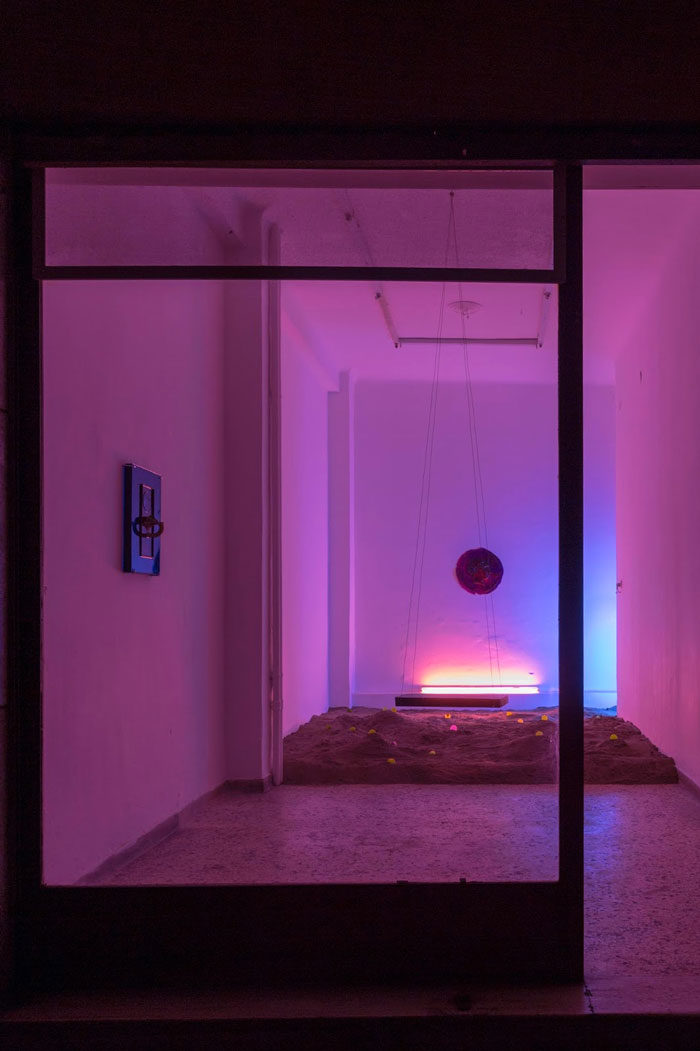 Today, permanent-crisis Europe is lead by the French and German superpowers, but if Europe has a future as a geopolitical agglomeration, this is to be tracked down in those regions where the current dominant powers have made life harder; those places at the margins where the current scenario’s antibodies are being produced and can reveal another way forward.

The exhibition by Raffaela Naldi Rossano in Athens emerges from this landscape. The artist lives in Napoli, in that South of Italy that used to be called Magna Graecia. The artist’s starting point was the foundational myth of Naples, the story of the mermaid Parthenope and its connection to Greece. Parthenope’s myth connects the foundation of the city with an act of love and passion, both in the traditional story where the mermaid Parthenope is seduced and abandoned by the greek hero Ulysses, and in the modern story written by Neapolitan writer Matilde Serao, in which the young couple Parthenope and Cimone escape the girl’s arranged marriage by moving to the healing and bountiful bay of Napoli, where she’s believed to be still alive, next to her children. 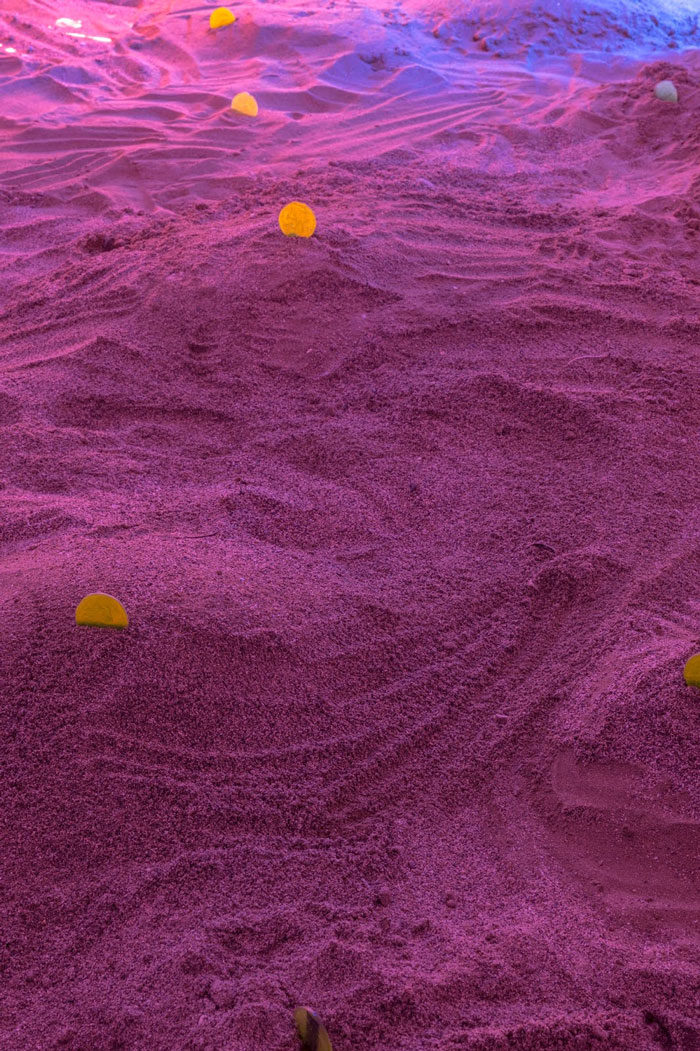 Raffaela Naldi Rossano, This Is Just A Mirage, 2019. Site-specific installation with sand from Napflio and resin coins, Dimensions Variable. Courtesy the artist. Photo by Athanasios Gatos

The sense of belonging and community is challenged by networked culture. As our individual worlds become more manifest, the structures that bind us together in communities are challenged, to the point that we start asking ourselves if we are even dreaming under the same sky. Naldi Rossano assembles a mise en scène attempting to connect the dots of community-making, colonialism as an act of “creativity” and the disembodied intelligence of currency systems.

In the exhibitions ideas take shape as an environment shaped by few elements: a larger coin in colored cast resin hung on the back wall in a way that’s reminiscent of a palatial portrait; smaller coins of the same design set in a sea of sand which the artist collected in Nafplio, a Venetian colony in Greece modeled after Napoli; and a rectangular resin cast object with some ancient terracotta artifacts stuck in it. I am personally particularly interested in the idea of the artist coins, in recent years there have been several experiments in artists cryptocurrencies and alternative funding models, and as I’m writing this text, a Youtube Ad interrupting my stream of random jazz reminds me of how much money Jeff Bezos makes per day, and how I should aim for the same. In a market-based art ecosystem, artists’ creative capabilities are ultimately harnessed as minting machines, not only for value creation but as actual simulacra of currency. 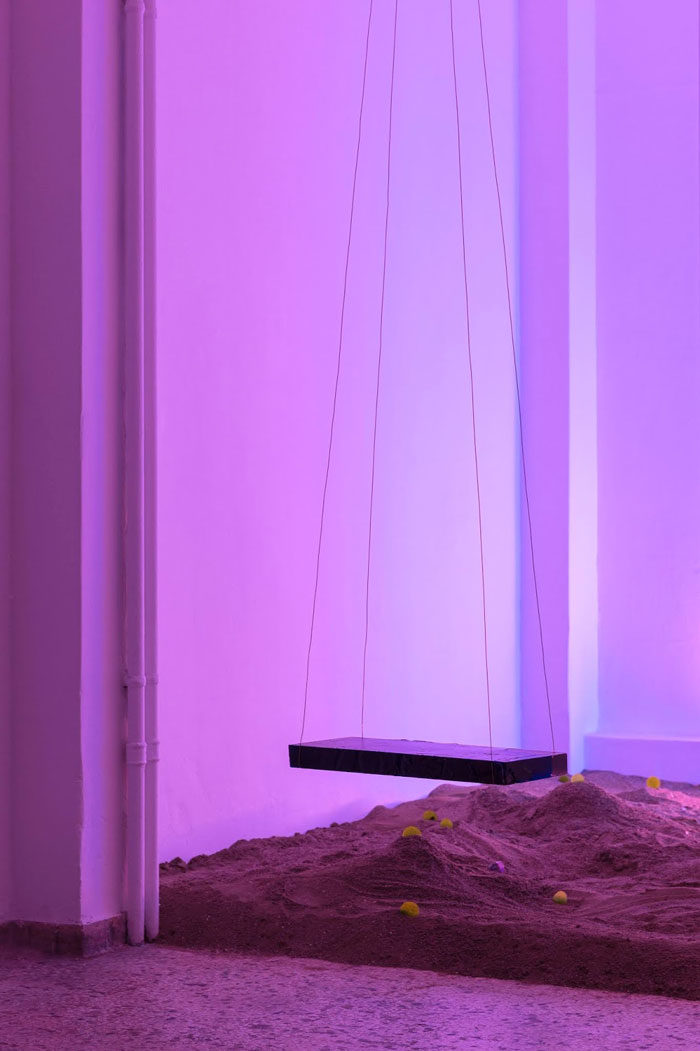 Raffaela Naldi Rossano, What is Going to Happen If You Start Swinging With Me, 2018. Courtesy the artist. Photo by Athanasios Gatos

During the banking crisis which followed the debt crisis in 2015, images of people queuing at ATMs in Athens flooded European TVs, as a memento of what could happen when a nation couldn’t meet the standards set by the European Union. Also in 2015, during the mass revolts that happened in Greece following the emptied out cash machines, Franco Berardi wrote: “since Maastricht, the Union has purely been a financial project of predation on social wealth in favour of the bank system, and a project of impoverishment and disempowerment of the workers.” This project of predation manifests in artists’ constant struggle to emancipate themselves and the value of their work. The aim is to reject the financialization of creativity by the liberal order, in order to strengthen their political agency, not simply by signaling issues and making things visible but by fostering the imagination of alternative models, experimental modus vivendi, and ways of seeing.

Naldi Rossano engages with this idea also in her practice as a “host.” Her work on Naples is not only the theme of the exhibition in Athens, but also central in the residency project, called Residency 80121, she initiated in her grandmother’s apartment in Chiaia, a traditionally upper-middle class neighborhood. There, she invites artists to work with the substratum of the apartment history, with the idea that this practice will eventually have a transformative role over the conservative and bourgeois ethos of this part of Italy, an ethos systematically binding its inhabitants to the currently dysfunctional mechanisms of financial capitalism in Europe. This project is based on community making and feminist mutual care giving, which would be seen as gentrifying in other contexts, but here seems to promise a different kind of transformation. 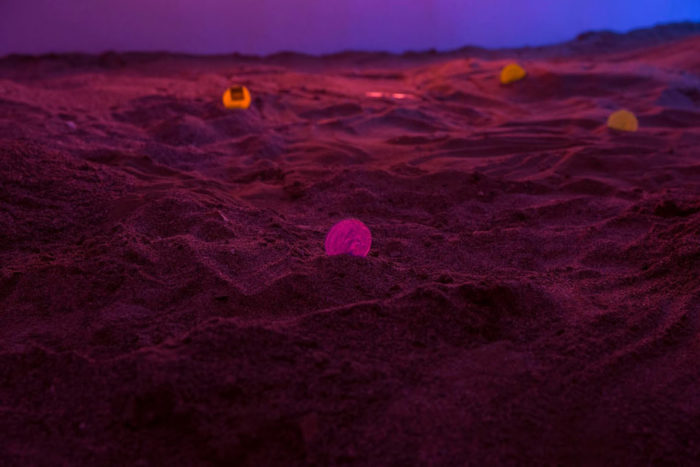 Raffaela Naldi Rossano, This Is Just A Mirage, 2019. Site-specific installation with sand from Napflio and resin coins, Dimensions Variable. Courtesy the artist. Photo by Athanasios Gatos

The exhibition in Athens is hosted by a similar project, namely Aethopulous by artist Alex Eagleton. On the wave of the urban creative energy released by Documenta, which has left in the city a novel way to look at itself after the devastation of the continental games of debt—despite a legacy of healthy polemics. This energy emerging from Southern Europe should be channeled to untangle creative production from the neoliberal kiss of the death of creativity as alchemical value production, and reorient itself as the vital laboratory of lebensformen. It is the only way it can stop feeding the beast of omnivorous financialization of bios and start producing the present without just perpetuating the status quo. Art is a force of love.

Alessandro Bava is an architect and writer based in London and Naples, Italy.
Contemporary Artdebtinstallationmarket
Comradeship, Love and Heroic Constellations

Essay / Politics
A proposition for radical love, a call for radical heroes, in the name of social justice and anti-fascist resistance
Europe After Brexit

Essay / Politics
What lead UK to Brexit and how can we imagine another future from amidst the wreckage?