Body / Building is a group exhibition reflecting on the concept of urban space not only as a given, physically defined space

Many factors contribute to the configuration of urban space, which is always the result of an act of interpretation and the object of a representation. Offering a plurality of visions to those who approach it, the density of this non-neutral space is the starting point of Body / Building, through the works by Augusto Alves da Silva, Werner Feiersinger, Steffani Jemison, Ugo La Pietra and Ree Morton. The relationship between the human body and the urban landscape is not only the subject of the works gathered in the exhibition, but also crucial in determining the artist’s observation point, and acts as a guide for an intimate approach to the environment.

Ugo La Pietra’s Attrezzature urbane per la collettività (Urban furniture for society) is a series of eighty drawings, developed in Milan between 1977 and 1979, aimed at overcoming the barrier between public and private space. The project stems from the exploration of the city, and the identification of aesthetically inconsistent urban elements, such as road signs, posts and chains, concrete bases, with no other functions than being markers of separation and constriction. Reflecting on the motto “living is being at home everywhere,” these elements are photographed, redesigned and converted in La Pietra’s tables, with irony and visionarity, into pieces of domestic furniture, transforming a “space to use” in a “space to live”—how explained by the artist himself. That is how a no waiting sign becomes a comfortable dressing table with a mirror, or a bollard is turned into an elegant coffee table in the shade of a tree. 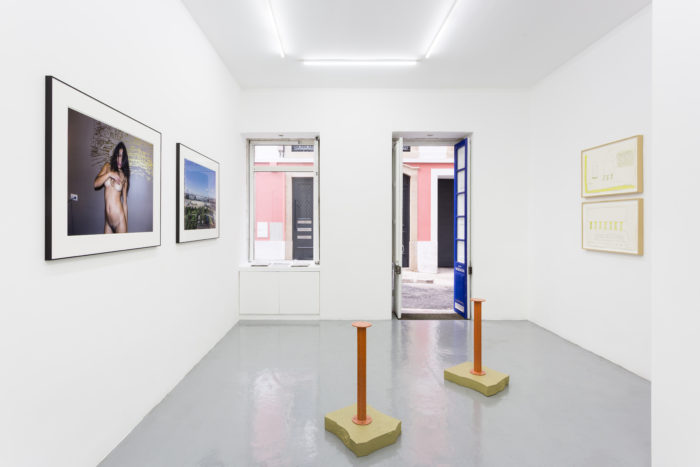 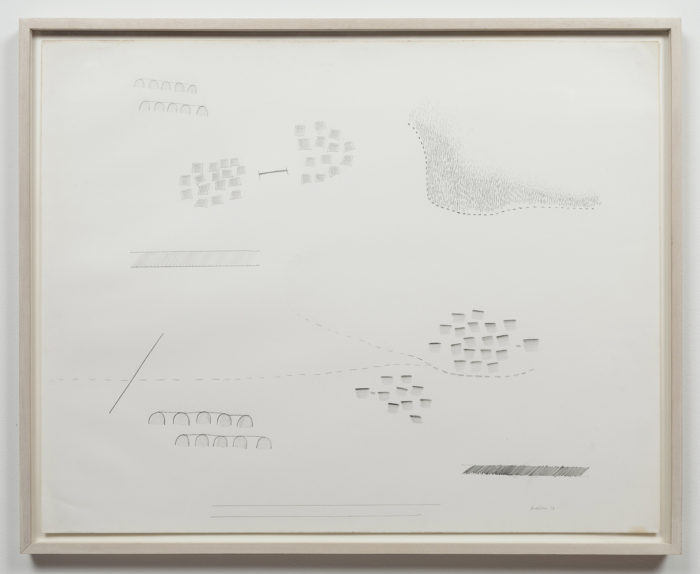 Ree Morton’s varied practice, focused on the mutual relationship between inside and outside, is rooted in drawing, a medium she uses to probe and filter the experience of the actual territory, letting signs and fragments emerge, giving shape to an intimate cartography of memory, vaguely reminiscent of the situationist psychogeographical maps in which chunks of the city are connected by lines and arrows. In Untitled (1972), some recognizable elements derived from a landscape—a fenced flowerbed, a path, small arcades—are scattered on paper, connected by lines and dashes, which are turning them into abstracted diagrams, vibrant depictions of energetic fields. Untitled (Rudofsky I and II) (1972) is a diptych inspired by vernacular architecture, in particular by granaries, of a kind present in Galicia and in the Portuguese rural area of Lindoso, and another kind in some African regions, as reproduced in Bernard Rudofsky’s book Architecture without Architects (1964). The graphic depictions of the granaries, as well as the quotes from the book that accompany them, emphasize the anthropomorphism of these structures, seemingly able to move around, even to dance, equipped with a hat and small columns at their base. 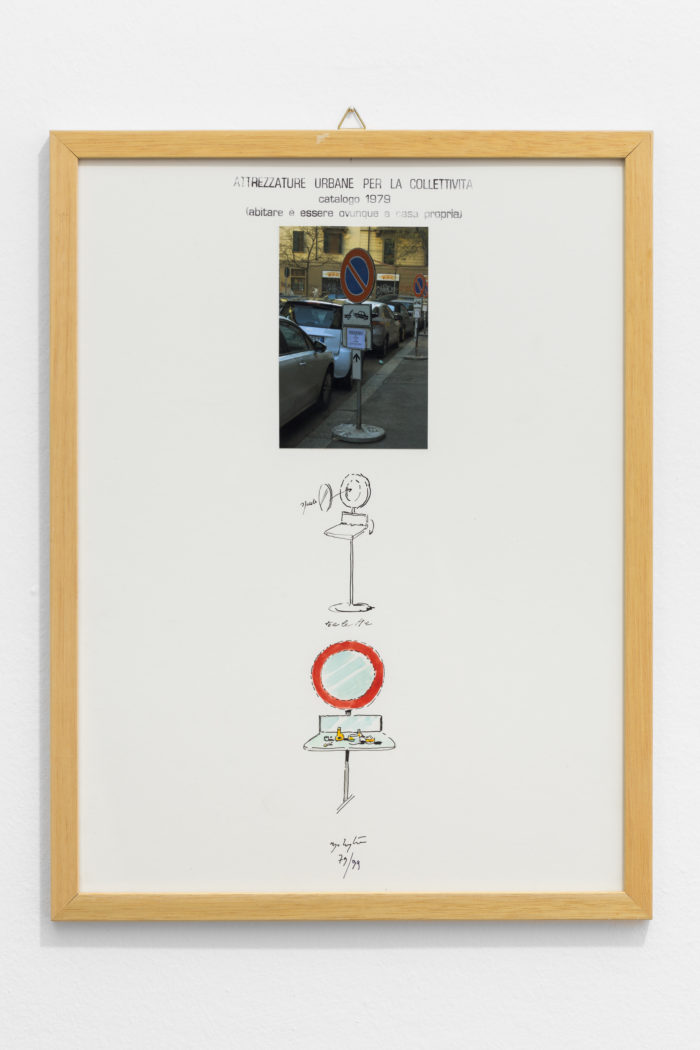 At the base of Werner Feiersinger’s practice is a deep relationship with architecture. His sculptures draw inspiration from architectural models, urban furniture, and everyday objects, whose shapes and surfaces are polished and rarefied to the point of maintaining only a loose proximity with the object of origin. Revealing the essential geometry or structure of specific urban elements, this process of abstraction and reduction resets their functionality, while the use of bright colours and perfectly smooth materials highlights their aesthetic value, critically pointing to the imposition of a stereotype or a canon, of a theoretical model on the utility value. Untitled (1992) is composed by two orange steel stakes, each one fixed on a polyester base, looking like a piece of a scaffolding tube structure, almost torn from the road’s surface, while the blue grid of Untitled (2010) forms a simple volume reminiscent of modern architecture or minimalist sculpture, made ambiguous by the presence of the plastic insert. 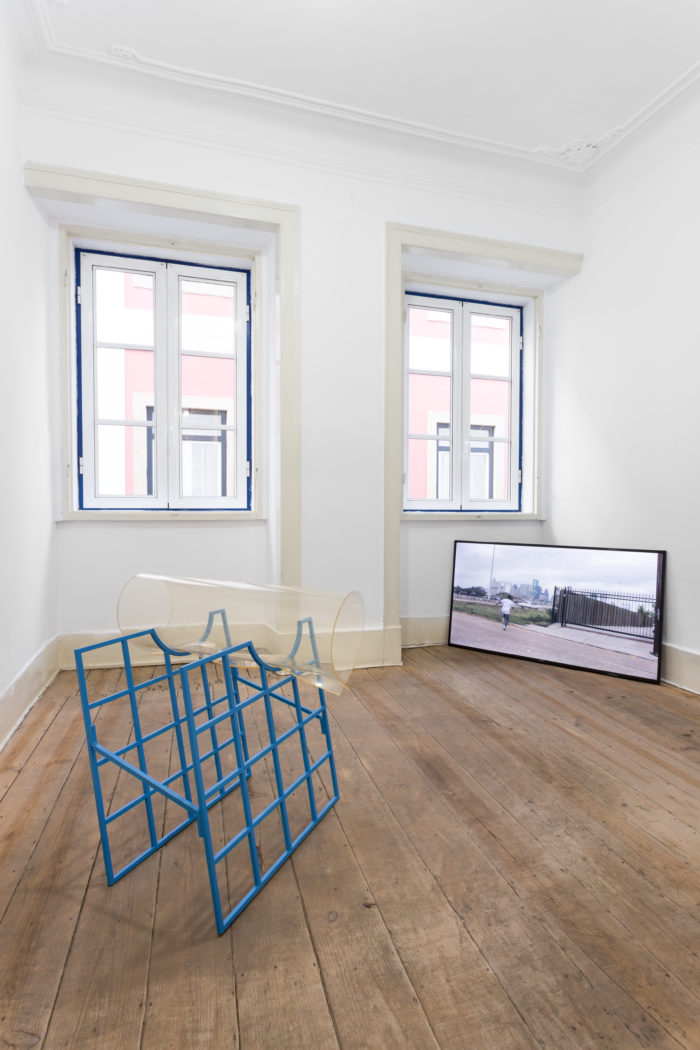 As stated by Augusto Alves da Silva in an interview: “the landscape I photograph fascinates me as something where a wide range of signs belonging to a certain society can be read, or as a place in time where people are and how they build or un-build things, leading me into a reflection on how societies think, organise themselves and function.” Far from being a work confined to the genre of landscape, his triptych Paradise City (2017) shows three different views that interplay with each other, revealing how the artist’s personal imagery is linked to the idea of a city: a view of Paris, taken from an unusual perspective, is placed next to a female nude behind which one can see the drawing of a landscape traced with golden paint on the wall, probably evoking the kitsch decoration of certain hotels, and to what seems to be an aerial view of a desert land, whose dimensions and distance can not be clearly perceived, and which seems to be a human settlement. For the particular framing and angle, in the photograph Untitled (2015) a cruise ship seems to be parked on the asphalt of the parking lot, or assimilated to a real building while the human presence, attested by a couple right at the center of the composition, becomes almost invisible.

Steffani Jemison’s video Escaped Lunatic (2010-11) shows four young men running across the screen and through the streets of Houston as if they were being chased by someone or engaged in a hard training, as they jump, flip and roll on the ground, sometimes to avoid urban furnishings which, rather than defining the route, become obstacles. The frenetic rhythm of their bodies launched in this race, with its unpredictable deviations and sudden turns, is superimposed to the regular flow of traffic, and to the static urban scenario that serves as a background to an action that stages the cliché of the figure of the fugitive, still repeated today, as the video suggests by making the point of departure coincide with that of arrival. 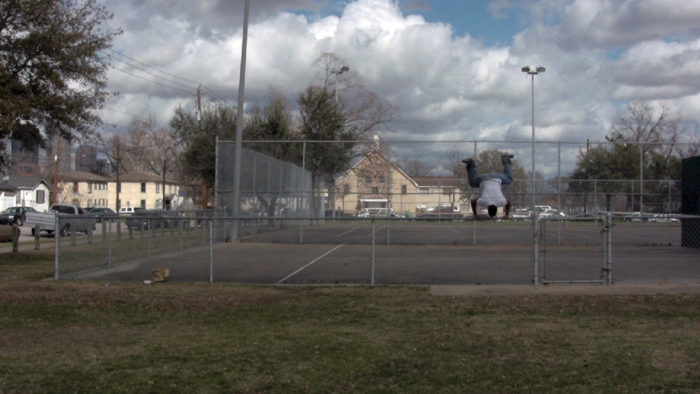 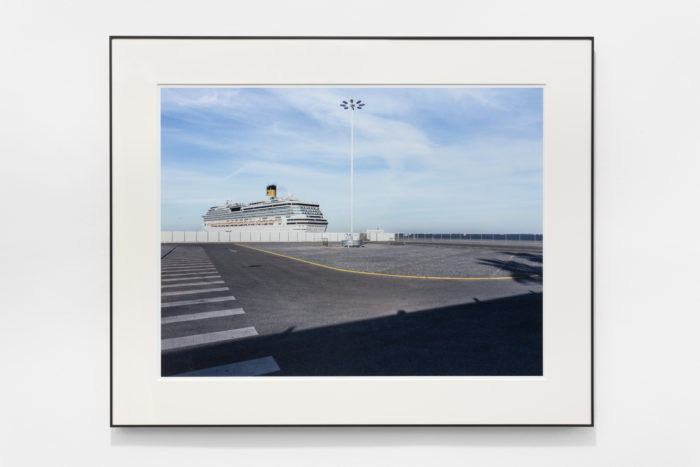